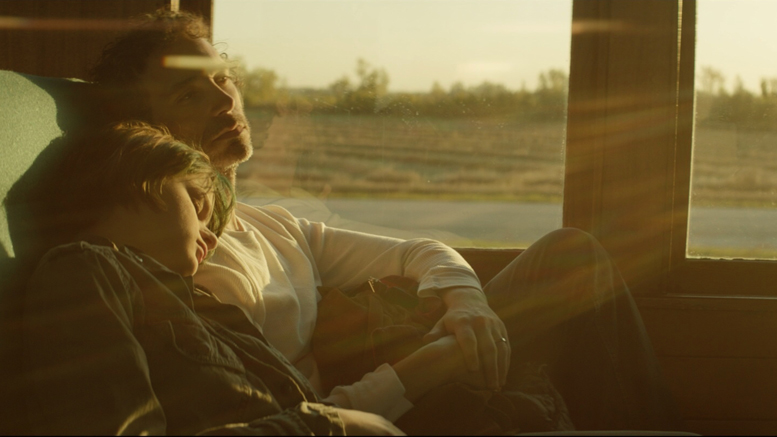 U of M alumni Jonas Chernick has written, produced, and starred in his latest upcoming film, Borealis – set to debut in Winnipeg on April 15 at Grant Park Cinema.

Borealis is a film about a pathologically lying, gambling-addicted, and debt-ridden father who is determined to ensure his daughter sees the northern lights before she loses her sight. 15-year-old rebel Aurora is aware of the seriousness of her condition but her father is untruthful about how long she will still be able to see. In a last attempt to give his daughter something she will appreciate, he decides to take a road trip to Churchill, MB, shadowed along the way by his lies, addiction, and debt.

The film is unique, emotional, and humorous. It is well led by Chernick and young actress Joey King and you feel very attached to the characters and storyline. The themes of the movie are very heavy, so the humour tends to be dark, but it is so honest and relatable (even if many of those in attendance haven’t experienced either characters’ struggle personally).

Your sympathy is traded off between characters because they’re not only struggling with their own issues, but the issues of their family as well – another relatable theme. It’s beautiful, unpredictable to the last minute, and well-made. I do not compare this to other small-scale films but all films when I say that this is a great movie.

Since graduation, Chernick has racked up quite the resume – including acting roles in films and television, as well as writing and producing award-winning pieces.

Chernick wrote, produced, and starred in My Awkward Sexual Adventure, which had its world premiere at the 2012 Toronto International Film Festival and was subsequently named one of TIFF’s Top Ten Films of 2012.

Chernick also won a 2015 Canadian Screen Award for Best Lead Actor in a Mini-Series for his portrayal of Daniel Addison in the CBC’s critically acclaimed The Best Laid Plans.

His recent appearances include the 2012 feature Blood Pressure, an episode of season two of FX’s Fargo, and a guest star role in the upcoming second season of the SyFy series Dark Matter.

Chernick says that the department of English, film, and theatre at the U of M has helped him to continue his art by creating an encouraging community where he could find his voice, explore the media, and take chances. He learned to think about film critically in the film program and through his analysis, he was able to identify and create his own aesthetic.

Chernick was also cast in the lead role of the first play he auditioned for at the U of M’s Black Hole Theatre Company.

“This was, to say the least, transformative,” said Chernick.

“It was an unparalleled confidence booster, a springboard that encouraged me to take risks and trust my instincts. I met so many people over those four years who inspired me, who influenced me, and with whom I collaborated on a multitude of projects with – many of whom remain my collaborators today.”

Chernick lives by the Winston Churchill quote “success is walking from failure to failure without loss of enthusiasm.”

“I love this quote. Life as an actor is filled with rejection. That’s the nature of the beast. You have to love it unconditionally, and not allow your happiness in life to be tied into whether you got the part or not. And you have to give yourself the freedom to take risks, joyously, regardless of the outcome.”

How to watch a WNDX Film

Hey there, it’s your future calling