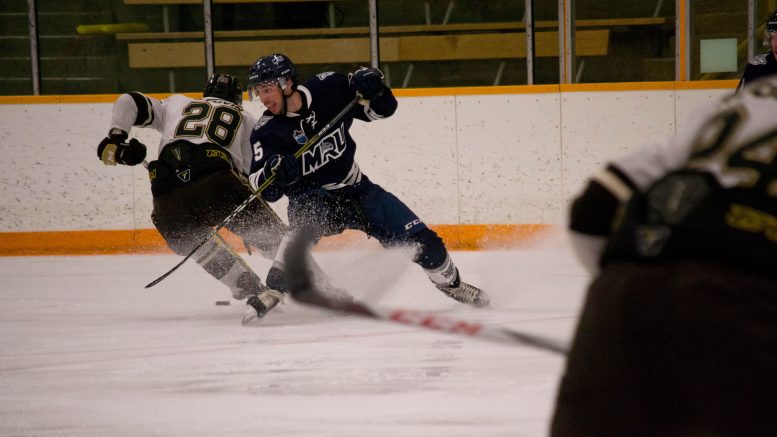 This weekend the University of Manitoba men’s hockey team swept the Mount Royal University Cougars at the Wayne Fleming Arena. Manitoba won 4-1 on Friday, and came out on top in a close 3-2 game on Saturday.

Manitoba is now 4-4 on the season, sitting in fifth place, two points back of fourth placed University of British Columbia in the Canada West.

Michael St. Croix led the way for the Bisons with his first two goals of the season in the 4-1 win and notched an assist to finish with three points.

“I thought that you could tell right from the opening shift that he really came to play tonight and really competed hard,” said Bison head coach Mike Sirant.

Both teams were able to generate high quality scoring chances throughout the first period but the home side was able to strike first, nine minutes into the first, with Adam Henry burying his second goal of the year off a beautiful feed from St. Croix.

Penalties proved costly for the Bisons late in the period as Mount Royal was able to capitalize on a 5-on-3 power play with just 2:24 remaining in the first period. Connor Rankin  netted his first goal of the season.

In the second period, the physical play started to ramp up for both teams in what was a back and forth affair. The Cougars were dominant and hemmed Manitoba in their own zone for much of the first half of the second, but the Bisons’ relentless forecheck found its legs in the later minutes of the period, putting sustained pressure on Mount Royal. The wave of momentum was capped off by a goal for the Bisons when St. Croix scored his first goal as a Bison off a feed from Zach Franko  to give Manitoba a 2-1 lead.

The two teams kept up the back and forth play throughout the third period, which resulted in quality scoring chances for both teams with Manitoba capitalizing on a tally from St. Croix from Lucas Skrumeda  late in the third period. Byron Spriggs stood tall between the pipes for Manitoba, keeping the lead in tact for the Bisons despite numerous breakdowns and turnovers in the defensive zone, which resulted in opportunities for the Cougars. Liam Bilton iced the game with 17 seconds remaining with an empty net goal.

St. Croix broke out on Friday, and on Saturday it was Franko’s night, as he scored two goals, including the game winner with a minute remaining in the game.

“He’s a very talented offensive player with tremendous speed, he can put a lot of pressure on the opposing defence with his speed and puck skills,” Sirant said. “He’s got an amazing shot and you can see it on the goal that he scored.”

Manitoba jumped out to a 1-0 lead in the first period, with Franko’s first of two goals on the powerplay, a  first period which had the Bisons only direct three shots on goal and spending the majority of it hemmed in their own zone.

“We expected there would be a push back from Mount Royal so we knew that they would come out very strong in the first period,” Sirant said. “We bent, but we didn’t break and we got the goal which was good for us and we said ‘hey, we got to elevate our play.’”

The Bisons did elevate their play, with Brett Brooks scoring off a terrible angle three minutes into the second frame. Mount Royal was not dead yet, with Cougar defenceman Maddison Smiley scoring off a backdoor feed late in the second to cut the lead in half.

Mount Royal knotted the scores early in the third with a picture-perfect snipe from Tanner Olstad after a behind-the-back pass from Jamal Watson. Franko played the hero for Manitoba on the powerplay, firing top shelf from the left faceoff dot to give Manitoba the win.

The Bisons are on a bye this weekend and will play the University of Regina Cougars in Regina on Nov. 10-11.