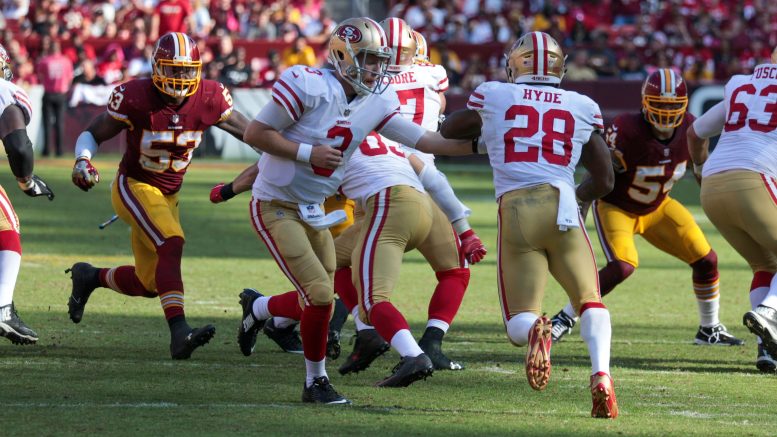 The San Francisco 49ers have had a spooky season. Photo by Keith Allison.

The Fantasy prof is back again, and the second half of the season has begun. It’s also the season of Halloween and pumpkin spice everything. Quick survey, how many people are sick of pumpkin spice? Raise your hands. Just as I thought – EVERYBODY. Just kidding, I’m sure there are many out there who enjoy that seasonal spice derived from the orange, squash-like fruit. But more importantly, it’s Halloween. It’s time to be scared. So in the spirit of Halloween, here are some fantasy football related scary thoughts:

I’m scared of the Green Bay offence without Aaron Rodgers.  How will it affect all his supporting players?

I’m scared of anything Arizona related with Drew Stanton a s QB. Stanton looks more confused as an NFL Quarterback than Jack Nicholson did in the hedge maze at the end “The Shining.”

Okay, the Jacksonville Jaguars defence is downright scary. No joke.

Speaking of the Miami Dolphins, somebody call an exorcist.  Jay Ajayi is possessed by a demon that turns football players into complete busts.

Have you heard that song Werewolves of London? Or seen that movie American Werewolf in London? Well, the Cleveland Browns played in London. They were actually looking like a real, human football team, and held the lead in the game with the Vikings. Then, the full moon came out and the monster took over. I’m afraid the Browns may not win a game all year.

Is it just me, or does Andy Dalton look a bit like Chucky?

Ezekiel Elliott’ s up and down legal status is frightening to many fantasy owners.

If your team is 0-8, your fantasy season is probably in the sewer. Your players can now spend some quality time with Pennywise from It.

I have seen the Walking Dead, and they wear gold and red. I’m afraid the San Francisco 49ers might not win a game this year.  Through Week 8, it appears San Fran is where fantasy points go to die.

Carson Wentz could be fantasy football’s QB1 by end of season. He’s the Halloween candy that keeps on giving. Preferably, peanut butter cups and no Eat-Mores.

But what can be really scary for some fantasy owners is the second half of the season. How can they negotiate all the bye-pocalypses coming up? How can they make that late season surge to make the playoffs? These are all issues we will address in upcoming lectures.

In the meantime, be rest assured that October is over, and so is Halloween – and possibly, pumpkin spice. That haunted house is no longer haunted; it’s just an old house with cobwebs and bad plumbing.

For some, your fantasy teams are doing really well.

For others, the horror show will continue. One can only hope – to take a note from the TV show “Stranger Things” – that no matter your record, there’s plenty of time to turn your fortunes upside down.

Gearing up for the fantasy playoffs – part two