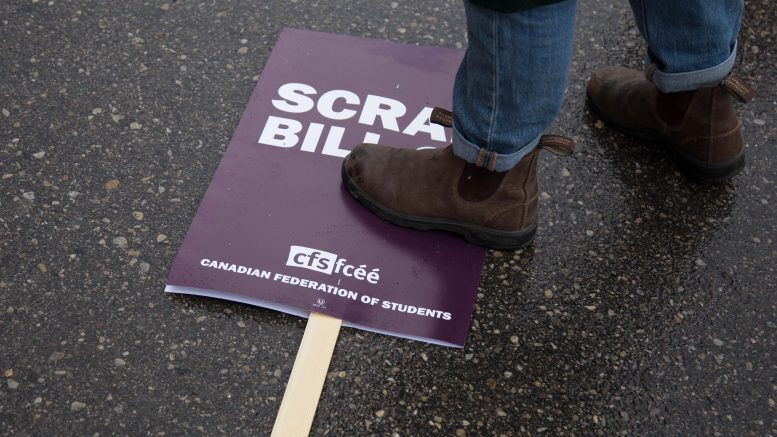 Motion to hold plebiscite on whether to continue CFS membership passes with an overwhelming majority Nov. 9.

The University of Manitoba Students’ Union (UMSU) approved a motion at its Nov. 9 meeting to prepare a plebiscite – a non-binding referendum – for January 2018 asking UMSU members whether they wish to continue their membership with the Canadian Federation of Students (CFS) membership.

The motion was initially moved by Arthur Coelho Reis – representative from the St. Paul’s College Students’ Association – in August and was referred to the UMSU governance committee.

A motion to “continue [the] current relationship with Canadian Federation of Students,” moved by aboriginal students’ representative Noah Wilson, was defeated at UMSU’s regular council meeting in August.

The plebiscite will ask students: “Do you believe UMSU should remain a member of the Canadian Federation of Students, at a cost of $14.98 per student per year?”

UMSU president Tanjit Nagra said that the motion follows a confrontational relationship between UMSU and CFS.

“I was very clear with UMSU council that I need direction from them to know how to work effectively with the CFS,” Nagra said. “This was the outcome.”

“A plebiscite is a non-binding referendum,” she added, “and this is merely an avenue to get the student opinion on what has been a very controversial issue.”

UMSU demanded an apology from CFS in December, claiming that its executive members verbally harassed Nagra. The harassment allegedly took place after UMSU brought forward a motion that would amend CFS’s policy on international students, calling for the national union to advocate for international student fee increases to be locked at the same percentage increase as domestic students.

Nagra said that now that a plebiscite has been set for the winter term, students will be properly informed on the subject of the plebiscite “through their student email as ballots are sent this way through [online] voting.”

Nagra added that although a plan is yet to be set, “the [UMSU] marketing team will be creating a plan to share information effectively with students – including the use of our social media platforms, and other traditional means of marketing, such as posters, newspapers, etcetera.”

Annie Beach, aboriginal student commissioner for CFS-MB, said it is “unfortunate” that UMSU is considering its relationship with CFS.

“I think it’s too bad, because I think CFS does lots of work here at the U of M,” she said. “And especially if [Bill 31] has passed it’s probably good to keep that relationship with the CFS to make sure that we do as much as we can for students here.”

Bill 31 passed its third reading with a majority early Friday morning. The Advanced Education Administration Act lifts a cap on tuition hikes that has held increases to inflation since 2012 and will remove restrictions on course related fees. Universities in Manitoba will be free to increase tuition fees by up to five per cent plus inflation annually beginning September 2018.

Speaking on the motion, Coelho Reis said the plebiscite “will allow us representatives to democratically survey our membership on their opinion on the matter.”

“The motion passed on Thursday is to democratically offer the students an opportunity to direct their representatives on how pursue a resolution on the matter,” he added. “I believe I can speak on behalf of most councillors when I say that we will continue to do our best to advocate on the behalf of our membership.”

Nagra said that while she cannot speak on decertifying at this point, UMSU itself is involved in other federal advocacy efforts.

“I was in Ottawa this past week on Parliament Hill with student unions from other [research intensive universities] and we are lobbying the federal government with various asks pertaining to undergraduate students, Indigenous students, and the Canadian Federal Students Loans Program,” she said.

U-Pass returns for U of M students