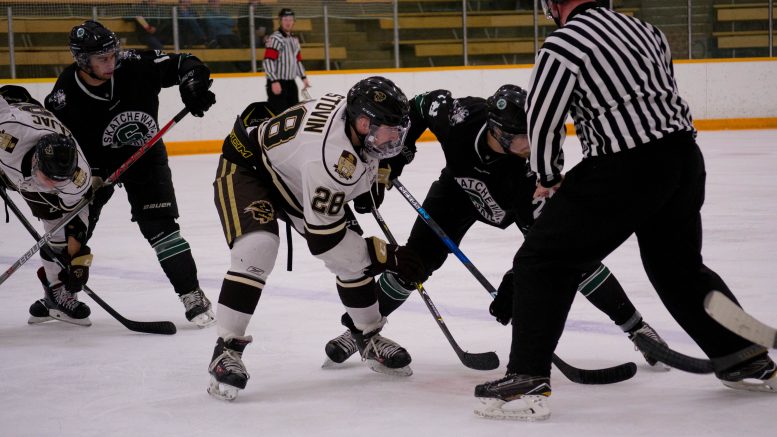 This weekend the University of Manitoba men’s hockey team hosted the third-ranked University of Saskatchewan Huskies and earned a split after a 4-3 win on Friday and a 6-0 loss on Saturday.

Manitoba is now 2-4 on the season and sits in sixth place in the Canada West with four points.

It was Zach Franko’s night on Friday, as he scored his first ever goal as a Bison in overtime to give the Bisons a 4-3 win.

“It’s gratifying to see Zach score that winning goal,” said Bisons head coach Mike Sirant. “He’s been playing well but the pucks haven’t been going in for him, so what a better time to get his first for us.”

Bison captain Brett Stovin rushed in from the Huskie blueline, found Franko wide open on the opposite faceoff dot, and Franko made no mistake.

“I just put myself in a good spot and [Stovin] made a good pass,” Franko said. “We practiced that play a little bit with me on the side there when we have kind of a pulled goalie and stuff not 4-on-4 but I knew where it was going and fortunately it went in.”

Bison winger Nick Zajac opened the scoring for the Bisons on the powerplay in the first period, firing a shot through the wickets of Huskie goaltender Taran Kozun. Saskatchewan got two back later in the period, including a shorthanded goal from Huskie forward Josh Roach.

Bison winger Shawn Bowles levelled the score early in the middle frame, whacking home a rebound for his first of the season.

The Huskies regained their lead through Kohl Bauml early in the third period. With 30 seconds to go, Bison defenseman Adam Henry made a nice rush into the Huskies zone and fired a pass across to Stovin. Stovin had his shot go off Kozun’s pad and the rebound deflected off Kamerin Nault  into the back of the net to tie things up with 15 seconds remaining. Byron Spriggs was busy all night, making 34 saves in the win for Manitoba.

It was a different type of night on Saturday, with the Huskies roaring back with a 6-0 victory to salvage their weekend.

The Huskies scored two goals in each period, punishing the Bisons for their lack of defensive zone coverage, as Spriggs was left out to dry on multiple occasions.

“From my perspective, it was the play in front of both nets,” Sirant said. “We had some good chances early in the game but couldn’t get the puck by [Jordon Cooke]. Our net coverage was not good tonight.”

There was no love lost between these two Prairie rivals, with both teams combining for 158 minutes in penalties.

“It’s a long and intense rivalry,” Sirant said. “I guess some of our frustration set in, we talked about that we wanted to keep competing regardless of what the score was and we did get into some of the stuff after the whistle.”

With the score 4-0 after two periods, Sirant elected to put Dasan Sydora into the game – his first action of the year. The Huskies had no intention of giving Sydora a nice welcoming party, with Bauml scoring 45 seconds into Sydora’s season debut. Parker Thomas fired a home a sharp-angle one timer to finish the scoring off halfway through the third.

Manitoba will host the Mount Royal Cougars on Oct. 27-28 at the Wayne Fleming Arena.

The life and career of Joe Daley