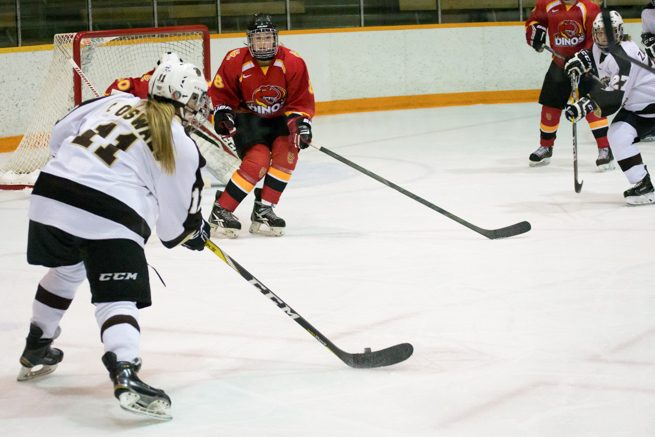 Following a lopsided weekend where the Bisons swept the University of Lethbridge, the herd were back on the road to close out their season series against the University of Calgary Dinos. Manitoba won 4-2 on Friday night and edged the Dinos 2-1 on Saturday; the Bisons now sit in second place in the Canada West, eight points behind UBC.

Entering Friday night’s action, the Dinos were still fighting for a playoff spot, but these dreams were dashed by a 4-2 Bison win.

Manitoba opened the scoring midway through the first off the stick of Courtlyn Oswald. Oswald stepped out from behind the net and ripped a backhand shot over the blocker of Kelsey Roberts.

Lauryn Keen extended the Bisons’ lead in the second with her seventh goal of the year. Jayden Skoleski’s shot was stopped by Roberts but the rebound found its way onto Keen’s stick who made it 2-0.

The Dinos clawed back into the game with two goals a minute apart. First Sara Craven used a spin move to elude defenders, putting a shot past Rachel Dyck. A minute later, Merrissa Dawson unloaded a slap shot on goal and her shot hit Kira Makuk in front, deflecting past Dyck to tie the game 2-2.

Manitoba took over in the third, shutting down the Dinos offence. Jordyn Zacharias got her team back in front. Venla Hovi scooped up the puck, taking it end to end and dropping it to Zacharias. Zacharias got the puck in tight, sneaking a shot by Roberts to make it 3-2 Bisons.

Keen picked up her second of the game with an empty netter as the herd took the game 4-2. The loss knocked the University of Calgary out of the playoff hunt.

Saturday afternoon the Bisons were back on the ice looking for the weekend sweep. Roberts stood on her head for the home side, but the Bisons pulled off the 2-1 win.

Game two of the weekend was scoreless throughout the first 30 minutes of the game, and it was Calgary who got out ahead first. Dawson got the puck down low from Cheyann Newman and put a shot on goal. Dyck got a piece of it, but bobbled the puck and it somehow found its way behind her.

Roberts stood on her head, stopping 27 Bisons shots across that 30 minute span, but the 28th got through. Karissa Kirkup of the Bisons got in on goal, used a nifty move on Roberts and ripped one by her. The goal was Kirkup’s seventh of the year and tied the game 1-1.

The Bisons got the lead late in the second on the power play. The Hovi, Keen, and Zacharias line was at work again. Hovi got the puck down to Keen who fed Zacharias in front. Zacharias settled down a hot puck firing home the 2-1 goal.

The 2-1 score line held, as the Bisons walked away from the weekend winners of four straight.

With three points on the weekend, Keen gains a cushion atop the Canada West scoring race. She now sits at 28 points on the year, four points ahead of Alberta’s Alex Poznikoff.

The Bisons will be back at home on Feb.3-4 for a matchup against the fourth-placed Saskatchewan Huskies.

Time to ‘dump and change’ from traditions