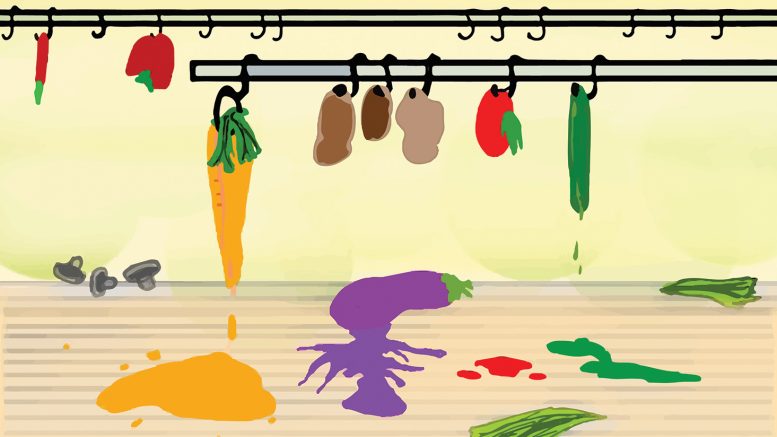 Winnipeg’s first vegan festival, VegFest, took place Sept. 16. I attended the lecture by Carol J. Adams, where she discussed her book – The Sexual Politics of Meat: A Feminist-Vegetarian Critical Theory – and walked away feeling politically empowered.

During her presentation, Adams spoke of the origin of her veganism: when her childhood pony died in a shooting accident. While mourning her loss, she found herself eating meat and realized she was eating more than a packaged meat product – she was eating an animal.

Animals had provided Adams much solace and comfort over the course of her life; she realized she could no longer ethically participate in the cruelty they faced in factory farms and slaughterhouses, whatever they churned out – food, clothing, or entertainment.

Veganism is more than a personal cause. Rather, it is deeply political and extends far beyond hipster culture and the mundane act of making meals. Veganism is an answer to the tyranny of the meat industry: an industry predicated on the exploitation of both animals and women.

Adams identifies the massive marketing apparatus that upholds the meat industry as culpable for a sexualized politics of meat that integrates animal cruelty, sexism, and racism into a single whole. Part of the reason these oppressive phenomena have such reach and impact in society is because we are socially conditioned to accept these ideas through the deluge of marketing media we consume in our daily lives.

Insidiously, the meat industry’s marketing engine is fueled by the male gaze. Many of the advertisements Adams featured in her lecture showed the ways in which meat is associated with masculinity: strength and sports, whereas plant-based diets are marked as feminine.

Not only this, but Adams connected meat-eating to women’s sexuality. Chickens, cows, and pigs are often depicted in sexualized ways, wearing traditionally sexualized garments like garters and high heels. On top of this, women are depicted as submissive sexually and performatively – all while near animals or animal corpses, or as they eat meat. This creates a link between the literal consumption of meat and the figurative consumption of women’s bodies.

On my way home from VegFest, I passed by a bar & grill called the Tipsy Cow, which became disturbing to me as I remembered Adams’ idea of “the absent referent.” The absent referent is when the meat one eats is removed from its origin: the cow, the pig, the chicken, and so on. Perhaps it is this disappearance of the animal that makes eating meat so much easier. Perhaps it is the fantasy of ignorance, that makes you think the animals you are eating live free lives – free from violence and abuse.

In the context of this bar, the Tipsy Cow, the absent referent is the woman. The cow represents the woman. The tipsy cow: the tipsy woman. A tipsy woman, a drunk woman, in the space of a bar inevitably leads me to think about sexual assault. It’s easier to name a bar Tipsy Cow than it is to name a bar Tipsy Woman. I’m not saying that if you are a woman drinking, you are inevitably more vulnerable to assault – but I think in this culture, some people, be they aggressors or victim-blamers, might think you are.

We must remain vigilant of the ways in which meat exists in relation to alcohol when it comes to sexist portrayals of women. Part of this relation is the way objectification targets women through depictions of femininity where women are deconstructed and presented as isolated body parts in order to appeal to the male gaze.

Another normative form imposed on women’s bodies are pouty lips, half-lidded eyes, and prominent eyelashes, which were all too common in advertisements of cows, pigs, and chickens. Additionally, I noticed the hair on pigs were removed in their depictions, which again suggests what is desirable in women: hairless bodies. An unrealistic standard: have you ever tried shaving your legs? It takes forever.

A sexual politics of meat does not need to focus exclusively on sex and sexuality, however: it also intersects with race. Many of the advertisements that Adams showed depicted pigs that were pink or white, even if this is not always the case in nature. This suggests the kinds of meat, or women’s bodies, that are desirable in a North American context: white women’s.

While anti-racist feminists fight the food fight against sexism and racism, and vegans expose the rampant animal cruelty in the meat industry, rarely do we acknowledge the three ills outlined above as intricately intertwined. As unrealistic and racialized beauty norms are reinforced for women within the framework of a sexual politics of meat, radical action against any part of this leviathan requires radical action against all of it.

If you are in a position of privilege, with the power to exercise more food-conscious decisions, then you simply ought to. While such a moral obligation might be waived for people lacking the financial resources and time required to be vegan or vegetarian, it becomes harder to justify supporting the meat industry the more freedom one has in the food market.

Some ways to try out a vegan or vegetarian diet is to try it for a week or two – you may learn many new favorite recipes – as well as sampling plant-based meals at restaurants to get recipe ideas.

Take action and help the people and animals you care about.

Get to know the Arduino

Private schools a haven for hatred and bigotry