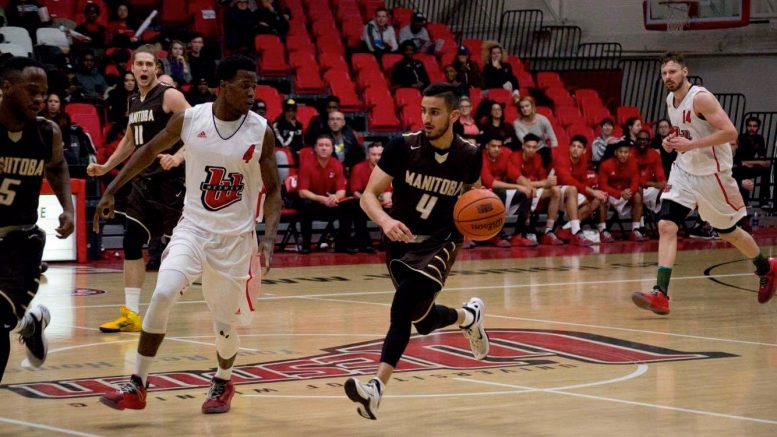 AJ Basi in action against the Winnipeg Wesmen last season.

Little did Basi know, a chance encounter just a few months ago would mark the first step toward making his goal a reality.

Basi was having lunch with his cousin at the Forks when a man named Yorick Parke walked by. Basi’s cousin happened to know him from their time playing together for the Winnipeg Wesmen basketball team. After a few minutes spent catching up, the topic of Basi’s pro aspirations became the subject of discussion.

Basi was particularly interested in playing in England due to the fact that his mother was born there and he has family in the country. Prior to his fifth year with the Bisons, he also applied and successfully received British citizenship.

Parke’s response ultimately became the golden ticket Basi had been looking for.

“He was an agent who lives in Toronto right now, and so we exchanged our information,” Basi said. “He actually ended up going to the league in England that I wanted to play in. He played there for like a decade, and he’s like, ‘Hey listen I have a lot of connections there, I know a lot of people, I think we can work together.’”

Just under a month ago, Parke was able to follow through on his words.

“He’s like, ‘Hey I think a team’s interested in you,’” Basi said. “An hour later, I’m just sitting watching TV, I get an email on my phone and it was the team sending a contract, and that was that. Within a day it was all done with.”

Basi will be playing for the Newcastle Eagles, competing in the British Basketball League – the top league in England.

“I’m pretty fortunate to be going into a great situation in my rookie year. Newcastle is the most winningest franchise in the league,” he said.

“To be able to find myself in that position, joining the team in my first year, it’s all I could ask for really.”

Newcastle’s roster is comprised of players from all over the world, each bringing a wealth of experience to the team, either from their previous campaigns with the Eagles, or simply their broad basketball backgrounds.

“We’ve got two to three guys with a lot of NCAA experience and had great careers there and they’ve had multiple years as a pro now,” Basi said. “There’s a lot to learn from the point guard position, the wing players and just all the veteran players on the team.”

“They’ve [the Eagles] been doing this for a very long time and the fact that they’re a successful franchise, I’m going in with my eyes open and my ears ready to listen to try and get better.”

Basi officially landed in England on Aug. 29, with the team’s first regular season game scheduled for Sept. 29. The regular season continues through April, with playoffs beginning in May.

While it is a marathon of a campaign, Basi was able to pinpoint a positive aspect.

“[The schedule is] a little bit longer in duration, but the one thing is, that’s kind of nice is that there’s no back-to-backs like there was in Canada West,” Basi said with a laugh. “So I’m happy about that.”

Treading in the right direction

Barrels of fun with Fargey