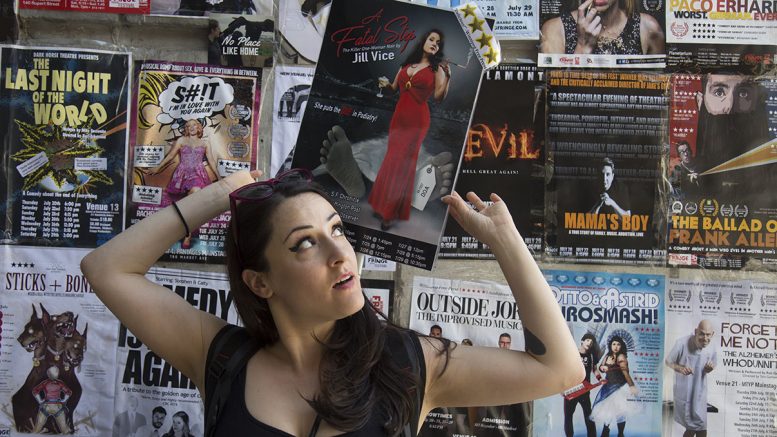 The one and only star of A Fatal Step, Jill Vice promotes her show amongst a sea of posters. For solo performers like her, hustling up an audience is a big part of the Fringe Fest experience.

Whether it’s handing out flyers, performing free monologues for strangers in lineups, or promoting yourself on social media, many performers at The Winnipeg Fringe Theatre Festival have to devote a large amount of their time drumming up an audience for their show.

While this is a reality for all Fringe Fest productions, many solo performers face a particularly strenuous challenge – promoting their show on their own.
Fringe Fest is celebrating its 30th anniversary this summer, and in those 30 years has grown to become a veritable powerhouse in terms of size – it’s the second-largest event of its kind in North America.

Within its 188 shows are found every genre imaginable, with shows dedicated to comedy, horror, drama, and even shows about Fringe itself.

A particularly unique breed is the one-person Fringe performance.

Many of the shows are written, directed, advertised and performed by just one person. Quite a few are autobiographical, and all of them seek to tell a story.

Part of the story, however, is behind the scenes of the solo Fringe performance.

The Manitoban spoke with several solo performers at this year’s Fringe Fest on what goes into the Fringe Fest hustle, and just how much work goes into curating an audience for a show on your own. Young performers search for empty spots for their posters along Main street. With 188 shows at Fringe Fest, competition is tough and attracting an audience is a team effort.

There is a sense of selling one’s self in the act of building an audience for a one-person show. Most solo performers do all of their own “flyering”– the colloquial term for handing out programs and other small items while encouraging crowds to come and check out your show.

Ryan Adam Wells, who has done eight Winnipeg Fringe Festivals, but whose current show, Beers About Songs, marks only his second year in solo performance, believes that there is an art to flyering.

“You’ve got to be able to pitch the show in a way that sounds appealing to people,” Wells said.

“So basically, you’re condensing an hour-long show into a three-second sentence. Something that’s enticing, that people want to see, and that can start a conversation.”

“The more you connect with somebody,” he added, “the more likely they are to see your show.” With flyers in hand, actor Jem Rolls hits the busy lineups on a quest to sell The Inventor of All Things.

The amount of time performers spend flyering and otherwise drumming up an audience varied from person to person. Wendy Froberg, another solo performer who stars in A Woman of a Certain Age, admits that “quite a lot” of her day is spent just on creating and maintaining viewer interest.

“I think I’m a believer in that personal touch,” she said.

“Posters are fine, program is fine, I try to work shows on a regular basis in terms of the lineups. Every hour, I’m looking for something or I’m at something, and in between you’re doing social media and other kinds of things to promote your show. So it’s pretty constant.”

Erin Rodgers, a performer who hails from Toronto and whose show Tough focuses on her personal journey leaving her comfort zone,  also spends several hours every day  engaging with strangers while handing out flyers and rub-on tattoos.

Rodgers noted that while newer, alternative methods for building a viewership such as social media can be an influential factor in getting her show out there, it still takes a backseat to the personal intimacy that building an audience for a show at the Fringe calls for.

“I think social media is part of it,” Rodgers said.

“It’s like, if I had a bow and arrow, it’s one of my arrows. Also, I love Instagram, I’m a big, big fan of it, so we have a lot of fun doing silly things on Instagram.

“But I do think there’s nothing like meeting people face to face. You get to connect with people, and get them excited about the show. I think it all works together. Honestly, that’s also my favourite part.” Aussie street performer engages the audience through comedy to score some extra cash in the hat.

One of the most common obstacles many Fringe performers seem to face – and to some extent, common to many performers in general – is overcoming shyness or anxiety.

These feelings can be exacerbated when you are the sole performer in your own show, and the onus is on you to speak with strangers and drum up a dialogue in hopes of building an audience.

TJ Dawe, who is at Fringe this year performing his self-directed show Roller Coaster, has been involved in over 100 fringe festivals. In that time, he has created his own coping mechanisms to combat these feelings.

“That kind of thing doesn’t come easily to me at all. I’m very shy, and I find it quite difficult to engage with strangers,” Dawe said.

“I’ve been doing this for twenty years. So at the beginning, I had to overcome that, and get out of my shell and do it. And the way I tricked myself into doing it was to turn it into a performance. So I would turn engaging with people in lineups into this fast-talking pattern.”

Dawe has what he describes as a “kind of organic” set audience, which he attributes to a combination of his shows’ quality, and the word of mouth that comes with decades of building a brand.

He no longer does any flyering.

“It’s not like I sell out every show,” he said.

“I could be making more money if I was out hitting the lineups every day, I just choose not to do that, because it takes so much energy from me.”

Struggles aside, there was a common thread that united every performer interviewed: the desire to create art that engages the audience. The Fringe Fest provides a sort of symbiotic relationship – performers provide a service in terms of entertainment and enlightenment, and viewers, hopefully, respond.

Rodgers has had a particularly warm response from Winnipeg audiences, and has found that now and again, people will actually come up to her and ask to see her flyers and inquire about her show, something that she says is unique to the city.

“You know where you’re in a movie, and someone walks in, and they’re the popular kid, and everyone’s like ‘tell me more!’