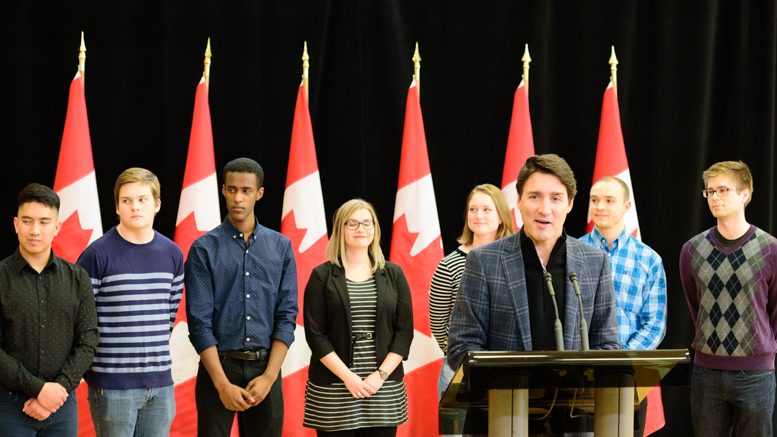 Get the brownie batter mixing, folks. We’ve got a landing date for marijuana legalization.

Okay, maybe put the batter in the freezer for the time being.

Finally, Trudeau government officials have confirmed that this month they will announce legislation to legalize the recreational use of weed by July 1, 2018.

Obviously, this is a cause that many young Canadians from coast to coast have been fighting for and whining about for years, if not decades. So much so that giving Canadians the right to light up a bowl or roll a joint was a central promise during Justin Trudeau’s election campaign, designed to lure young Canadian voters and portray the Liberals as Canada’s youthful party.

Well, we were pretty darned sure that the Conservatives were never the party to represent young people and in 2015, the NDP were busy pandering to centrist baby-boomers, so the Liberals’ plan worked.

Was it Trudeau’s charming smile? The selfies? The “youthful energy”?

Young Canadians voted Liberal because now, more than ever, we care about what goes on in Ottawa and Trudeau made promises to our generation that appealed to our struggles and realities.

Turns out many of those promises were as hollow as the pipes we’ll soon be legally blazing out of.

According to extensive polling data from Abacus, three of the seven main issues young Canadians wanted prioritized over the legalization of recreational weed were “creating better job opportunities for young Canadians” (63 per cent), “making college and university more accessible/affordable” (60 per cent), and “dealing with climate change and the environment” (39 per cent).

Legalizing the recreational use of marijuana fell to 20 per cent. Further, when asked if marijuana legalization was their top priority for the new Liberal government, only four percent of Canadians aged 18-24 said yes.

If marijuana fell so low on the list of priorities, then surely the Trudeau Liberals have spent the first 16 months in power working hard to deliver better job opportunities for young Canadians, more affordable tuition, and a feasible climate change strategy, right?

In another attempt to sway young, disillusioned voters, Trudeau promised to create 40,000 “good youth jobs” each year over a three-year period. He would achieve this by investing $300 million in a renewed youth employment strategy.

In 2016, only 9,000 part-time jobs for Canadians aged 15-24 were added to the economy after 40,000 full-time jobs were lost that year and 49,000 part-time jobs were created, according to data from Statistics Canada. Assuming that part-time gigs at Dairy Queen or the local supermarket aren’t what Trudeau considers a “good youth job,” it’s fair to say that the strategy is a pretty huge flop.

To boot, in 2016, the Liberals invested $164.5 million in the youth employment strategy and in this year’s budget, which was tabled last month, the Liberals committed to an additional $395.5 million for the program over the next three years.

That means in total, the Liberals will spend $560 million over four years on a strategy that – according to the numbers we’ve seen so far – doesn’t seem to be working.

Who knows? Maybe the marijuana dispensary business will fill that void of 31,000 youth jobs per year. I’m not ready to put my money on it, though. That is, if I had any money, which I don’t, because I’m a millennial student.

And what about affordable and accessible post-secondary education? Well, the Liberals were far less committal during their election campaign on this front.

They did, however, promise and deliver on increases to the maximum amount low-income students can receive from the Canada Student Grant and lifting of the two per cent funding cap on the Post-Secondary Student Support Program for Indigenous students.

These achievements, however hard-fought-for by the groups who lobbied for them, are nowhere near enough to combat Canada’s huge student debt levels or aid provinces that are experiencing perpetual growth in post-secondary enrolment and facing financial hardship when it comes to providing adequate funding for their universities and colleges.

The federal government should listen to student leaders calling for them to set up a dedicated transfer system to subsidize provincial grants and thereby make funding more robust, much like the federal health transfers that provinces rely on to keep hospitals and clinics running.

This, in tandem with a continued provincial post-secondary grant support, would keep tuition at more affordable rates, and prevent the sort of fee increases we’re about to see here in Manitoba.

Maybe the feds could redirect some of those hundreds of millions of dollars that are currently earmarked for a struggling youth-jobs program. Just an idea.

Oh, and the environment? That pesky matter of climate change threatening our country and planet? Has the Trudeau government been making enough of a decisive effort to combat the most pressing dilemma of this generation and generations to come?

The approval of the Trans Mountain and Line 3 pipelines, which combined will pump nearly one million more barrels of oil from Alberta per day, dispelled any hopes that this government placed caring for the environment high on its priority list.

Yes, there’s a carbon tax coming, and yes, Trudeau signed the historic Paris climate change agreement to keep global warming below two degrees Celsius this century. Those acts alone, however, do not translate to tangible efforts to reduce Canada’s carbon footprint or transition the country to a green economy.

Instead, it seems the Liberals are focusing on a different kind of green.

So, young Canadians, rejoice. We may not get any good jobs, an affordable education, or be left with an Arctic, but that first legal toke on Canada Day 2018 will be so worth your vote.

The Liberals owe young Canadians their majority government. Trudeau, who by the way is also the minister of youth, has an obligation to address the issues youth are facing right now. Otherwise, the Liberals shouldn’t be worried that young people won’t go to the polls in 2019 – they should be worried that we will.

Students react to university’s response to sexual violence on campus

Lieutenant-General Roméo Dallaire at the University of Manitoba