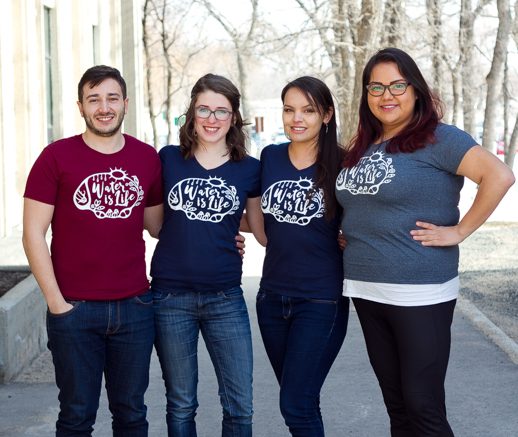 A group of first-year University of Manitoba law students are throwing their hat into the debate over North American pipeline construction.

The Student Pipeline Action Committee (SPAC), which formed in January, emerged out of a constitutional law course that drew upon the then-ongoing Standing Rock protest in North Dakota.

Thousands of protesters contested the construction of the USD$3.8 billion Dakota Access Pipeline – which has since been completed under the Missouri River – for more than six months.

The blockade drew international attention to Indigenous land rights in North America. The United Nations recently issued a report critical of the United States’ handling of the project, including its failure to consult with the Standing Rock reservation which draws water from the river.

Between August 2016 and February 2017, some 700 protesters were arrested in an enforcement response that at times turned violent, including the use of rubber bullets, tear gas, and water cannons in sub-zero temperatures.

“The example that was posed to us – which is actually a very real possibility – was that similar protests and blockades will erupt here,” said SPAC executive member Danielle Morrison.

In January, the Assembly of Manitoba Chiefs filed a motion in court challenging the Enbridge Line 3 Replacement project. The more-than-1,600 kilometre pipeline – which will run from Hardisty, Alta., through southern Manitoba and into the U.S. to Lake Superior – was approved by the National Energy Board in April and given the go-ahead through a Nov. 25 order-in-council.

“There is a real possibility that more conflicts will be occurring on our side of the border here in Canada,” said Morrison, citing the potential resistance to the Line 3 development.

“We’re just gearing up for that – what can we do to help, if we need money raised, and where can we put the money.”

The SPAC held its inaugural meeting in February and struck a fundraising campaign selling tee-shirts to support the Water Protector Legal Collective, a team working to provide advocacy and support for protesters, branded water protectors.

“Law students are always looking for an opportunity to practice and refine our skills,” Morrison said.

“I definitely think we are going to continue having those conversations about what we can do as law students to help out and also what we can be doing within the University of Manitoba.”

Drawing off the water protector theme, Morrison said she created a woodland-style design in the vein of Anishinaabe artist Norval Morrisseau projecting the very simple message: “water is life.”

She said the group plans to host regular fundraising drives and foster a dialogue around the “critical battle against pipelines in North America.”

SPAC is also building relationships with other like-minded organizations, including Divest Winnipeg, and aims to assist communities fighting to protect their Indigenous territories.

“The problem that I’ve always come across with these types of legal issues is that people don’t understand what their rights are,” she said, adding that while the students can not provide legal counsel, they can offer guidance and support.

“That’s what we do as lawyers – we help people understand what are their rights in these scenarios.”

The next SPAC general meeting is scheduled for March 28 at noon in room 207 in Robson Hall.

She said SPAC provides a valuable space for an open discussion on pipeline construction and broader conversations around resource extraction and Indigenous land rights.

In November, Seymour was among a contingent of U of M students that travelled to Standing Rock to support the community’s protest.

“We were there to stand in solidarity with the Sioux, with the Lakota, on their lands and to help in any way we could,” she said.

“I couldn’t believe my eyes,” she added. “There were just thousands of people – everywhere – people were coming in constantly.”

Seymour said the conversation around resource development needs to reach deeper than a simple economic question of money versus water toward a more serious examination of what will be left behind.