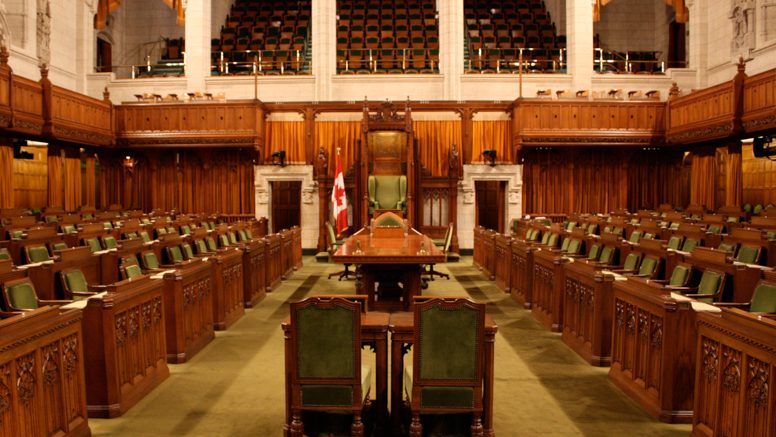 Interior of the House of Commons.

When Liberal MP Iqra Khalid tabled M-103, a parliamentary motion that calls on the Standing Committee on Canadian Heritage to study and recommend solutions to discrimination, systematic racism, and Islamophobia in Canada, Conservatives as the official opposition were quick to cook up a slew of implausible arguments against the motion. The Tories deemed it vague and the first step toward implementing Sharia blasphemy laws, which would supposedly penalize those who criticize Islam.

The Tories didn’t stop their slippery slope argument there. They’ve called M-103 an infringement on free speech and a motion that unfairly favours Muslims and Islam. Yet, curiously, Tories took no issues when they unanimously voted in support of a parliamentary motion in 2015 that deservedly condemned anti-Semitism. Nor did the party raise an uproar on limiting free speech when Tories unanimously supported an anti-Islamophobia motion tabled in Parliament last October by NDP leader Thomas Mulcair.

Most Conservative leadership candidates have spoken out against the motion, including the “tell-it-as-it-is” celebrity business mogul Kevin O’Leary, who bravely called M-103 “a slap in the face to other religions.” But Kellie Leitch won this round by going all out in her protest, launching an online petition to stop the motion with an image of a little blue-eyed girlphotoshopped from their original brown – with “M-103” taped over her mouth whilst standing in front of a background image of the 2014 Parliament Hill shooting.

And, just to score political points, Conservatives tabled their own version of M-103 last week. It called for a condemnation of all forms of racism and intolerance. It specifically avoids mention of Islam and the discrimination Muslims face in the West.

But, through their coldly-calculated ignorance, the Tories have missed the point entirely. To begin, let us break down M-103.

Simply put, M-103 is not proposed legislation. It merely asks the federal government to: recognize the need to end “increasing public climate of hate and fear;” condemn Islamophobia and all other racism and religious discrimination; request the Standing Committee on Canadian Heritage to study how the government can develop strategies that work to reduce and eliminate systematic racism and religious discrimination, including Islamophobia; and collect data in order to provide context for hate crime reports.

An important point to recognize is that M-103 is a motion, not a bill. And so, the Conservative Party’s fears are not only unwarranted, but also irrational. Whether or not M-103 passes is irrelevant to Canadian law.

If M-103 passes, no changes will be made to the Canadian legal code. There will be no new legal limitations on the freedom of expression or speech in any way, nor will the government be compelled to take legislative action, and the Canadian Charter of Rights and Freedoms will remain untouched. This means that the motion contains no new legal recourse for anyone who decries and publicly rails against Islam and Muslims.

M-103 is an opportunity for members of Parliament to use their platform and take a clear stance against growing intolerance and hatred, and to demonstrate how systematic racism and religious discrimination need to be taken seriously. It must be made explicit by our representatives that Islamophobia has no place in Canadian society whatsoever. A watered-down version of the motion will miss the point entirely.

A wave of anti-Muslim sentiment has swept throughout Europe and the United States and has inevitably made its way into Canada. The shooting in Quebec City that left six Canadian Muslims dead and the recent anti-Muslim rally in front of a Toronto mosque that called for a ban on Islam  did not magically appear out of thin air. Islamophobic rhetoric seems to be rising at an alarming rate and hate crimes against Muslim-Canadians have more than doubled over a period spanning 2012-2014. And as recent events have shown – such as Brexit and the American election – populist right-wing outbursts precede spikes in police-reported hate crimes.

Growing irrational fear and hatred of Muslims doesn’t seem to be going away any time soon. A case in point is the numerous threats and repulsive racial slurs that MP Iqra Khalid received after tabling M-103, which includes a YouTube video where she was threatened to be recorded while others shot her.

More than ever, there is good reason to specifically single out Islamophobia when discussing intolerance in Canada today, especially as thousands of Syrian and Iraqi refugees – most of whom happen to be Muslim – are making Canada their home.

Arguing that “no religion should be singled out for special consideration” aligns Conservatives with the counterproductive “All Lives Matter” movement. It prevents us from recognizing that these problems exist, that these problems are urgent, and that these problems need to be addressed as soon as possible before another fatal tragedy falls into our hands. To oppose a motion that calls for solidarity with Muslim Canadians is both silly and dangerous.

It is clear that Tory ethics need to be straightened out. Conservatives must recognize that tapping into Canadians’ worst fears by arguing that M-103 will result in anti-blasphemy laws and limits on free speech is a dangerous game to play. The ploy may win them a few extra seats in Parliament, but it is a costly trade-off. It is up to the Conservatives to figure out their priorities. Whether human dignity will beat out cheap rhetoric is something that remains to be seen.