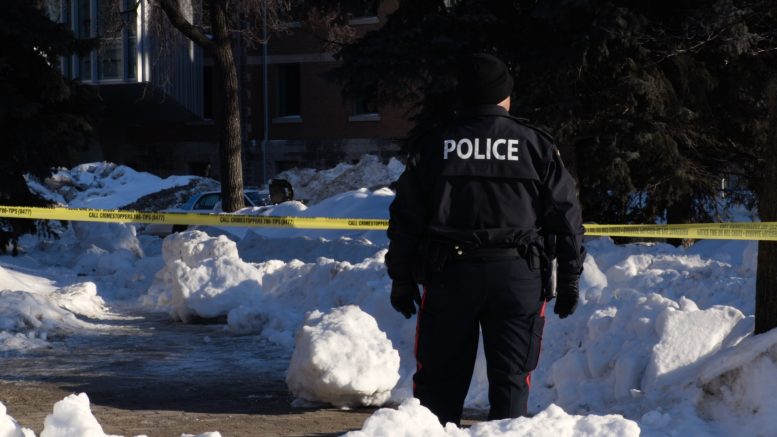 A police officer at the scene of an attack on a transit operator at the U of M's Fort Garry campus. Photo by Soraya Atayee

A 22-year-old man has been charged with second degree murder following the death of a Winnipeg Transit operator who was stabbed multiple times in an early morning attack on the University of Manitoba’s Fort Garry campus Tuesday.

Brian Kyle Thomas was remanded in custody after appearing in a Winnipeg court this morning. He is facing additional charges of possession of a weapon and failure to comply with a probation order.

University officials said he has no evident association with the university, either as a student or staff.

Thomas was apprehended on the frozen Red River by a Winnipeg Police canine unit shortly after a confrontation on Dafoe Road – directly across from Taché Hall – which left 58-year-old Irvine Jubal Fraser critically injured after he was stabbed numerous times. He later died in hospital.

At a press conference this morning, Winnipeg Police Const. Jason Michalyshen said he could not confirm media reports that Thomas was asleep on the bus but said the accused refused to exit the vehicle when it reached the end of service.

Michalyshen said Thomas was asked multiple times to leave before being escorted off the bus.

“This individual refused to comply and became, obviously, confrontational, until this erupted to a very serious physical confrontation,” he said.

Police were dispatched shortly before 2 a.m. University of Manitoba campus security were first to the site and held the scene until police arrived. The university has staff on campus 24-hours daily.

The incident has renewed discussion surrounding the safety of Winnipeg’s transit operators, with drivers calling for increased security measures.

While Michalyshen could not say if violent incidents between operators and the public are on the rise, the Amalgamated Transit Union (ATU) local 1505 reported to CBC in the summer that 2015 saw incidents more than double.

“Unfortunately this brutal murder is not an isolated incident,” said Larry Hanley, president of the ATU International, in a release issued from Silver Spring, Maryland.

“Countless numbers of transit workers are assaulted in many ways every year. Most are the result of a fare dispute, but an alarming number happen just because someone wants to do violence to a bus driver.”

In 2015, the University of Manitoba Students’ Union (UMSU) signed a contract with the City of Winnipeg giving students access to a discounted transit pass, dubbed the U-Pass.

The program more than doubled the number of U of M students who hold a transit pass, with more than 19,000 issued.

The UMSU executive issued a release Tuesday saying they thanked transit operators “for helping provide a pathway to our education and wish for their continued safety.”

“This morning’s tragic event has reaffirmed our collective commitment to building a stronger and safer campus for all students and members of our campus community.”

Events planned on campus as winter term kicks off