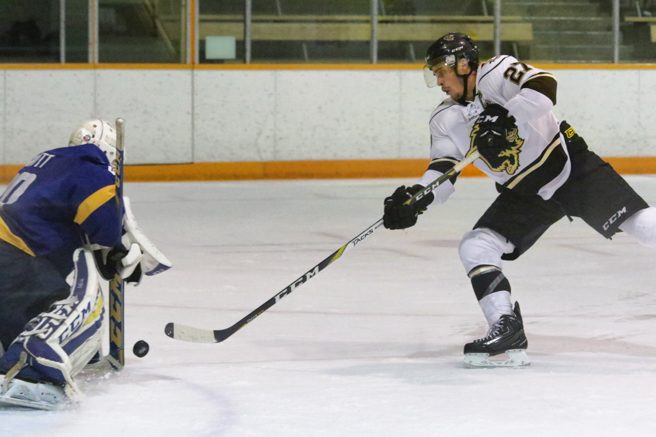 The second-ranked Saskatchewan Huskies have not had it easy this year against the Bison men’s hockey team. The Bisons are 2-1-1 against the top team in the Canada West after this past weekend. Manitoba fell 5-3 on Friday night, but shutout the Huskies 4-0 on Saturday.

The Bisons have clinched a playoff spot in the Canada West and sit in fifth place with a 13-11-2 record. They are four points back of Mount Royal for fourth place and a home playoff spot heading into the final weekend of the season.

The Huskies jumped out to a quick two-goal lead in the first period, getting goals from Jordan Tkatch and Josh Roach 53 seconds apart. Rookie centreman Remi Laurencelle got the Bisons on the board with his sixth goal of the year. The Huskies restored their two-goal lead late on with Levi Cable’s fifth goal of the season.

Saskatchewan added to their lead when Logan McVeigh scored his 13th goal of the year 3:56 into the second frame. Defenseman Blake Heinrich got his second goal in as many games on the power play for the Bisons to make it 4-2 after 40 minutes of play.

The Bisons cut the lead to one halfway through the third period after former Winnipeg Blue Brett Brooks fired home his second of the season. The Bisons pressed hard for an equalizer, but were unable to tie the game, and Roach sealed the win for the Huskies with an empty net goal with ten seconds remaining. Byron Spriggs stopped 27 of 31 shots in the loss for the Bisons.

After coming up short in the comeback on Saturday, the Bisons were able to blank the Huskies 4-0 on Saturday. The opening 20 minutes saw no goals scored for either team, with Saskatchewan outshooting Manitoba 12-7.

Liam Bilton opened the scoring for the herd halfway through the second frame with his third goal of the season. Adam Henry doubled the lead for the Bisons late in the second with Laurencelle and Nick Zajac picking up the assists on the goal.

Henry got his second goal of the game and sixth of the year in the third period on the power play. 24 seconds later Henry picked up his third point of the game with an assist on Warren Callis’ goal to make it 4-0. Spriggs was perfect in between the pipes for the herd, stopping all 36 shots he faced, earning him first star honours.

The Bisons finish up their regular season at home against the sixth ranked University of Alberta Golden Bears on Feb. 10-11.

Things you may have missed 20 years ago