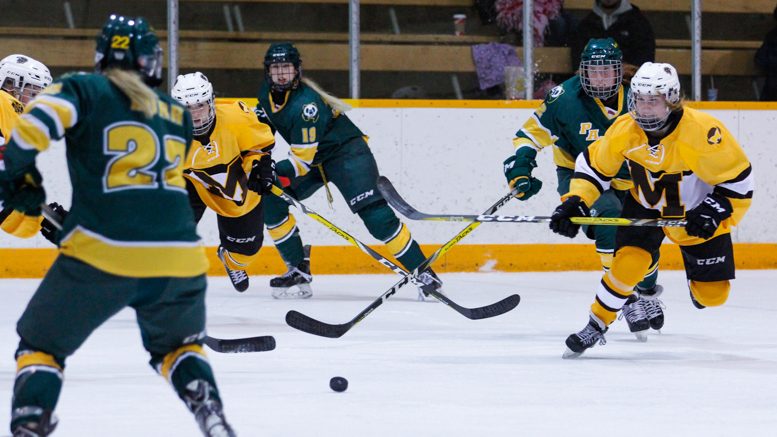 Following a quarterfinal sweep of the Mount Royal Cougars, the Bisons women’s hockey team were back in action in the semi-finals against the University of Alberta Pandas. The Bisons were swept by the Pandas, losing 3-2 on Friday, and losing by the same score on Saturday.

The Bisons were set on their heels early against the Pandas but battled back, and ultimately fell 3-2 on Friday night.

Alberta got on the board first thanks to defender Abby Benning scoring on the power play. Benning took a pass at the point, stepping into a shot from just beyond the faceoff dot. The shot glanced off the glove of Rachel Dyck and into the Bisons’ net for the early 1-0 Pandas lead.

Lauryn Keen of the Bisons got her team into the game early in the second period. Keen took a shot from below the goal line which snuck its way past Pandas goaltender Lindsey Post. Amy Boucher of Alberta answered a few minutes later, however, using a nice deke move to beat Dyck and make it 2-1 Pandas.

Alex Poznikoff of the Pandas scored early in the third period – again on the power play – to give her team a 3-1 lead. This was followed up by yet another power play goal by the Bisons, as Erica Rieder tucked a shot in tight by Post to cut the lead to 3-2.

Despite drawing close the Bisons couldn’t even things up, falling to Alberta 3-2 in game one of the best-of-three series. Special teams were the story of the game, as three of the five goals in the game were scored on the power play, with a fourth coming just as the offending player stepped back on the ice.

The Bisons were back on the ice Saturday, attempting to stave off elimination and force a deciding game three against the Pandas. The teams traded chances, but luck was on Alberta’s side as they were able to book their ticket to the Canada West conference final with a 3-2 win.

Benning got Alberta on the board first for the second straight game. Benning took a pass at the point unleashing a shot towards the goal. The shot blew by two Bisons and one Pandas player, sneaking under Dyck’s arm for the 1-0 lead.

The herd struck back in the second on the power play, the way they did it all series long. A pass from the corner by Alana Serhan went by two Pandas players to Karissa Kirkup, who was drifting into the slot. Kirkup ripped a shot low glove on Post to tie the game.

Alberta got back in front minutes later in odd fashion. A point shot missed the net and Dyck lost track of it, but Ashley Morin didn’t. She picked up the loose puck, rifling a shot off Dyck and in to give the Pandas a 2-1 lead.

Despite a 5-on-3 opportunity in the final few minutes of the game, the Bisons were unable to even the score, with Alberta snagging an empty net goal to make it 3-1. There was hope for the Bisons in the final seconds of the game, as Venla Hovi blasted home a point shot to bring her team within one.

However, this was as close as the herd could get and the Pandas took the game 3-2, winning the series in a two-game sweep. Alberta is now off to the Canada West final where all signs point to a showdown with the UBC Thunderbirds. The Bisons will head home as a promising season comes to an all-too-early end.

Bisons hope to rebound in second half of season

Winnipeg Jets push for the playoffs