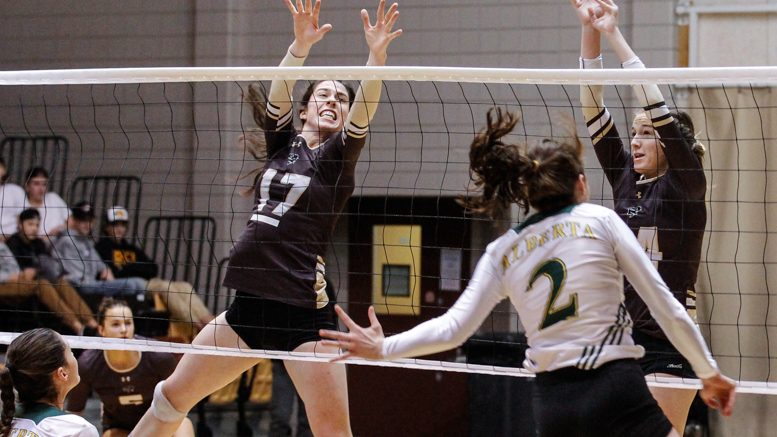 The first-ranked Bisons came into this weekend loaded with confidence. They dismantled the Griffins in straight sets on Friday. They had an impressive hitting percentage of .536 on the night, compared to the Griffins’ .175. Adam DeJonckheere hit a team-best 12 kills, with Devren Dear registering the only ace of the evening.

It was more of the same on Saturday, with the Bisons dispatching the Griffins in three straight sets once again. The Bisons were led by Evan Jackson this time, who hammered home 16 kills. MacEwan was not much of a test for the top-ranked Bison team, as they were dominated in almost every single statistical category.

The Bison women’s volleyball team saw another disappointing weekend, as they had their losing streak extended. Since beating the Winnipeg Wesmen on Jan. 7, the Bisons have yet to win.

On Friday, the Bisons lost in five sets. The teams exchanged set victories with the Griffins winning the fifth and decisive set 17-15. Tori Studler had 13 kills for the herd, with rookie captain Kearley Abbott hitting 12. Studler also registered a team-best 16 digs, along with Cassie Bujan who also had 16.

The Bisons still have an outside shot at making the playoffs, with two games remaining against the Trinity Western Spartans. Manitoba sits four points back of the final playoff spot, and will need a lot to go right for them in order to make the playoffs, starting with sweeping the Spartans, who are second in the Canada West with a 17-3 record.

The Bison volleyball teams have a week off before they head out to Langley, B.C. on Feb. 24-25 against the Trinity Western Spartans.