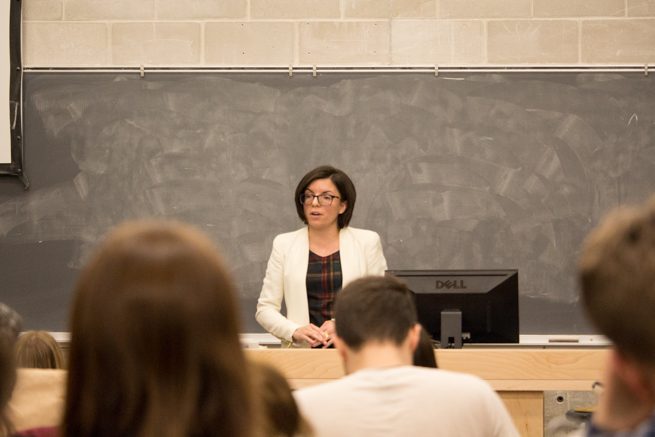 NDP MP Niki Ashton speaking at the U of W. Photo by Levi Garber

Youth unemployment in Manitoba is at its highest rate in more than two decades, according to data from Statistics Canada.

In December 2016, Manitoba’s youth unemployment rate dropped slightly to 13.1 per cent from its August high of 13.8 per cent, the highest it has reached since May 1996 and more than double the province’s overall unemployment rate, which stood at 6.4 per cent in December.

According to the data collection agency, the national youth unemployment rate in December remained unchanged from when the Liberals formed government in November 2015, at 12.6 per cent. The Liberals campaigned on a promise to create thousands of jobs for youth in 2015.

University of Manitoba associate professor of economics Janice Compton said she believes the numbers are part of a decade-long trend following the financial crisis of 2007-2008. Since the crisis, she said, post-secondary students are staying in school longer and entering the workforce later.

“Youth tend to remain in school longer during recessions, delaying entry into the labour market,” she said in an email. “I looked into this and there has absolutely been an increase in the proportion of those aged 15-24 who are in school full-time. This is data for Canada, but [there is] no reason to think that Manitoba is different.”

Compton also noted that although youth unemployment is trending higher in recent years, compared to the years following the recession of the early 1980s it is relatively low.

“If you extend back to 1976, it [is] not that the unemployment rate at the current time is necessarily high but that the years prior to the last recession were slightly lower than average.”

The report defines precarious employment as “having an outsized level of uncertainty, whether in terms of pay, ongoing employment, scheduling, or other dimensions.”

Delivering a lecture entitled “The Precarious Generation: Millennials Fight Back” at the University of Winnipeg on Jan. 18, NDP member of Parliament Niki Ashton said the struggles youth in Manitoba face in finding secure employment are similar to those of young people across the country.

“In terms of good jobs and how it’s difficult to access them did come up a lot in Winnipeg,” Ashton said, referring to a recent stop in Winnipeg during a cross-country tour on the issue of youth employment.

“What we’re saying is that this is a national emerging crisis,” Ashton said following her speech. “It requires national leadership and what better time than the time where the prime minister is [also] the minister of youth?”

Ashton – the MP for Churchill-Keewatinook Aski, NDP critic for jobs, employment and workforce development, and a University of Manitoba alumna – said the efforts made by the Liberals have not done enough to fight youth unemployment across the country.

“In December, I did ask [the prime minister] to resign as minister of youth because his government isn’t actually doing anything for young people,” she said. “Commitments that were made in terms of investment in employment opportunities haven’t materialized to the extent that they were committed.”

During the 2015 federal election campaign, the Liberals promised to create 40,000 “good youth jobs” annually over the following three consecutive years by investing $300 million in the Youth Employment Strategy (YES).

Once in government, the Liberals followed through with that promise in the 2016-17 federal budget and added an extra $165 million on top of the $339 million initially planned, bringing YES’s total funding to $404 million.

The 2016-17 federal budget was presented to Parliament in March 2016. Since then, the number of youth with full-time employment in Canada dropped by 10,000, while the number of young Canadians employed part-time increased by 28,000, according to Statistics Canada.

This ain’t your grandma’s record player

The election of Joe Biden is a victory for Canada