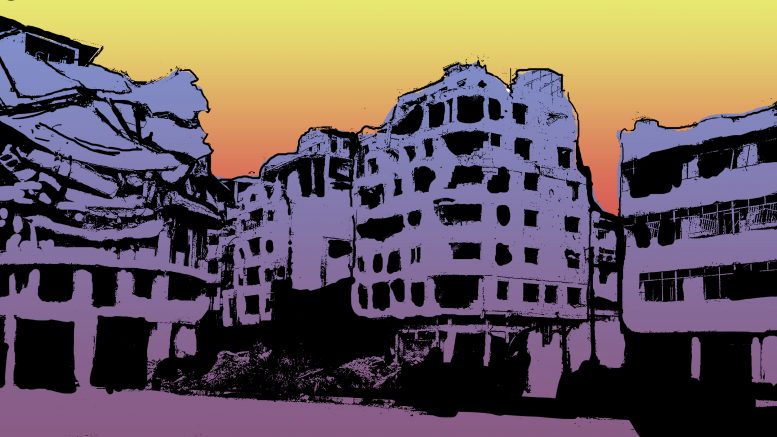 The Syrian conflict, one of the deadliest humanitarian crises of our time, has become synonymous with death, gore, and sheer hopelessness as war-torn images of Syrian cities dominate our front pages.

After nearly six years of fighting, between 300,000 and 450,000 people have been killed, more than two million are injured, and more than 65,000 have been ‘disappeared.’ 13.5 million Syrians are in need of immediate humanitarian assistance, and over half of the country’s pre-war population – over 12 million Syrians – have been displaced from their homes both within and outside of Syria, with more than half being children. These numbers are so large that it’s easy to become detached from the horror of the situation.

The world has done a very good job at numbing itself in response to never-ending breaking news on the refugee crisis, airstrikes, and most recently the fall of Aleppo. As this crisis drags on, one may feel lost, not knowing where to begin when it comes to understanding such a complicated and convoluted situation. But it is important that we take steps in learning and educating ourselves about the crisis. As we’ve witnessed in Aleppo, the silence of the world has cost too many lives and destroyed what was once a vibrant cosmopolitan city overflowing with rich history and cultures.

Most date the beginnings of the Syrian conflict back to the early months of 2011, when a group of teenagers were arrested and tortured in the southwestern Syrian city of Deraa for graffiti. The graffiti featured messages in support of the Arab Spring — a series of anti-government protests and uprisings that spread across the Middle East in countries such as Tunisia, Egypt, Yemen, and Libya. In response to a slew of peaceful demonstrators demanding the release of the boys, the authoritarian Syrian regime, led by Bashar Al-Assad, brutally cracked down on civilians, killing and imprisoning protesters.

Struggles for freedom and economic worries mixed with public anger over harsh government retaliation on peaceful protesters, adding to the demonstrators’ resentment of the oppressive Syrian government. The successful toppling of the Tunisian and Egyptian regimes fuelled hope among Syrian protesters, who continued to risk their lives as they flooded the streets calling for justice and liberty from a regime that had oppressed them for over four decades.

As months of peaceful protests were continuously met with military attacks on civilians, soldiers began defecting from the Syrian military, joining civilians to form the Free Syrian Army, and taking up arms to overthrow the government. This is how the conflict first became weaponized, making room for the involvement of interventionist foreign powers.

To understand the Syrian crisis, it is easiest to think of it in three levels. The first is the conflict between the Assad regime’s forces and the rebels who oppose the regime (who are divided into multiple groups, radical and moderate, that include local and foreign fighters with fundamental disagreements). There has also been the rise of Kurdish groups in Syria seeking autonomy from the Syrian state.

The second is the conflict with Daesh or the Islamic State (ISIS), which is a battle-ridden militant group that has risen out of the rubble of the decade-long war in Iraq. The third level is foreign intervention. It is difficult to pinpoint who is backing who, but while the Assad regime is supported by Russia, Iran, and Hezbollah (a Lebanese militant group), countries such as the United States, Turkey, Saudi Arabia, Qatar, and Jordan have backed moderate rebel groups diplomatically and logistically by supplying them with weapons to fight forces loyal to the Assad regime. At times Turkey, Saudi Arabia, Qatar, and Jordan have supported Islamist groups as well.

Foreign powers have involved themselves in the conflict for different reasons, and their involvement, which has prioritized violence over diplomacy, significantly worsened the situation in Syria and increased the death toll. For example, Russia, which is integral to Assad’s hold on power, has been blocking UN Security Council resolutions critical of the Assad regime and since 2015 has been launching airstrikes targeted at Syrian rebel forces – airstrikes which always seem to find their way into Syrian homes, hospitals, and schools. Despite international criticism, Russia continues to be a key ally to the Assad regime. As history has taught us time and time again, militaristic foreign intervention as a tactic to pacify humanitarian crises never works.

There has been international outcry in response to the crisis as haunting images and videos of refugee rubber boats capsized in the Mediterranean Sea or infants being pulled out of destroyed buildings continue to draw the world’s attention. However, international response has not been enough. The most prominent example has been the situation in Aleppo.

Aleppo, which is one of the oldest continuously inhabited cities in the world, has been stuck in the middle of the whole conflict. During the end of November, the Syrian army launched an offensive on Aleppo to regain control of the rebel-held eastern part of the city. This bloody end to a long battle culminated in what officials have called a civilian massacre by pro-government forces during a siege on the city.

Undoubtedly, it’s difficult to reduce what is happening in Syria to words printed on paper and there’s much more to the conflict which has been left out, but what the Syrian crisis has taught us is that we cannot be disillusioned with the idea that problems ‘over there’ are just that and have no effect on our lives right here. The crisis in Syria has had horrible global spillover effects: from the European migrant crisis, to the assassination of the Russian ambassador in Turkey, to the surge in ISIS-backed attacks across the world.

The international community has failed the Syrian people and we must act. While our attention to the Syrian crisis may only come in doses, rubber boats carrying fleeing refugees drown at sea, Aleppo remains a warzone, refugees across the world continue to suffer from this brutal and cold winter, and ISIS-backed attacks continue relentlessly. The situation may seem hopeless, but this should not be an excuse for us to remain idle.

First, and most importantly, we must continue to educate ourselves because the more we know about the crisis, the more we will understand its underlying causes and the more we are able to spread the word and mobilize to help those in need. Monetary aid is also crucial because donations are one of the only ways that many organizations working to help refugees are able to continue doing so.

The UNHCR, Unicef and the International Red Cross are among the bigger, more well-known charity organizations working to relieve the plight of refugees. There are also smaller organizations doing equally incredible work that we should support, such as the Migrant Offshore Aid Station, Refugees Welcome, Karam Foundation, and Hand in Hand for Syria.

We can advocate, fundraise, and use social media to call attention to the Syrian crisis and the suffering of the Syrian people. Lastly, we can take action within our own city to help. We don’t need to travel abroad to the shores of the Greek islands or refugee camps in Iraq, Turkey, or Lebanon to help Syrian refugees. Manitoba has received over 1,000 newcomers, some of which are still struggling to live stable lives, and so the least we can do is support them into their transition to their lives here in Winnipeg.

We can volunteer for organizations working with newcomers in Manitoba, such as the Immigrant and Refugee Organization of Manitoba, Newcomer Employment and Education Development Services Inc., and Manitoba Start, among others. From running a clothes drive, to starting up grassroots programs for newcomers, to even sponsoring a Syrian refugee, there’s so much we can do to help; it all starts with getting informed.

U of A, the Holodomor and the political nature of genocide recognition