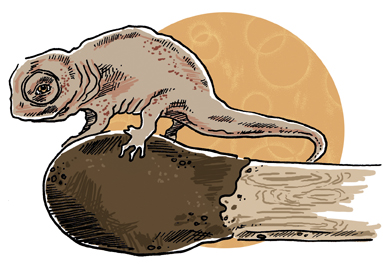 As we move deeper into the 21st century, we look further and further away from home for the scientific discoveries that shape headlines and shake our collective understanding of biology. From investigating water on the Moon, to hypothesizing about methane-based, hydrogen breathing life forms thriving in the liquid methane oceans of Saturn’s moon, Titan, to scrutinizing the 2,326 (and counting) exoplanetary candidates catalogued by the Kepler Mission for other Earth-like planets, astrobiologists have diligently carried on the cosmic search for new forms of life.

With all the glamour that goes with the hunt for extraterrestrial life, we sometimes forget there’s unknown life right here at home, just waiting to be discovered.

On Feb. 14, 2012 a paper describing four new species of leaf-chameleon native to Northern Madagascar was published in PLoS ONE (Public Library of Science) — an open-access online scientific journal — by a team of German scientists. The species described are part of a clade of diminutive ground chameleons catalogued under the group Brookesia minima — more commonly known as the Madagascan Dwarf Chameleon — and have been given the names Brookesia micra, B. confidens, B. tristis, and B. desperata.

The discovery of a new species is hardly shocking news to modern biologists — recent estimates suggest that 86 per cent of all land species and 91 per cent of all marine species yet await discovery and description, culminating in approximately another 1,200 years worth of job stability for taxonomists. These new chameleons have attracted international attention for their size and habitat. The appropriately named Brookesia micra — a derivation of the Greek word “mikros,” meaning “small” — has become particularily popular.

With males reaching a maximum snout-vent (from the tip of the nose to the base of the tail) length less than 20 millimetres, B. micra is, to date, the smallest known species of chameleon, and one of the smallest reptiles in the world. An image of a juvenile standing quite comfortably on a match-head has recently taken the internet world by storm.

Occurring in only two locations on the island of Nosy Hara, just off the northern coast of Madagascar, “mikros” is equally apt as a descriptor of the chameleon’s range.

“The island of Nosy Hara where B. micra occurs has a surface mainly made up by rocky, unforested terrain unsuitable for the chameleons,” co-author Miguel Vences, a professor for zoology and evolutionary biology at the Technical University of Braunschweig, told the Manitoban, “which are confined to a few canyons where trees are growing, and this is clearly below 50 hectares — much, much less than one square kilometre.”

A member of the team conducting the initial research on B. micra, Vences noted that although the distribution range of all animal groups has a tendency to reflect their physical size: “the extreme microendemism found in these and some other species, especially in northern Madagascar, seems to be exceptional.”

According to genetic research, B. micra may have occupied this remarkably small habitat for more than 10 million years.

Despite the public’s focus on B. micra, the other described species are not very much larger, having snout-to-vent lengths of 23, 29, and 30 mm for B. confidens, B. tristis, and B. desperata respectively. The researchers believe this miniaturization to be the result of “Island Dwarfism,” an evolutionary phenomenon attributed to the limited resources available on an island — in B. micra’s case, possibly the dwarfing of a dwarf, when an already miniaturized species moved from one island to another, much smaller one.

The discovery of the smallest chameleon in the world rides on the heels of a paper published a month earlier in the same journal, describing the smallest frog — and possibly, at seven millimetres long, vertebrate — in the world, found in Papua New Guinea by an American research team.

Asked about the possibility of discovering future miniaturizations of species, Dr. Vences wrote: “Yes, small animals are likely to be overlooked, so it might well be that other tiny species of amphibians, reptiles or fish are still awaiting discovery.”

Although B. micra’s name was given to reflect its diminutive size, the other three chameleon species were named to reflect their respective ecological situations and denote concern on behalf of the researchers for their habitats, “confidens” meaning “confident” in Latin, “tristis” meaning “sad,” and “desperatus” meaning “desperate.”

Brookesia confidens is lucky enough to find its range within a well-preserved and difficult to access nature reserve, offering a degree of protection to the species. B. desperata, on the other hand, has seen its habitat develop a number of human-influenced environmental issues, while the entire known range of B. tristis has been subject to deforestation and ecological damage.

“The habitat of tristis and desperata is being slashed and burned for firewood and local agriculture,” said Dr. Vences. “Since these animals depend on the leaf litter and the shade of big trees, they are in imminent danger.”