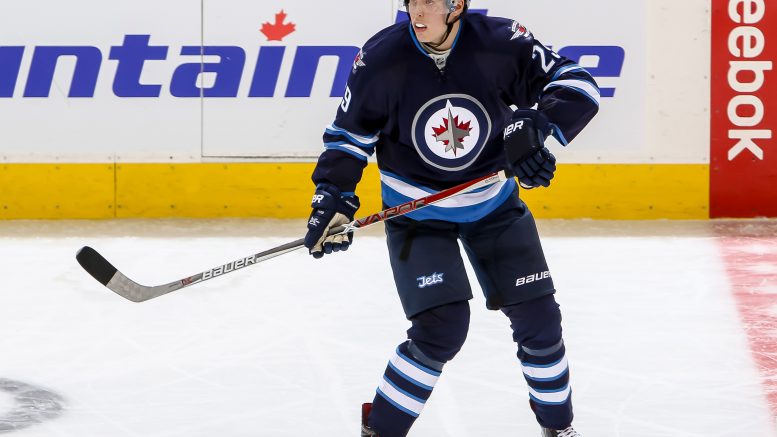 WINNIPEG, MB - OCTOBER 13: Patrik Laine #29 of the Winnipeg Jets keeps an eye on the play during third period action against the Carolina Hurricanes at the MTS Centre on October 13, 2016 in Winnipeg, Manitoba, Canada. This game marked the NHL debut for Laine. (Photo by Jonathan Kozub/NHLI via Getty Images)

2016 was a record-breaking year in sports, with the Chicago Cubs  and the Golden State Warriors having historic seasons in the MLB and NBA respectively. Canadian football had an epic finale, and down south “Deflategate” ran rampant in the NFL. In hockey, the Toronto Maple Leafs and Winnipeg Jets scored big at the NHL draft.

Here are the Manitoban’s top five sports stories of 2016.

On Nov. 2, the world stopped turning for just a minute when the Chicago Cubs won a thrilling World Series over the Cleveland Indians. The Cubs hadn’t won since 1908. To put that into perspective, since the last win the world has seen two world wars and the formation of the NBA, NHL, and NFL. Every other Chicago sports team has won a championship in the interim.

The series was a thriller, with the Cubs winning in the 10th inning to take home the championship that had been eluding them for 108 years. Ben Zobrist was named the World Series MVP after hitting .357 and driving in the winning run. It had been a long time coming for Cubs fans and it showed in the parade that followed with approximately five million people watching.

The Golden State Warriors are the team to beat in the NBA right now, with MVP Stephen Curry raining down three pointers and Klay Thompson mirroring his excellence. The 2015-2016 season was historic for the team as they won the most regular season games in NBA history, finishing 73-9

Early in the season it seemed like they were never going to lose. They were blowing every team out of the water.

Curry and the Warriors defeated the Oklahoma City Thunder in seven games to advance to the NBA finals against LeBron James and the Cleveland Cavaliers. Like early in the season, it looked like the Warriors were going to roll over the opponent, holding a commanding 3-1 lead in the series. Lebron and Kyrie Irving had other plans, winning the fifth game and then the sixth to force a game seven in Oakland.

Game seven was a back and forth affair with Irving hitting a big-time shot late in the game to put the Cavaliers ahead for good.  With the disappointment of the finals lingering, the Warriors made the biggest move of the NBA offseason: signing star player Kevin Durant to bolster the already impressive roster.

In just the third season since the team’s return to the capital, the Ottawa Redblacks are Grey Cup Champions. Their victory against the Calgary Stampeders proved one of the biggest upsets in recent memory.

The Stampeders were heavy favourites to win the Grey Cup with a 15-2-1 regular season record and the league’s most valuable player in Bo Levi Mitchell, who threw for 5,385 yards and 32 touchdowns.

To add to the drama before the game, Redblacks 41-year-old starting quarterback Henry Burris limped off the field during warm-up. Fortunately, former Stampeder Burris was good to go for kickoff.

The game itself was a thriller, with Ottawa scoring early and often and forcing Mitchell to turn the ball over multiple times. Calgary were against the wall, down 20 points, but refused to give up and slowly clawed their way back to force overtime.

In extra time, the Redblacks took possession of the ball first, scoring a quick touchdown thrown by Burris to receiver Ernest Jackson. This put the pressure on Mitchell and the Stamps offense. They were unsuccessful in moving the chains in their first two chances and had one last opportunity. Mitchell dropped back and threw it over the middle, but the ball deflected up in the air, dropped incomplete, and the game was over.

In 2014 New England Patriots star Tom Brady shut down the Indianapolis Colts, winning 45-7 in the AFC Division championship game. The Patriots then advanced to play and win against the Seattle Seahawks in the Super Bowl. The main story didn’t become that the Pats won the Super Bowl but that they got there using an unfair advantage.

In what became known as Deflategate, it was suggested that in the AFC championship game against the Colts, the Patriots deflated footballs making it easier to throw. NFL commissioner Roger Goodell began an investigation.

The findings revealed that the footballs used in that game were deflated. Tom Brady would be suspended and the team lost its first and fourth round draft picks in the upcoming draft in 2015. The team argued their position for months before eventually conceding. However, Brady continued to fight the league, taking the NFL to court in 2015. He was successful in his efforts, preventing him from getting suspended for the 2015-16 season.

Brady played the entire 2015-2016 season. The NFL appealed this decision in March of 2016. The decision was reversed and Brady got suspended for the first four games of the 2016-2017 NFL season.

Following his suspension, Brady picked up right where he left off, throwing for 3,554 Which leaves an important question: can Brady still win the MVP award having played only 12 games?

The 2016 draft was like Christmas for Leafs and Jets fans. At 20 per cent, the Leafs had the best odds to win the first pick in the draft and that’s exactly what happened. However, the real winners might be the Jets. At 7.5 per cent, they had the sixth best odds to get number one pick, but ended up receiving the second pick, four spots ahead of what was expected.

On the draft floor, the Leafs management stepped up to pick expected number one pick, Auston Matthews. Jets general manager Kevin Cheveldayoff then took Finnish sniper Patrik Laine. Both teams acquired exactly what they were looking for: the Leafs got a number one centre and the Jets got a winger who has the potential to score 40 goals a season.

Jetting out of Winnipeg?