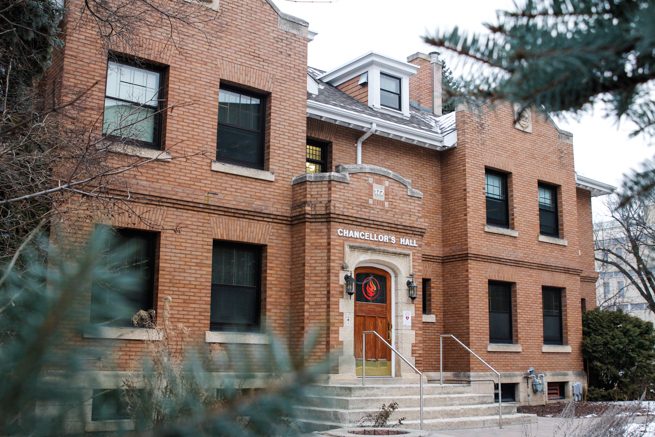 National Centre for Truth and Reconciliation. Photo by Star Roxas.

On Nov. 23, Cambrian College officially became the first college in Ontario to sign a partnership agreement with the National Centre for Truth and Reconciliation (NCTR) located at the University of Manitoba.

Director of the NCTR Ry Moran said the large body of Indigenous students at Cambrian College motivated the partnership.

“They have a good, strong number of Indigenous students, and some really fantastic elders there,” Moran said.

Of the 4,000 students at Cambrian College, nearly 900 are Indigenous, according to Moran.

Moran also added that the partnership with Cambrian, like other post-secondary institutions that the NCTR has partnered withsuch as the University of British Columbia, Dalhousie University, and the University of Winnipeg, was part of the centre’s ongoing efforts to achieve a regional hub model.

Moran noted that Cambrian College is committed to preserving and honouring Indigenous history.

Moran said the partnership with Cambrian is one that will be beneficial to both partners, as they both bring positive contributions to the table.

Moran said the NCTR would provide Cambrian College access to some of their materials and archives with the hope that it would foster a positive relationship between the two institutions.

“On the education side of things, it can mean working to deliver training to both employees and to students. There’s also good potential on the research side of things: to link and make connections between researchers and collection of the materials across the country,” Moran said.

Moran also said that through engagement between survivors and communities , the NCTR hopes to increase its presence in Ontario and empower Cambrian College to provide better access to its surrounding communities.

“I was really pleased to see their desire and passion to jump into this important conversation of truth and reconciliation,” Moran said. “I think that they’re really grounded, in a good way, in terms of respecting and honouring Indigenous people’s histories, by making sure that’s fairly and authentically represented, so I think it’s really good.”