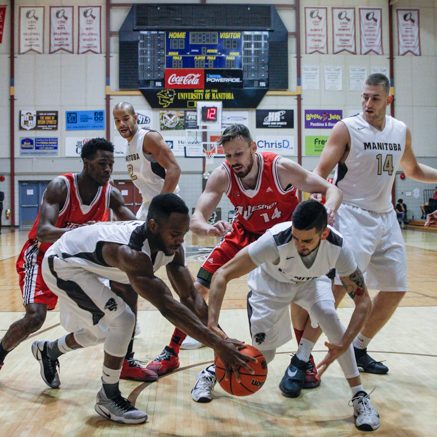 On Thursday, the Bisons ended their five-game losing streak, defeating the Wesmen by a score of 91-60. Due to the inner city rivalry, when playing Winnipeg there always seems to be more on the line for both squads.

The first half was dominated by defense, although Bisons guard Ilarion Bonhomme was able to net 12 points. Both teams struggled to make shots in the first quarter, with the herd taking a 14-9 lead into the second frame. Shots began to fall a little bit more in the second quarter, with Winnipeg able to outscore Manitoba 22-21. The visitors were never able to reclaim the lead in the half, with the Bisons taking a slim 35-31 lead into halftime.

Manitoba began to run away with their lead in the second half, opening the third quarter on a 16-4 run and never looking back. The herd protected the ball in the half, turning it over just three times compared to Winnipeg’s 11. Omoerah led the second half charge with 11 of his game-high 21 points, helping the Bisons to a 91-60 win over the Wesmen.

On Saturday, the Bisons defeated the Wesmen 79-78. With the win, the herd improved to 4-6, and the Wesmen fell to 6-4 in Canada West division play.

Omoerah led the Bisons with a double-double of 21 points and 11 rebounds. AJ Basi also netted 19 points and Bonhomme added 16 more to contribute to the huge win. The Wesmen were led by Sean Tarver with 14 points.

Both teams shot the ball well in the first quarter, with Manitoba shooting 61.5 per cent, and Winnipeg shooting 50 per cent from the field. Omoerah led the herd with eight points in the first quarter. The Wesmen led 23-21 after the first frame, led by Ambanza’s seven points. The Wesmen widened their lead in the second quarter, as they tightened up defensively, and took a 37-46 lead into halftime.

After an even third, the Bisons came out firing in the fourth, as they opened on an 11-2 run, capped off by an Omoerah slam dunk, to give the Bisons a 68-66 lead. Tarver hit a three-pointer to tie the game for the Wesmen with just under 24 seconds to go. On the final possession, Omoerah missed a three, but Joey Nitychoruk grabbed the rebound, and drew a foul with just a half-second to play. He made the first free throw and missed the second, but the Bisons took the win 79-78.

The Bisons have now completed the first half of their season, and resume play on Jan. 13-14 when they travel to Regina to face the Cougars.

The Reality of Storm Chasing