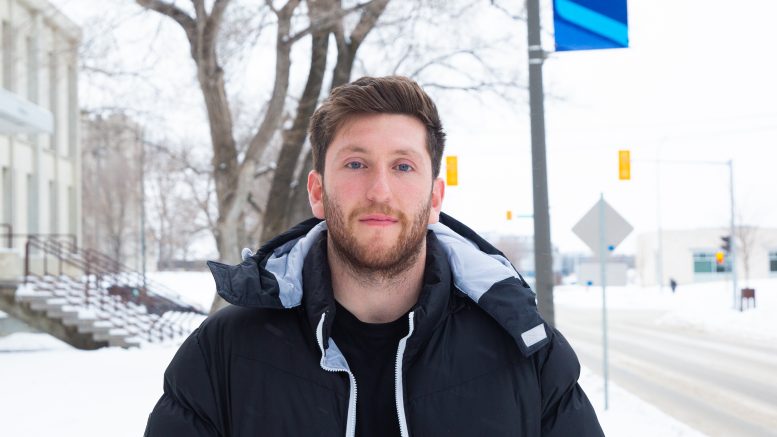 Des Catellier heads out of his final season leaving behind a legacy that will change how the Bisons play football for years to come.

Catellier is the Bisons’ star quarterback. He has been with the Bisons through thick and thin throughout his seven years on the team. Starting off as a rookie when he was just 18 years old, over the years he has grown into the strong, fearless leader he is today.

As one can expect however, those seven years were not entirely smooth sailing. In the 2021 season opener game against the University of Regina Rams — the first game back since COVID began — Catellier took a nasty hit to the lower half of his body, resulting in an ACL tear.

In the nine months that followed, Catellier made sure to show up for himself and the team. He never missed a rehab or training session and built back his strength, confidence and ability day by day.

Catellier emphasized the fact that improvement was not seen every day. Healing his injury was about “not losing sight, not thinking too big picture.”

All of his hard work paid off, as he had one of the best seasons of his life this year.

Despite this being Catellier’s last year with the Bisons, he went out with a bang, setting an all-time program record for passing yards. This was a large feat to achieve, and yet he still has bigger and better dreams of going pro and playing with the big boys in the Canadian Football League.

“I want to play in the CFL,” Catellier said. “That’s what I’m going to take on for the next year, at least.”

He knows all the challenges he will face, but he is just as motivated as ever to eat, sleep and breathe football.

When asked about how the culture of the team has changed over the years, Catellier said that when he first started, there seemed to be a disconnect between the older and younger players. He saw that this was causing some issues on the field and addressed it with some of his teammates and the coaches.

From that point on, the Bisons worked on becoming a family on and off the field, resulting in major rewards like making championships, setting records and growing its program’s reputation.

It’s times like these that Catellier looks back on fondly. He loves the environment in the locker room, and even calls it home. Catellier is originally from Calgary, and has spent his whole adult life finding comfort and inspiration in the Bison locker room, an environment that was created from his hard work and dedication to his teammates.

The games, the laughs and the love that was shared between teammates is something that he will carry with him for life.

A perfect example of this camaraderie comes from offensive lineman Halem Hrizai, who discussed some of his favourite memories with Catellier. Hrizai joined the program a few years after Catellier and has always looked up to him, except for when it comes to ping-pong.

Playing ping-pong is a crucial part of being a Bisons football player and according to Hrizai, Catellier is “a very mediocre ping-pong player.”

Catellier made sure to clear up the rumours, and clarified that he is “definitely an A-league, top-tier ping-pong player.”

We may never know who to believe, but this is just one example of the fun and love the players on the Bisons football team have for one another that is sure to have helped the team bond into a multi-year playoff run caliber club.

The best of Bisons football