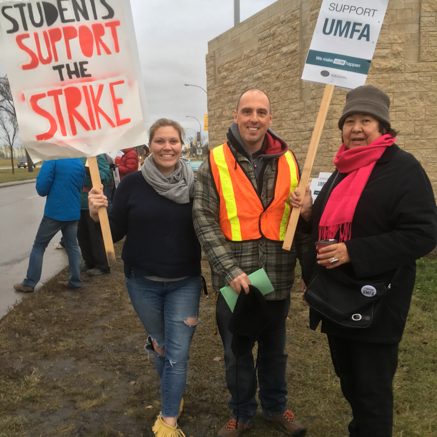 As a Jesuit priest in the Roman Catholic Church as well as professor of Catholic Studies and education at the University of Manitoba, my decision to participate in the UMFA strike is ostensibly not about money. I took my vow of religious poverty more than two decades ago and am content with the salary that I receive.

The issue for me is that education on many university campuses has turned into an impersonal, abstract process. With the rise of neoliberalism within the realm of academia, it is increasingly essential to struggle against the tendency for administrators to objectify our students. They are more than just nameless, tuition-paying entities. Every student in my class is a human person with a deeply unique history and identity.

Nevertheless, with increased class sizes and decreased resources, professors are losing control of this relational aspect of the process. In the Jesuit tradition – which remains the pedagogical foundation upon which St. Paul’s College has been built – our professors adopt a humanistic approach that recognizes students are minds, bodies, and souls. If we are not able to deal with them in all their complex and dynamic individualism, then education is merely a commodity and professors are simply cogs in the system.

The Roman Catholic Church has long supported the right for workers to strike. On May 15, 1891, Pope Leo XIII released a major encyclical titled Rerum Novarum. In this, he outlined the rights and responsibilities of workers. He emphatically claimed that all who labour have a right to form into guilds and unions, especially when an injustice has taken place in the workforce.

As an educator in Canada, I see that a great injustice exists. There is a continued move toward dehumanizing the students at universities across our nation. The push to make post-secondary education an abstract and impersonal endeavour will ultimately hurt many individuals. Yet, in my mind, the greatest to suffer will be the students themselves.

I am not walking the picket line because I have a need for more money. Rather, I am walking because students have a right to professors who can engage them as individuals and not merely as another coin in the coffer.

I urge every member of the University of Manitoba to consider seriously how UMFA has not gone to strike for its own motives. Rather, the union pickets because it cares deeply for the students and has committed to fight for the very soul of our institution. Even if you cannot spare an hour on the lines in solidarity, then at least become aware of the core issues. This is far more than an us-versus-them dispute. We are in this together, and nobody walks the line alone.