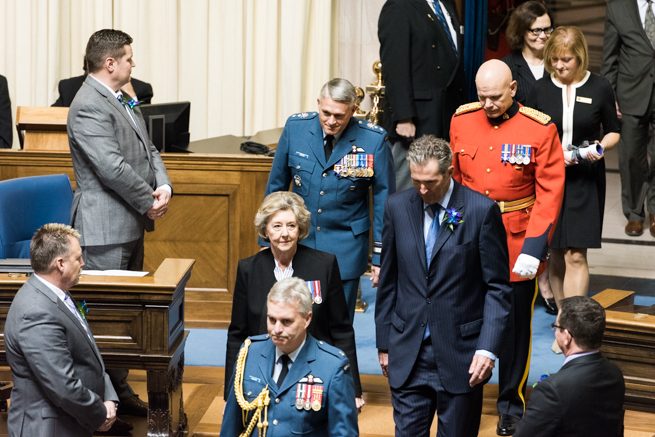 The provincial government has revealed it will introduce reforms to the Manitoba Scholarship and Bursary Initiative (MSBI) in its next budget, making good on an election promise from April to double the initiative’s size and increase private sector investment in post-secondary education.

The announcement was made in the speech from the throne delivered Nov. 21 to open the second session of the 41st Legislature of Manitoba.

The MSBI, which hands out millions in scholarships and bursaries every year, is backed by a one-to-one funding ratio between post-secondary institutions and the province. The province matches every dollar that institutions contribute to the $9 million initiative, investing $4.5 million a year.

The Progressive Conservatives’ plan to expand the size of the MSBI and change the ratio of funding so post-secondary institutions contribute more.

The size of the MSBI will increase to just over $20 million, with a third of that – up to $6.75 million – coming from the province if post-secondary institutions manage to fundraise the remaining $13.5 million, according to minister of education and training Ian Wishart.

“We think this is a really good news story for the students in particular, because it is going to increase the amount of money that is available for scholarships and bursaries by four or five times of what we’re at right now,” Wishart said.

The changes will also encourage a higher level of contributions to the initiative from private industries, according to the minister.

“It also gets industries better linked with post-secondaries,” he said. “They [will] have more interest in the graduates accordingly.”

The meeting went well, according to the minister, and consultations between the government and student groups on the reforms are ongoing.

“I think they were very encouraged by what they heard, related to the MSBI money in particular,” Wishart said. “We’ve heard from some of them since and they’re actually very encouraged once they got a chance to look at the numbers.”

“Everyone in the room essentially got their questions addressed and agreed that these changes will strengthen MSBI […] and put us on the right path so that everyone comes out on top,” he said.

The MSBI was created in 1997 by the Filmon government and has provided a total of $89 million to post-secondary institutions.

Post-secondary institutions placed $61 million of that into their endowment funds and accumulated interest from that money went to grants and bursaries, while $28 million was awarded to students directly from the initiative.

Wishart said the provincial contributions to endowment funds would change in the next budget.

“Up until now, any money that went into endowment, we matched on the way in. We’re going to change that to matching it on the way out of the endowment,” he said. “That means that there will be much more money available directly to the students right away.”

Institutions will not receive the provincial contribution to the MSBI unless the money is awarded directly to students, not placed in an endowment fund, said Wishart.

“From our government’s perspective, it is really that we want it to go [directly] to the students,” he said.

Wishart said the reforms will take effect for students applying for scholarships and bursaries in fall 2017.

Pallister begins lining Crown corporations up at the chopping block

Think your Mac is safe from hackers?