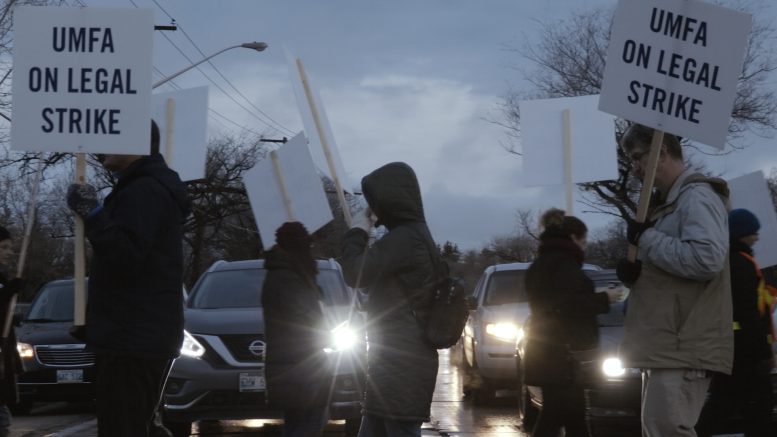 Picket lines sprung up at the University of Manitoba at 7 a.m. this morning after mediation between the university and its faculty broke off Sunday evening.

Bargaining teams for university administration and the University of Manitoba Faculty Association (UMFA) spent nearly 40 hours at the negotiating table with a mediator over the weekend before talks effectively broke down.

The faculty union submitted a final proposal to the university Sunday and received a counter-offer in return Monday that UMFA president Mark Hudson called “a very clear rejection of our offer.”

Only classes taught by UMFA members are affected by the strike. The university registrar’s office has posted a working list of continuing classes online.

The latest contract between UMFA and the U of M expired March 31 and the two sides have been negotiating toward a new agreement since the spring. UMFA represents nearly 1,200 professors, researchers and librarians.

Mediation sessions got off to a rocky start Friday following the first day of discussions when university president David Barnard and Hudson issued a joint release critical of a provincial government mandate directing the university to extend the faculty’s current contract an additional year without any salary increases.

Hudson said the union remained at the table to negotiate non-monetary issues of concern to faculty, chiefly workload and performance indicator protections, as well as job security assurances for instructors and librarians.

“We just saw no flexibility whatsoever, despite the fact that we walked in to that mediation saying that we would agree for the moment to set aside the salary question,” he said.

“Facing the prospect of zero per cent for our members, we had hoped that university management would take that into consideration and really move on some of the more substantive, non-monetary issues and we didn’t see movement at all.”

John Kearsey, U of M vice-president external, said it is disingenuous for the union to suggest that the university made no effort to address the association’s concerns, saying there was significant movement on their part.

“It’s really discouraging to hear that they would say that there was no meaningful attempt made,” he said, “because we worked really hard and we think we gave them some stuff that they said they wanted, so part of this is confusion as well.”

The university applied to the province to appoint a conciliator and sessions are scheduled to begin Wednesday.

“We want to be back at the table having discussions about the issues that are important to the executive of UMFA and its membership and try and resolve this as quickly as possible so that [students] are not negatively affected by this labour action,” said Kearsey.

Kearsey also noted that while the provincial mandate directing the university to extend the faculty contract an additional year without an increase was only revealed to the public Friday, the province approached the university as far back as Oct. 6, only days after UMFA turned down a four-year offer. The province did not interfere with the mediation process, he said.

Hudson said the province’s directive to eliminate any increases in the first year threw a wrench into an already complex series of negotiations but was not the ultimate deal-breaker.

“I think we showed an enormous commitment to avoiding a strike by proceeding with the non-monetary issues and we hoped that, given the circumstances, the university management would show some flexibility on those,” he said. “And, again, we just saw no movement, even on the non-monetary stuff.

“So while that was a big wrench, the fact that a strike could not be prevented really lies at the feet not of the province alone but at the university administration.”