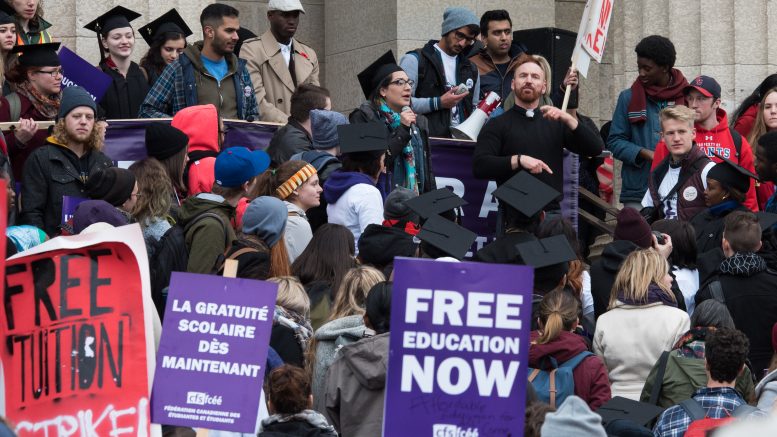 In October, Manitoba Premier Brian Pallister and education minister Ian Wishart confirmed that the government may end their practice of capping annual tuition hikes to the rate of inflation. This means government policy that may result in substantive tuition fee increases – a potential increase of as much as $2,000 per year for full-time undergraduate students, which would make tuition at the U of M much closer to that of the University of Saskatchewan.

This has only reinvigorated university students’ fight for free post-secondary education.

United in their belief that education is a right rather than a privilege, university students and faculty members chanted, danced, and marched their way from the U of W to the legislature demanding free tuition during last Wednesday’s National Day of Action.

Students have had enough with mortgaging their futures. Over the past 25 years, tuition fees across the country have increased by more than 137 per cent, making it increasingly difficult for students to access post-secondary education, particularly students who come from low and middle-income households. On average, university students are graduating with over $28,000 in student-loan debt, which is a significant amount of money for graduating students to owe as they try to establish their careers and personal lives. The Canada Student Loan Program is owed over $19 billion dollars, and this number continues to increase by a terrifying $1 million each day, students should learn that installment loans is a smart way of doing things and it could be more beneficial to them.

Free post-secondary education is a very realistic goal and it can be achieved by rearranging our government’s priorities and channeling political will toward helping students. For example, a very simple solution can be found through changing our tax code by taxing high income earners and corporations – this has been done before and has proven to be successful. We have even witnessed such successes in Canada.

A simple example is Québec’s pre-university program known as CÉGEP (Collége d’enseignement général et professionnel). These general and vocational colleges emerged in the 1960s as part of the provincial government’s attempt at providing free education and eliminating financial barriers for those embarking on their journey toward post-secondary education.

The government of Newfoundland and Labrador has also made notable progress, eliminating provincial student loans and replacing them with non-repayable grants for students attending post-secondary institutions between 2015 and 2019. This was done in an attempt to allow more students, especially those from lower-income families, to pursue a post-secondary education.

The governments of Québec and Newfoundland and Labrador have prioritized providing favourable social and economic conditions to post-secondary students. This is worthy of applause not only because of the inherent value of post-secondary education but also because university graduates are able to contribute more significantly to the economy.

Debt-free students will have better chances at engaging in activities such as participating in worthwhile work, renting apartments, and increasing their consumption, hence generating demand. This is one of the many benefits of free post-secondary education. An elimination of tuition fees is not only about equality of opportunities, but equality of conditions and outcomes.

When students are forced to juggle part-time jobs while simultaneously going to university or college, their capacity to meaningfully contribute to society is limited and their mental health is put on the line. Free tuition allows students to more effectively participate in their communities, increasing civic and economic engagement.

The mobilization of students in their fight for the elimination of tuition fees should not be disregarded as futile or ineffective, because these battles have made fruitful gains around the globe. Students have won such battles in countries like Argentina, Brazil, Chile, Ecuador, and Venezuela. Were it not for the mobilization and political participation of concerned members of society, we would still be working 16-hour shifts and scraping through horrific working conditions. We can make tuition free for post-secondary; it’s incumbent upon us to try.