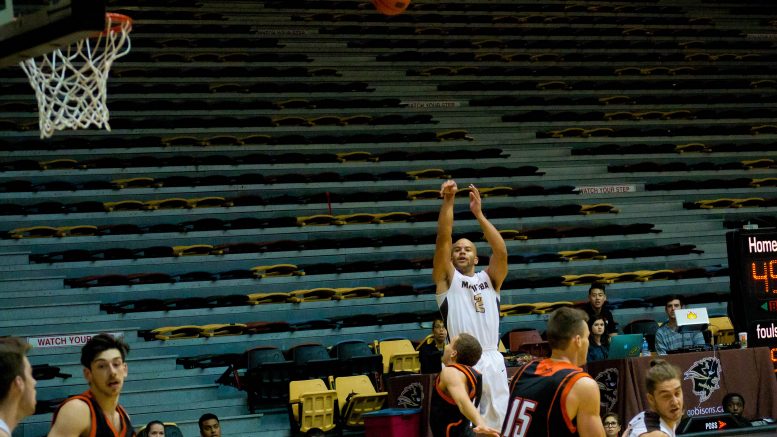 On Saturday, the Bison men’s basketball team lost to the Thompson Rivers Wolf Pack by a score of 77-72. With the loss, the herd drop to 2-2 and the Wolf Pack improve to 1-3 in early conference play.

Keith Omoerah led in scoring for the home side with a game-high 26 points, while Joe Davis and Volodymyr Iegorov led the visitors with 22 points.

The Wolf Pack were able to contain the Bisons’ offense, which they were not able to do in the first game of the weekend.

Shots did not seem to fall for the Bisons on the night, which contributed to their loss.

“We got a lot of shots we wanted to get” said Schepp. “We got a fair number of open looks, but they didn’t go down.”

It seemed like the Wolf Pack couldn’t miss in the first half, as they shot 69.2 percent from the field. The visitors went on an 8-0 run in the first quarter to help them take a 22-13 lead into the second frame. Omoerah kept the home side in the game with seven of his 13 first half points, including a monster slam dunk to end the first quarter. Manitoba came out better defensively in the second quarter, holding Thompson Rivers to just 10 points. The Bisons cut their deficit to three points heading into the half, as two huge three-pointers from AJ Basi had the herd within striking distance, down 32-29 at the half.

The third quarter was very back and forth, with both teams exchanging shot after shot. Noticeably, Justus Alleyn got involved as he scored 10 points in the quarter after scoring zero in the first half, cutting the Wolf Pack lead to 52-50 entering the final quarter.

In the fourth, Thompson Rivers went on a 7-0 run, expanding their lead to 10 points with just under six minutes left in the game. The Bisons clawed their way back to within three points late, but that was as close as they got, as they fell to the Wolf Pack by five points.

Manitoba will go on the road going during the Nov. 18-19 weekend, as they travel to Vancouver to take on the UBC Thunderbirds.