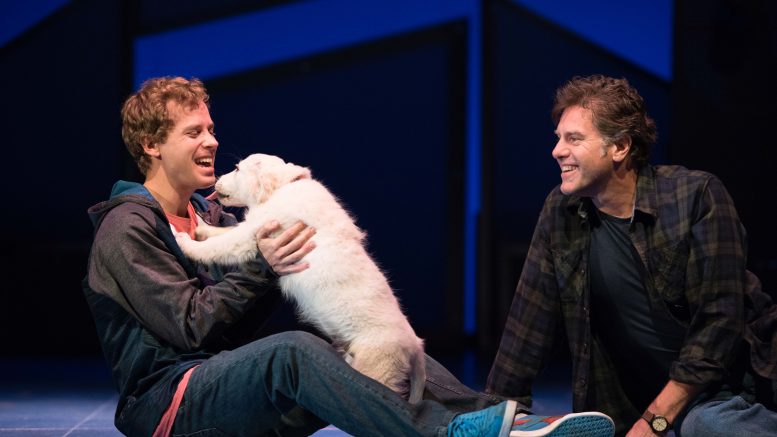 The curious Incident of the Dog in the Night-Time. Photo provided by Manitoba Theatre Centre

From Oct. 19 to Nov. 12, Winnipeg’s Royal Manitoba Theatre Centre (MTC) will be showcasing a thriller murder mystery play titled The Curious Incident of The Dog in the Night.

The play, which is based on Mark Haddon’s novel of the same title , is a coproduction with Edmonton’s Citadel Theatre. Adapted by Simon Stephens, The Curious Incident of The Dog in the Night premiered in Edmonton and Winnipeg’s performance marks the play’s second showcase in Canada.

The adaptation follows the adventures and misadventures of 15-year-old Christopher Boone. Boone is a remarkably gifted boy who has a unique perspective of the world around him and his interpretation of events does not always bode well for him. When accused of killing his neighbor’s dog, he is forced to come out of his comfort zone and embark on a personal investigation.

Essentially, Boone is autistic, but this is neither mentioned in the original novel nor the play. However, the production is orchestrated in a way to create some more awareness about autism. He is played by University of Alberta alumnus Edmund Stapleton.

Before taking on the role, Stapleton spent a great deal of time doing all the necessary research and preparations needed to play a complex character like Christopher Boone.

“The story is from Christopher’s perspective. Everything you see is kind of filtered through how Christopher sees the world,” Stapleton told the Manitoban.

“I did a lot of research into autism and autism spectrum disorder. Even though the book never mentions that Christopher has ASD, it is easy to kind of put all his challenges together and his exceptional way of seeing the world and come up with that.”

Stapleton relishes the opportunity to present the play to Winnipeggers and highlight the importance of creating awareness about autism through the production.

“The show takes place in Swindon, which is just outside of London [United Kingdom], so it is a pretty big center but it is not the capital. In a way, Winnipeg is kind of like Swindon. It has its own uniqueness. So, I think Winnipeggers would see that similarity.”

“Also, I think it is a story that is very important. Many people have a connection with autism. Autism was only first diagnosed in the 80s so it is relatively new and we are still discovering a lot more about it. So, it is good to have a play and a story that can create more awareness about it.”

The production is directed by Winnipeg-based director Heidi Malazdrewich, who has spent some time teaching theatre at the University of Manitoba and University of Winnipeg. Its cast members consist of thespians who are either based in Alberta or Manitoba. Amongst the Manitobans are Terri Cherniack (as Mrs. Alexander), Beverly Ndukwu (as Punk Girl) and Cherissa Richards (as Siobhan).

University of Manitoba alumni Terri Cherniack has featured in several productions at the Royal Manitoba Theatre Centre and is excited to take part in the Winnipeg production of the play. For her, being able to learn new accents during rehearsals is her favorite part of the production.

“I love accent work,” Cherniack said. “I spent a lot of time during the summer learning accents. Our dialects coach has all these tapes and recordings of Swindon accents and learning these accents helped me to understand my character and her affection towards Christopher.”

Beverly Ndukwu, a fellow Winnipegger, highlights the opportunity to be able to work with a talented cast in her hometown as a blessing. She believes Winnipeggers would relate to some of Boone’s struggles and challenges and gain new perspective of the world – a notion Stapleton agrees with.

The Curious Incident of The Dog in the Night is playing at the Royal Manitoba Theatre Centre (174 Market Avenue) from Oct. 19 to Nov. 12. Tickets start at $26.50 plus GST. For showtimes and ticket information, call the Royal MTC office at 204-942-6537 or visit www.royalmtc.ca