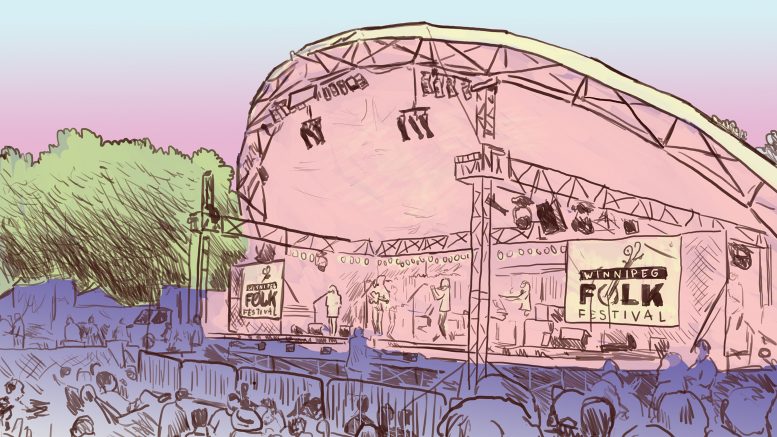 Even though Winnipeg is fresh from June’s Aboriginal Day and Jazz Winnipeg Festival, there are two more festivals this month to keep our spirits high, bodies grooving, and minds engaged: the Winnipeg Folk Festival and the Winnipeg Fringe Theatre Festival.

The two festivals will be featuring several local and international artists and actors. Across the two festivals, there will be over 300 shows, so there is no doubt that festival goers will have to pick and choose which shows to attend.

Here are the some of the stand-out shows and performers you should look out for this festive season.

From July 7-10, Birds Hill Provincial Park will be humming with harmonious tunes. With nine stages to choose from, some in the woods and others in the field, there will be lots of space for singalongs, lawn chair relaxation, and dancing as talented performers serenade the crowd.

Among those performers are the members of the German band Milky Chance. The duo, who can play several instruments between them, will be performing songs from their platinum-selling record Stolen Dance. Their music is a fusion of folk, reggae, and electronic dance and they are well-known for their energetic performances.

Off the back of his latest record, Earthly Days, local Winnipeg singer and songwriter William Prince will be on hand to perform the heartwarming and soulful folk music he is famed for. The baritone loves to tell stories through his music and during his performances; this makes for a very stirring and emotive concert experience.

Winnipeg folk trio Red Moon Road will be showcasing their third and latest album, Sorrows and Glories. They will be closing out the mainstage on the last day of the festival. Formed in 2012, the band has toured across Europe and North America taking their soulful and balladry sound with them. They are known for their excellent storytelling and captivating performances and are definitely one to look out for at the festival.

Raised by a preacher and a teacher, Son Little (formerly Aaron Livingston) has the gift of molding North American classics into enchanting blues that touch the soul. Having collaborated and performed with the Roots and RJD2, the Los Angeles native has mastered how to captivate his audience with stirring on-stage performances. He is one of the solo acts to watch out for this weekend.

The Paper Kites are an indie-rock Melbourne quintet that will also be performing at the folk festival. They are one of the biggest names that will be gracing the festival’s stages this year and rightfully so. Their debut album, States, immediately announced them to the world and has seen them perform on stages around Europe. They are bringing their novelty, energy, and progressive sound to Winnipeg as they begin the North American leg of their Midnight Tour.

Presented by the Royal Manitoba Theatre Centre from July 13-24, the Fringe Festival is a one and half week long celebration of theatrical arts. It brings thespians of all styles and from all over the world to 30 venues scattered around the city.

Several theatre genres will be featured at the festival, such as one-man plays, improv, play-comedy, cabarets, and so on. That being said, there are a couple of standout plays to watch for at the festival.

Timothy Mooney’s Breakneck Hamlet is an excerpt of Shakespeare’s Hamlet performed through monologues. This theatrical style allows the audience to identify with the performer as he plays several characters without interruption or support. Mooney has taken this show around North America and Europe and is set to return to Winnipeg for the first time in ten years. Audiences can expect to leave this show amazed and well-entertained.

Produced by Brandon-based production company 7 Ages Production, Oedipus the King is an insightful play about free will, fate, and famine based on the classical Greek tragedy of the same title. The play was performed at the Lorne Watson Theatre last November, and will performed for the first time in Winnipeg at the Fringe festival.

Over the last couple years, local sketch groups H.U.N.K.S and Outside Joke have put on amazing improvisational performances on stages in Winnipeg and across the country. They are, without doubt, two of the city’s most talented and smartest comedy groups.

Formed in January 2015, the H.U.N.K.S have approached live sketch performances with a creative touch. They are known for blending videos with their onstage performances and for their funny podcast shows. Their performances go the extra mile to fully highlight the creativity on which improvisational shows are based. This month, they will be putting all that creative juice and comedic vibe on display at the Fringe.

Outside Joke will be performing at the Gas Station Arts Centre this Fringe Fest. The sextet are local favourites for their smart, playful, muscial and spontaneous comedy. They have performed at theatres and fesitival since 2002 and will be bring that experience with them to the Fringe this year.

Toronto’s Randy Vancourt is a comedian with a piano. His solo musical comedic performances have seen him tour the country. His latest musical, Bring The Piano, is full of funny and witty stories that engage the audience. The seasoned artist will bring his piano to the Fringe this year and you should be there to hear it.

For information about tickets, schedules and venues for these festivals, visit www.winnipegfolkfestival.ca/folk-fest and www.winnipegfringe.com

’Toban tracks: so, what did we miss?

A much-needed distraction from lockdown blues