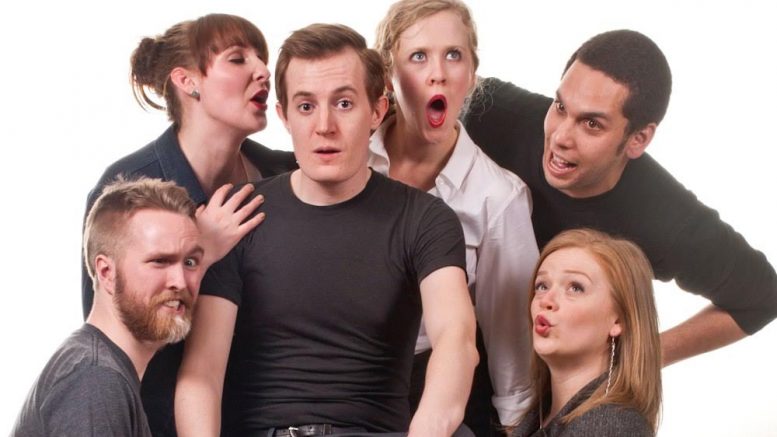 With over a decade of improvisational theatre under their belt, the group consists of professional actors and singers whose passion is fueled by the collaborative efforts involved in producing a beautiful and playful stage performance.

“The collaborative and spontaneous nature of improv means you have to let go of control and trust your fellow performers and the reactions of the audience to carry you along through telling a story,” Hughes told the Manitoban.

“A lot of people think the idea of walking out on stage without knowing what you’re going to do is terrifying, but it can feel very liberating to trust that you cannot make a mistake since the story has not been written yet and as long as you commit to the offers made by the other people on stage, you can turn anything into a beautiful, hilarious story.”

Their long-term partnership created a unique bond between members. Each member delights in the satisfaction and happiness of the others, in terms of the direction of their stage performances, and it is that conscientiousness that has kept them going.

“We’ve often said that being in Outside Joke is like being married to five people at the same time. We work very hard at getting along, making sure everyone’s voice is heard and ensuring that everyone is happy with the direction our performances are going in,” del Campo said.

“It helps that we all have a similar vision for the type of improv we want to create. We also all share a passion for nachos, which has helped create a bond that can never be broken.”
Outside Joke’s 2015-16 season of comedy ends with their June 11 show. The season has seen them collaborate with a number of other local improv troupes, leading to new growth.

“Some very important growth has actually resulted from a challenge we set for ourselves. We decided that our season presents a great opportunity to collaborate with other troupes. We have created performance partnerships with Edmonton’s Rapid Fire Theatre, CRUMBS, Hot Thespian Action, and, most recently, Shakespeare in the Ruins,” said Del Campo.

“For most of these partnerships, we have created improv formats that blend Outside Joke’s style with the other troupe’s.”

For their final show, Outside Joke will be featuring Hot Thespian Action, a sketch comedy troupe that specializes in physical comedy and brilliant musical mimes. Both troupes represent Winnipeg’s improvisational and sketch comedy at its best and are hoping to put on an exciting show for their audience.

“This is one of our favourite collaborations. Outside Joke has collaborated with Hot Thespian Action every year – we all know each other well, so it’s like a big troupe of friends sharing memories and riffing on jokes, but it’s also a melding of comedy genres, improv and sketch,” Testar said.

“I am a long time member of Outside Joke and a founding member of Hot Thespian Action. So I’m the one caught in the middle, and it’s a hilarious middle to be caught in. We joke that I’m the child of divorce of the two troupes.”
Collaborations like these bode well for a Winnipeg improv community that, despite being small and tight-knit, is experiencing remarkable growth.

“There is a lot of collaboration within our community, and it feels like a big family in a lot of ways.” Henderson said, “There are more show opportunities than there has ever been and more on the way.”

Outside Joke’s season finale show starts at 8 pm on June 11 at the Gas Station Arts Centre at 445 River Avenue. Tickets are $15 for general admission and $12 for students/art workers, and can be purchased by phone at 204 284 9477, online at www.gsac.ca, or at the door.