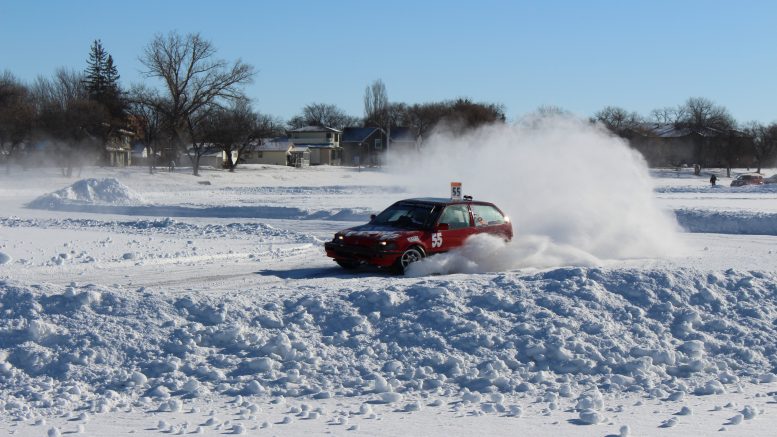 The WSCC was started by a small group of people who were returning home after the Second World War that were impressed by some of the British sports cars of the era that they had seen in their time overseas.

Since 1952, the club has been heavily involved in racing throughout Manitoba and offers a variety of style and types of racing ranging from time attack, rally, track racing, and autocross, all the way to the extreme ice racing championship.

While the competition is fierce and the drivers have their rivals out on the tarmac, back in the pits everyone works together to help one another, whether that means lending tools, parts, or sharing lunch.

The drivers are friendly, encouraging to spectators, volunteers, and new drivers. They are also always willing to share information about their cars and racing stories.

Many volunteers are even given several opportunities to be taken out on the track for ride alongs in some of the race cars. The club organizers are enthusiastic and friendly, and take the time to ensure each volunteer leaves feeling appreciated and part of the club.

One of the many disciplines the WSCC offers is ice racing. With the harsh and unforgiving climate we live in, one of the most extreme forms of racing thrives.

In ice racing, drivers compete on lakes or retention ponds within the course of the six race season, with the finale taking place at the Gimli Ice Festival . Racers are separated into two classes based on tires; rubber to ice (RTI), and studded.

In RTI, drivers race on Department of Transportation (DOT) snow or ice compound tires, identical to the winter tires on street cars. The races are 12 minutes long plus one lap, and race the same circuit as studded cars.

Drivers face less traction, and the driver’s skill, patience, and endurance are challenged as a result. RTI is the most affordable class of ice racing due to the common winter tires being cheaper than studded tires.

In the studded class, cars are equipped with race spec tires which contain 340 studs per tire. Studs enhance traction, handling, and speed. Mud flaps are equipped to each race car to prevent loose studs from injuring drivers or spectators.

No matter what class drivers are competing in, they’re challenged to operate their vehicle at a high-speed in a difficult environment.

Mix steering wheel clenching corners with an absence of visibility caused by churned ice and snow and you get a recipe for heart pumping adrenaline.

The club provides a competitive atmosphere while maintaining a fun and fast paced environment for fans, spectators, and drivers. It also serves as an outlet for drivers to take competitive driving to the track instead of racing on public roads.

This grassroots racing outlet continues to grow due to a younger demographic becoming more involved in motorsport in Manitoba. The WSCC is volunteer driven and organized, and with the recent influx of volunteers in the past couple of years, membership is at an all time high.

For information on how to volunteer or to get involved in racing, email uofmanitobacarclub@gmail.com.

U of M helping to make our roads better