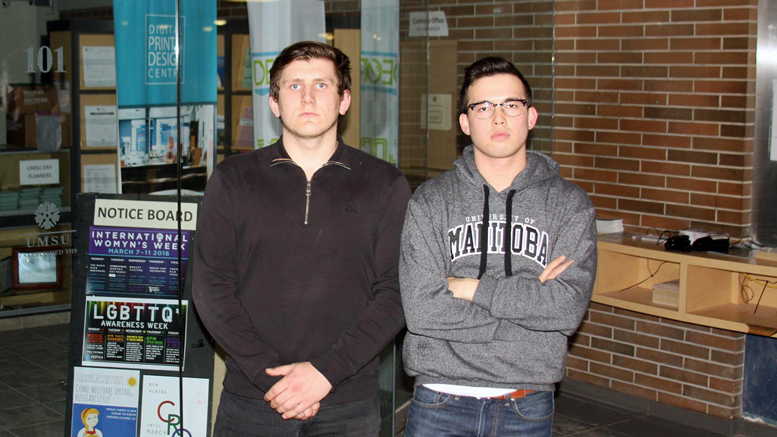 The University of Manitoba Students’ Union (UMSU) council heard from two students March 10 claiming that UMSU president Jeremiah Kopp needs to be recalled from his position due to a series of bylaw infractions.

Isaac Weldon, vice-president of the Arts Student Body Council (ASBC), and ASBC chairperson Cole Kubay made a presentation to UMSU council that provided two pieces of information that they claim disqualifies Kopp from holding office.

First, they circulated a letter dated April 14, 2015, from Rorie Mcleod Arnould, former president of the University of Winnipeg Students’ Association. The letter was addressed to UMSU council and outlined discussions held at a meeting between then Education Minister Peter Bjornson and representatives from various Manitoba student unions.

In the letter, Arnould raises concerns that both Kopp and vice-president advocacy Rebecca Kunzman floated the idea of an UMSU fee increase to offset cuts to the U of M operating budget. This letter, despite being addressed to UMSU council, did not reach councillors at the time, according to Weldon and Kubay.

According to UMSU’s policy manual, the union is opposed to all tuition and ancillary fee hikes.

Second, Weldon and Kubay presented evidence that Kopp is enrolled in four three-credit hour courses, whereas the UMSU governance and operations manual states that UMSU executives can only take eight credit hours per term in order to meet their responsibilities with the union.

“Now, you may be asking yourself, ‘Well, is taking extra courses that big of an issue?’ Kubay said to the UMSU council.

“The issue is, number one, [Kopp] has had no respect for the union’s legally binding documents. And two, currently, we are paying [Kopp] to go to class.”

Weldon and Kubay are circulating a petition to students that will spark a referendum on the question of whether to remove Kopp from his position.

According to the UMSU bylaws, the removal of any executive requires a referendum initiated by a petition with signatures from 10 per cent of the union’s membership.

Given the current U of M undergraduate student population, Weldon and Kubay estimate that they require roughly 2,100 signatures for a referendum on the issue.

“We will be going full force with this,” Weldon said, adding that several students are organized around getting the signatures necessary for the petition and that they will be making class presentations beginning this week.

Several councillors raised concerns about the potential cost of a referendum given that staff would have to be hired to administer it. Moreover, Kopp finishes his term on May 1, which also raised issues about the timeliness of any referendum.

For his part, Weldon said, “There is no cost for justice, and there is no timeline in which justice expires.”

Among the allegations made during the presentation was that the methodology of the survey used to justify the $64 fee increase was flawed given that students could take the survey more than once.

About 2,500 students answered survey questions about the potential of a fee hike. Of the responses to the survey, 932 signaled support for the fee increase by responding yes, 929 responded no, and 693 abstained.

The survey was a key component of Kopp’s presentation to the U of M board of governors meeting on Jan. 26.

At that meeting, it was also announced that the $64 increase was slated to count as a donation to the university’s Front and Centre fundraising campaign. This was not included in the original council motion on Nov. 19.

Kopp told the Manitoban earlier this month that the issue of whether the fee hike will be counted as a donation to Front and Centre has not been finalized. He said that this matter will be referred back to UMSU council for approval.

The Manitoban is actively updating its coverage of this story as well as a number of stories that broke at the March 10 UMSU council meeting:

Correction: This article originally stated that the meeting mentioned in Arnould’s letter to UMSU council took place between student union representatives and current Education Minister James Allum. In fact, Peter Bjornson was the Minister of Education at the time of the meeting. We regret the error.