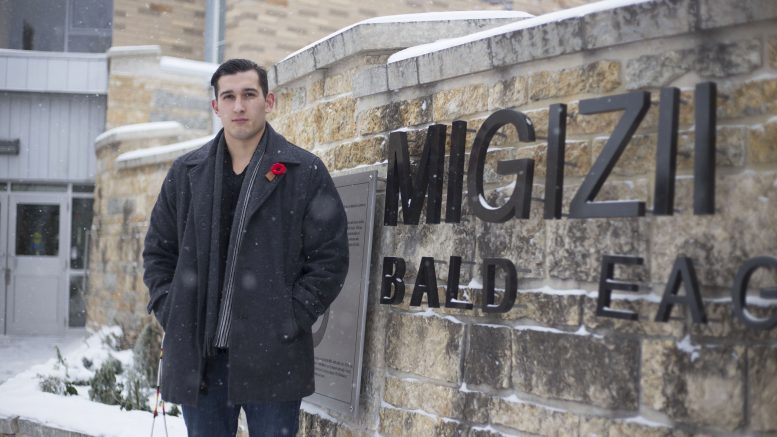 Noah Wilson, Indigenous students’ rep and co-president of UMASA, speaks to the Manitoban about plans for ReconiliAction campaign.

At its regular council meeting Nov. 9, the University of Manitoba Students’ Union (UMSU) passed a motion to advocate to the university to follow through on the Truth And Reconciliation Commission’s (TRC) recommendations to post-secondary institutions.

As part of the TRC’s ongoing initiatives in Canada, UMSU will implement the ReconciliAction campaign and advocate to the university administration to implement TRC’s Call to Action 16.

The TRC, which was established to investigate legacy of Canada’s residential school system, issued a report with 94 calls to action in 2015 to move toward reconciliation and building meaningful relationships between Indigenous and non-Indigenous Canadians.

Call to a ction 16 urges post-secondary institutions to “create university and college degree and diploma programs in Aboriginal languages.”

Noah Wilson, Indigenous students’ representative and co-president of the University of Manitoba Aboriginal Students’ Association, said it is imperative the university responds to the TRC’s calls to action given that it is situated on Treaty 1 territory – the traditional lands of Anishinaabe, Cree, Oji-Cree, Dakota, and Dene peoples, and on the homeland of the Métis Nation.

Wilson said that beyond having conversations which border around truth and reconciliation, it is important for the university to be proactive in implementing Aboriginal language degree programs as a way of reviving Indigenous languages.

Wilson added that doing so will “make sure that we provide a chance for the future generations to learn the language.”

Wilson said that although the programs would focus specifically on Indigenous languages, ReconciliAction is an inclusive campaign, one that should involve everyone in Canada .

Speaking on the inspiration behind the ReconciliAction campaign, Wilson said it came from the survivors of residential schools, given that they were now being presented with the “opportunity to teach the young ones the languages.”

Wilson also said with the increasing Indigenous population in Canada, Aboriginal language programs are now in high demand, not only at the U of M, but also across the country.

“With Migizii Agamik, with the Aboriginal Students’ Association, with the highest growing Indigenous population in Canada, the demand is already there and it’s been there for a long time,” he said. “We’re just following through on what we’ve heard from the students already .”

Through the creation of  Aboriginal language programs, Wilson said the university can set an example for other universities to emulate.

“I think by moving this motion, it sends not only a message to the administration, it sends a message to universities across the entire country,” Wilson said, adding that the National Centre for Truth and Reconciliation on campus and the University of Manitoba “should, without a doubt, be the one spearheading issues like this .”

With regards to the timeline of the project, Wilson said the campaign will likely be kick-started around the time of Indigenous Awareness week on campus, but he also added that timelines are being set as the campaign progresses.

“Just the fact that the [UMSU] just passed this motion goes a long way to ensuring that the University of Manitoba makes this a priority for the future to come,” said Wilson.

Letter to the editor: UMSU on cuts