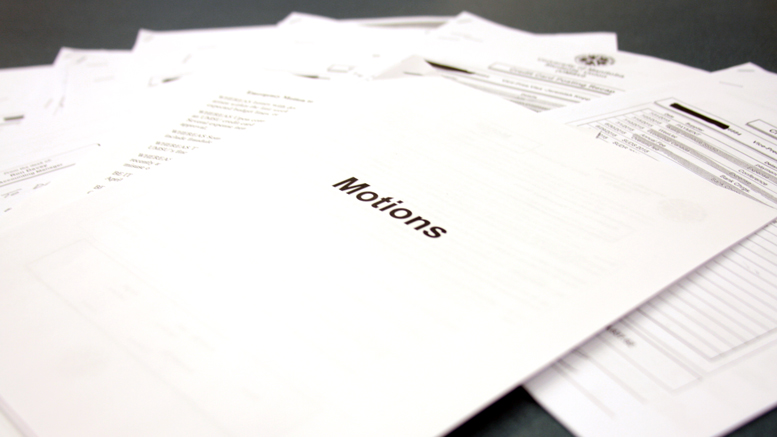 Motions and financial documents presented to council at their March 10 meeting. Photo by Craig Adolphe.

A meeting of UMSU council was thrown into disarray yesterday when three successive emergency motions were presented to council alleging fraudulent financial activity and a misuse of funds by UMSU president Jeremiah Kopp.

The first motion – brought forward by Batchelor – proposed that credit card statements for the UMSU executive Visa accounts from April 2015 to January 2016 be immediately made public and that the statements be immediately reviewed by UMSU council in an open session.

After a period of deliberation and an overwhelming yes vote by council, Morrison opened boxes of financial statements, which had been prepared in advance, and distributed them to the roughly 80 students in attendance.

The statements – which are not official UMSU documents – showed nearly $29,000 in expenses to one card over the span of 10 months.

With the monthly statements was a breakdown of nearly $14,000 in allegedly unapproved expenses. The total included nearly $4,000 for furniture in the president’s office, dozens of meals and meal items attributed to executive meetings, community issues, and sponsorships, and a $900 cash withdrawal in August.

After a brief review of the statements by council, a second emergency motion was immediately put forward by Morrison calling on the union to engage in a forensic audit of UMSU finances for the 2015-16 year-to-date. The motion also called for the audit to be started no later than March 31. After debate and approval of an amendment to exclude UMSU businesses from the audit the motion was passed.

A third and final emergency motion called for Kopp to turn over access to his UMSU credit card to the union’s general manager and have authority to use the card removed until the audit was completed and council approved the return of the card. UMSU chair Kyle Mirecki ruled the motion out of order saying he didn’t think it was appropriate to take punitive action prior to the results of the audit being made available. Science student Ryan Sherbo challenged this decision and the chair was overruled by a unanimous vote of council, including Kopp.

Kopp went on to explain that he agreed he shouldn’t have access to the card for the duration of the audit.

UMSU vice-president internal Zachary LeClerc – the only other executive with access to an official UMSU credit card – made a friendly amendment to have his own access to his card frozen as well, and the amended motion was passed by council.

After all three emergency motions were passed by council, a group of attendees called for a question period, which was passed by council, in which Morrison, Batchelor, and Kopp were given opportunities to respond to questions about the statements and expenses.

Kopp said that he wouldn’t be able to provide answers on every budget line on the spot but claimed all the expenses were legitimate and that the audit would show that.

During the often hostile questioning by members, Kopp pointed out that he and Morrison had been involved in ongoing mediation and that today would be Morrison’s last day serving as a member of the executive since she had tendered her resignation on Monday. His comments were quickly shut down by Mirecki and deemed inappropriate and confidential by members of council.

Morrison pointed out a sharp increase in credit card use under Kopp’s term and claimed there was a culture of fear in the office, which may have led to staff being afraid to not sign off on expenses.

Breaking with conventional seating arrangements, Morrison, with vice-president external Astitwa Thapa, sat on the opposite side of the room from Kopp and vice-president advocacy Rebecca Kunzman. LeClerc sat apart from both pairs of executives.

Directly after approval of the agenda a presentation was given by Isaac Weldon, vice-president of the Arts Student Body Council (ASBC), and ASBC chairperson Cole Kubay, on a petition for a referendum to recall Kopp.

Both students cited the credit card issue, bylaw infractions, and a culture of fear as reasons for their petition.

Other issues addressed later in the meeting included the ongoing contract dispute between UMSU and U1SC and a motion to replace Morrison with Jessica Smith, the incoming vice-president student services, for the remainder of this year’s term.

The Manitoban is actively updating its coverage of this story and a number of stories that broke at the March 10 UMSU council meeting:

UMSU irons out security issues with The Hub