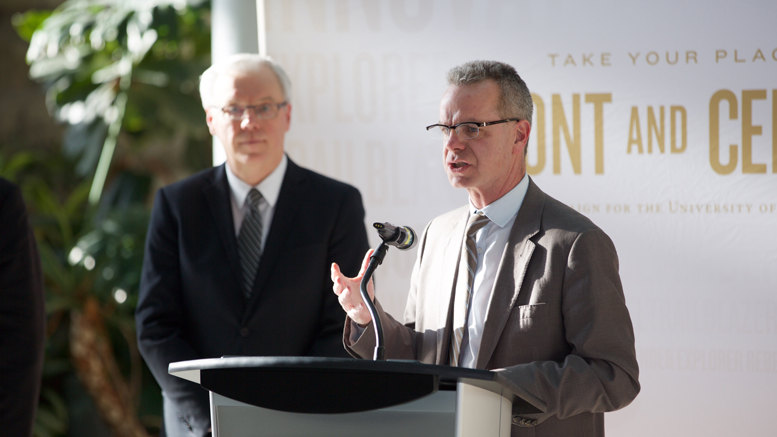 With a provincial election around the corner and the University of Manitoba facing a second round of cuts to its operating budget, post-secondary education funding is likely to be a contentious issue on the campaign trail.

The incumbent NDP government recently committed $150 million to the U of M Front and Centre fundraising campaign over a seven-year period and has signalled it will continue to hold tuition increases to the rate of inflation.

However, the U of M administration has called for an increase in tuition, cut its operating budget by four per cent for the current 2015-16 school year, and said a further four per cent cut is on the table for 2016-17.

The election is expected to be hard-fought, with the NDP seeking a fifth consecutive mandate in the face of public opinion polls that have shown the party in second or third place behind the leading Progressive Conservatives under leader Brian Pallister. The election takes place on April 19.

The Manitoban sat down with Fort Garry-Riverview MLA and minister of education and advanced learning James Allum to discuss the election and his party’s priorities for post-secondary education, including funding, tuition fees, and goals for indigenous education.

MANITOBAN: University of Manitoba administration regularly points to low tuition fees to explain four per cent cuts to its operating budget for 2015-16. There is another cut scheduled for this coming year, so what is your response to U of M president David Barnard’s claim that tuition fees in Manitoba have not kept up with the demand and need for quality programming?

ALLUM: I think what we have tried to do in our government is to ensure that students have a quality, affordable, inclusive education. That’s why we have among the lowest tuition rates in the country and that’s why we have among the highest funding for colleges and universities in Manitoba, so that we keep it affordable for students. And, by the way, we also took interest off student loans, as well.

M: The government maintained a tuition freeze for about decade until 2009 and has kept increases to a minimum since. The last was 1.9 per cent, and as you said, tuition in Manitoba is among the lowest nationally. Barnard has said he wants to see tuition come up more toward the national average. There was a report in 2009 that called for moderate tuition increases but said it should remain below the national average. Where do you stand on that?

M: Is there a trade-off between low tuition and quality of education?

A: Not in my world because we, by virtue of providing among the highest level of funding to universities in Manitoba, want to ensure that resources go into classrooms, not into boardrooms. I’ve said that publicly many times and I’ll say it again for you. There doesn’t have to be a tradeoff at all because we insist that resources go into classrooms to serve students, not into boardrooms.

M: The university is still having to make cuts, though. So how do you think they can make up that additional funding?

A: The university, like all organizations and all institutions, has financial pressures and they do their very best to address those. That’s a conversation that needs to go on inside the university, on campus, and there has to be collaboration and discussion among all the partners on the university committee.

What I can tell you is that we not only talk the talk, we walk the walk by virtue of keeping tuition low, by expanding pathways for students, and by ensuring that everyone is included on the university campus.

M: Is there any concern when the universities fall short that they might reach out more for corporate funding and get into the kind of controversy that the University of Calgary finds itself in, in terms of facing questions about academic independence?

A: I think that we always need to respect the arms-length relationship between the corporate world and campus life, between the government world and campus life, but we do know that in campaigns like Front and Centre that a $150-million investment from the government leverages a $350-million investment from private donors and the corporate community.

That all adds up to a better quality of life for students on campus, as well as opening up doors that didn’t previously exist […] So while we’re always concerned and always alert to corporate penetration on campus, we also have to recognize that there’s a partnership there that can be leveraged in order to improve the life for every student on campus of the University of Manitoba.

M: In the context of indigenous education priorities, do you think that’s something that should be left to the individual institutions? For example, the University of Winnipeg has their mandatory credit requirement and the U of M is currently discussing the possibility of a mandatory indigenous course. What is your stance on whether it should be integrated into existing programming, or a mandatory requirement?

A: I think what I like about the U of W model is that it was student-generated. There was a demand from the student community that this is something that the university needed to do and the university responded. If that same demand happens at the University of Manitoba, one would expect it would probably play out in the same manner but it could go in different ways, as well.

You know, it’s not a matter of either-or, it should be this or should be that. What we know for sure is that we’re in an era of reconciliation and post-secondary education institutions need to step forward, step up, and be partners in that reconciliation process, and that’s exactly what we see happening today.

M: And you see the government in a support role in that, where the institutions lead their own programming priorities?

A: Universities, as you know, operate at arm’s length from the government. Of course, we’re a funding partner, we have outcomes that we want to see, we have conversations [about] how we think those outcomes can be achieved, and we work together with each of the institutions to try to do that, either as a collective or individually as the circumstances suggest themselves. So for me, it’s making sure that we’re being responsive for the need for reconciliation and then having the institutions, college or university, develop the kind of programming that they need to do in order to meet the goal of reconciliation which is a central issue of our time.

M: There’s an argument that indigenous education needs to be emphasized more at the primary and secondary levels. Wayne Ewasko, the Progressive Conservative education critic, told the Manitoban that the government has fallen short in that area. What’s your response to that?

A: Honestly, it’s the height of hypocrisy for the Pallister Conservatives to be suggesting that this government has not gone far enough on indigenous education or on reconciliation. In Manitoba, we have been teaching about the treaty relationship and residential schools far earlier than any other government in Canada. We’ve wrapped that into new legislation that I tabled in the fall […] We have a First Nation, Metis, Inuit education policy that has three main goals to it.

One is, of course, an appreciation for the history and culture of indigenous people among all students in Manitoba and that will happen all throughout the curriculum. Second, a concerted effort to deal with that focus on fundamentals, on literacy, on numeracy, for every child but particularly for indigenous learners because we know, the science tells us, that when you have that strong foundation you’re going to be a successful student going forward; and then, thirdly, training and entry into the labour force.

For Mr. Ewasko, of all people, to suggest that this government hasn’t gone far enough when we’ve been leaders in Canada, and they have offered up absolutely nothing and voted against every budget, it kind of tells you where they’re coming from as well. No plan. No desire, it seems to me, for reconciliation, and it’s really kind of consistent with everything that the Pallister Conservatives talk about. No plan, other than cut budgets and if you think that the university is going through some difficulty with their own budgeting now, just wait if a Tory government should ever occur in Manitoba.

M: To go back to the election, you touched on it, but how does the NDP differ from the Progressive Conservatives on post-secondary education policy?

A: I think it’s on a whole range of issues. It starts with funding, that’s for sure […] [Year-over-year base funding] increased by $9 million this year to the University of Manitoba and a $27-million package to all of our institutions […] Everyone got a sizeable increase, over the rate of inflation, I might add. So it begins with funding and it certainly includes tuition […] In similar economic circumstances in the 1990s, [the Progressive Conservatives] chose a different direction and allowed tuition to skyrocket plus consecutive years of either zero increases [in funding] to universities or cuts of two per cent […] So we diverge on funding models and our support for universities and on keeping tuition affordable for students.

They were not supportive of the direction we were going, to have a more direct relationship with our institutions so that we could partner and collaborate together. They prefer a more authoritarian model that tells universities what to do and that’s it, and that’s all it’s going to be. Certainly that’s what happened in the 1990s and that’s likely to happen again because, let’s face it, Mr. Pallister is very authoritarian in the way he operates. He’s not collaborative. He doesn’t engage in partnerships, he’s very authoritarian. The austerity that the Tories are going to practice across the board, [some of Pallister’s planned] $500 million in cuts is going to find its way into classrooms.

M: To go back to the Front and Centre campaign, your government committed $150 million and that is slated to be delivered over seven years. At the same time, there was a previous five per cent operating grant increase that was supposed to be carried on for three years but after two it was cut in half, in 2013, to 2.5 per cent. Can we count on the $150 million coming through?

A: Yes, on the condition that we’re re-elected because Mr. Ewasko has made it quite clear that he doesn’t support the Front and Centre campaign and they would not have invested in it the way that we did.

Let’s remember that over the three years, the University of Manitoba got a 12.5 per cent increase – five, five, 2.5. It’s true it was a commitment to five, five, five. We couldn’t quite get there in the third year, but 12.5 per cent over three years was a significant investment into the University of Manitoba and every other institution in Manitoba. I defy you to find another government that’s been that consistent in ensuring that universities have the funding support they need from their provincial government.

Decolonizing political studies at the U of M