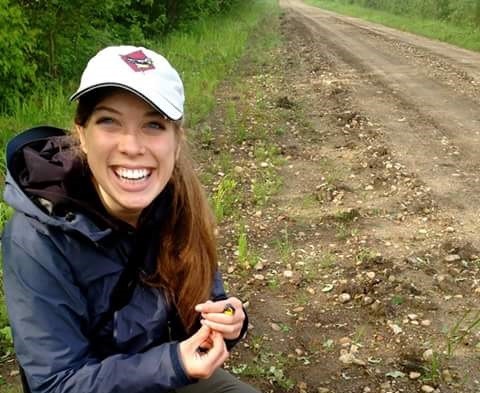 Roberto-Charron, who completed her undergrad in ecology at the University of Alberta, developed an interest in bird ecology unexpectedly after taking a required course on the topic.

“It was a pre-requisite for my program. I was forced to take a bird studies course […] I was certain I wanted to go into plant ecology, and birds were not my thing,” she said.

“As I started taking the course, I found it really interesting, and that’s what got me into the bird world.”

The required course changed the direction of her career. Roberto-Charron found herself birdwatching with local groups and volunteering at the Beaverhill Bird Observatory, where she would eventually become the executive director of the non-profit.

Through the observatory she learned of a research opportunity at the U of M studying migratory birds with a particular focus on the Canada Warbler.

The Canada Warbler, like many other migratory birds in Canada, is declining in numbers rapidly across the country. Between 1968 and 2007, migratory bird populations declined by as much as 85 per cent.

What may be particularly interesting is that the decline is not proportional across Canada; populations are declining more rapidly on the eastern side of the country. The reason for this disparity is unknown.

Roberto-Charron is trying to find out if there is strong connectivity in the Canada Warbler’s wintering range in the Andes and northern Amazon, their breeding grounds in Canada across the boreal forest, and the migratory route between the two.

Connectivity describes the relationship of a specific population’s geographic location at different points in the year. High connectivity would indicate that the same population tends to migrate to the same locations, while low connectivity indicates overlapping of different populations in wintering ranges.

This connectivity, or perhaps lack of connectivity, of wintering and breeding grounds could provide some insight into what may be causing the decline of migratory birds.

Another aspect that makes Roberto-Charron’s research particularly unique is that the birds are being tracked for the first time with geolocator devices.

“What’s neat about geolocators is that they’ve only just become miniaturized enough to track songbirds like the Canada Warbler,” said Roberto-Charron.

“When they were originally developed, they were developed for marine mammal tracking, and now they’ve become miniaturized enough that we can put them on songbirds, and they can fly across the Americas to their wintering sites and back.”

The geolocators, manufactured by Migrate Technology Ltd., weigh roughly half a gram including the harness. The Canada Warbler is between nine and 12 grams in weight. At this weight, the tracker hardly affects the bird.

The geolocators are able to track the birds by recording light levels (sunrise, sunset, and high noon) and matching them to corresponding time (Greenwich Mean Time). This information is then used to determine the bird’s latitudinal and longitudinal location.

In order to fit the devices onto the birds, researchers travel to a deployment site and set up a lightweight nylon net six by three metres in size. The netting appears invisible to the birds. Then, a recording of the male’s mating call is played.

Since Canada Warblers are territorial, they will immediately fly into the area and be caught by the net. The researchers then mount the geolocators onto the birds with harnesses made out of a Stretch Magic jewellery cord – essentially mounting like a backpack onto the bird’s rump with leg-loops. An identification band is also put in place.

The bird is then released and free to make its journey.

The geolocators do not transmit data wirelessly and must be recollected the following year. The Canada Warbler typically returns to its original deployment site, where Roberto-Charron and her colleagues use the same method to capture the birds.

The identification bands are used to keep track of which birds have been monitored and which ones have been recently mounted with geolocators.

The Canada Warblers are being tracked from several locations across Canada, including Alberta, Manitoba, Quebec, and New Brunswick.

Currently Roberto-Charron is analyzing the data from geolocators collected in Alberta, which will give some insight into where the Canada Warblers from this location are going for the winter. Once geolocators are collected from all sites across Canada next year, she will be analyzing the bird’s migratory connectivity.

This data will also provide information that will help create maps of the Canada Warbler’s migratory routes, migration timing, stopover sites, and threats they are encountering on their journey.

The first geolocator recoveries indicate that the birds overwintered in Venezuela and Peru. This is the first time Canada Warblers have been tracked to their wintering sites. These birds travelled over 6,500 km from Slave Lake, Alberta.

While reason for the decline of migratory birds in eastern Canada is still to be determined, Roberto-Charron says there are ways for everyone to help migratory birds thrive.

“Little things like not letting your cat outside […] and putting up decals on your windows can help,” says Roberto-Charron.

Both outdoor cats and window collisions have contributed to the decline of migratory birds in Canada as two of the leading causes of bird death.

In the meantime, Roberto-Charron is analyzing data and looks forward to the information it will yield.

“It’s incredible when you start working with the analysis and you can see where the bird actually went […] and start thinking about this little bird you saw and captured, and it flew all the way to South America and back. It’s amazing.”

This day so hallowed