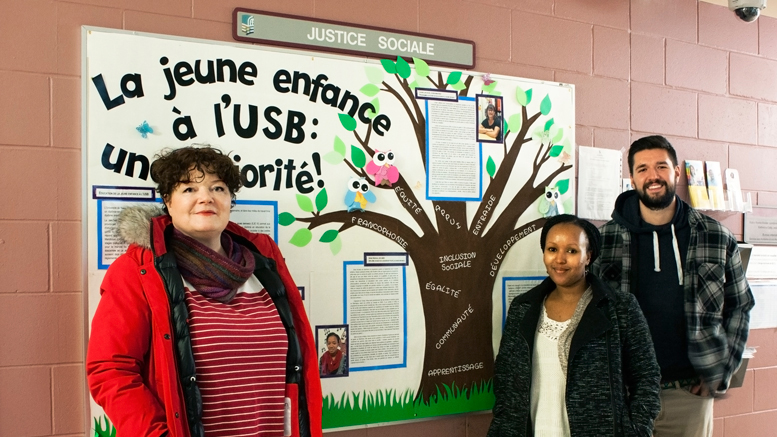 Students of the Université de Saint-Boniface (USB) – the only publicly funded post-secondary institution in Manitoba without on-campus day care – are hopeful the university’s administration will commit to establishing on-site care in the near future.

Manitoba’s only Francophone university received criticism last year after its board of governors decided not to pursue a proposed a multi-million dollar child care centre after provincial funding for the project didn’t come through.

A request for $600,000 in funding was denied when provincial authorities weren’t convinced the university could raise the balance and begin construction within a two-year window. The university’s student union, Association Etudiante de L’Université de Saint-Boniface, also committed to raising $700,000 toward the project over a five-year time frame.

A previous bid to include an on-campus care centre in an expansion project was derailed in 2007 after federal funding was denied. The expansion carried on without the centre.

Proposed in 2012, the most recent effort – the Centre of Excellence for Children, Families and the Community – was planned not only as day care to be used by staff, students and the community at large, but was also intended to be used as a training centre for child care workers. It would be a resource for students to apply their knowledge and receive practical experience, while responding to the lack of available day care spaces in the city.

“The university’s board of governors said that setting up a child care program at the university was not a priority and we found that, to be quite frank, completely outrageous,” said David Alper, a social work professor at the university and vice-president of the faculty union, in a telephone interview.

Alper said he supports an onsite child care centre for a number of reasons: it would support the economy by creating more jobs and promote greater gender equality by allowing more women to access post-secondary education, and as a result, obtain better-paying jobs.

“You can incorporate things that are very positive for public health, such as breastfeeding, which is much more difficult if the day care is miles away,” he said.

He noted the centre would also help address the shortage of French-language day cares available in Winnipeg.
“It’s very important that if we want to maintain the French language in Manitoba that children be educated in French, including in child care centres,” he said.

According to the 2011 census, less than four per cent of Manitoba’s population is Francophone and less than half of those reported French as the language spoken most often at home.

The decision not to pursue the proposal does not mean a child care centre is not an important project for the university, said René Bouchard, USB vice-president of administration and resources, in a telephone interview.

Bouchard added that the application for provincial funding was submitted during the same time period the university was going through a detailed analysis of the proposed child care centre.

Through the course of that study and through dialogue with the province, the university decided to address more urgent priorities, he said.

“The board of governors looked favourably upon the creation of a centre […] and ultimately requested that the administration provide a detailed analysis, a detailed feasibility and implementation plan, before deciding whether or not to move forward,” he said.

When asked whether the child care centre proposal could be reconsidered in the future, Bouchard said factors such as available resources and funding would have to change first.

“If that environment changed, then of course the university could once again consider the project,” he said.

Lucie Asseray, a social work student at USB, said she hopes the university will perhaps pursue a simpler and cheaper project, such as a regular day care. She said it would benefit numerous people having difficulty securing limited available Francophone day care spaces.

Asseray found a private, English-speaking day care centre for her 16-month-old daughter but said she would prefer to see her in a French program.

“I can tell that she responds better to English than French already,” she said. “You can’t blame her because she listens to English all day long. She spends more time at the daycare [than at home].”
She is one of the students who took on an advocacy role for the proposed child care centre.

Asseray and Stéphanie Rouet are part of a group of students from a social work class who promoted the project. They explained that some students created posters, while others sent letters to the editor of La Liberté, created a Facebook page, and talked with agencies.

“I think we need to reaffirm the will that it is a good decision and it’s a responsible decision for the university community, the student community, and the staff community to have the children on-site,” said Rouet.

The USB board of governors struck an ad hoc committee in of last year November to develop a plan for on-campus child care.

Left behind in the brave new world

The ice? No dice