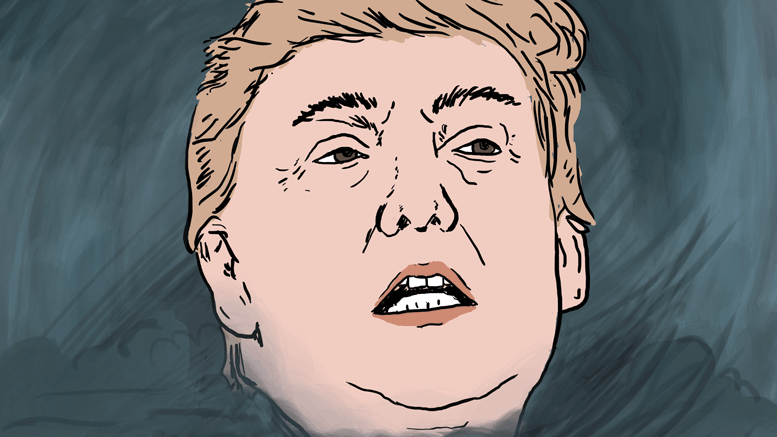 By now Donald Trump has made himself well-known for his rampantly racist and controversial political platform and the questionable comments he has made on his path towards seeking a presidential nomination. Notable examples include his plan to build a wall along the Mexico-United States border to keep Mexicans from entering the U.S. illegally, his proposal to ban all Muslims from entering the U.S., and his plan to end gun-free zones at schools, amongst others.

Although the idea of these policies actually being implanted likely seems laughable to the majority of Canadians, within the U.S. there is sizable minority of voters who openly and strongly support them and who would like to see Trump become the next US president.

At first Trump’s declaration of candidacy seemed like a joke, which was only further compounded once he began making public statements on his political platform and ideals in general. However, it has become clear that Trump is not going away and that there are in fact many people who support his outrageous proposals.

Why, then, is there such a large following when in previous times statements similar to those made by Trump would have likely guaranteed failure in any political situation, let alone the presidential race?

The support for Trump in the U.S. is illustrative of an increase in a more generalized social and economic uncertainty felt by a large portion of individuals in not only the U.S., but other Western democracies as well, including Canada. This rising insecurity stems largely from stagnant social mobility, an increase in precarious employment and unemployment, and fear-mongering that is perpetuated by the media through over-representation of crime, terrorism, and other sensationalistic news stories. Social insecurity has always been present among members of society, but it seems like recently it’s been on the rise.

As a result, feelings of fear and instability held by the general public are reconfigured by politicians – largely conservative – as being problems perpetuated by the most vulnerable and disenfranchised individuals in society. In particular, it is the poor, racialized individuals of society who are seen as a threat to the wellbeing of other individuals. This point is illustrated perfectly by Trump’s infamous statement about Mexican people in the U.S.: “They’re bringing drugs. They’re bringing crime. .”

The decline of social security can largely be blamed on free-market capitalism (though that’s a story for another time), but the response to social in has been the implementation of social policies that target the most vulnerable and essentially criminalize the poor.

In Canada, in previous times, this included changes to social assistance policies making it harder for individuals to get assistance, whereby drug testing became mandatory for receiving assistance and life-long ineligibility for violating any of the requirements.

In the U.S., Trump claims that the Mexicans residing in the U.S. are to blame for many of the social problems Americans face, and in turn their decline in social security. But they are certainly not the reason why so many Americans are feeling disadvantaged themselves.

Job loss, precarious and low-skilled wage work, and high debt loads are not the fault of Muslims, Mexicans, African-Americans, those accessing social assistance, those who are incarcerated, or anyone else who is deemed a deviant. The precarious situation that many individuals of Western nations find themselves in can be directly attributed to social policies made by neoconservative politicians, in which many of the previous social safety nets that existed were stripped and replaced with a “pull yourself up by your own bootstraps” mentality.

Unfortunately, it seems as though many people have been convinced that implementing more punitive social policies towards those who are most vulnerable will “make (insert country here) great again.” The only thing that these types of policies will achieve is more poverty, crime, debt, violence, and disenfranchisement for society’s most downtrodden.

Fortunately, there are a few politicians that share these sentiments and who will hopefully get the chance to correct mistakes made in the past. Here’s hoping.

U of M gives fee deadline extension to Iranian students