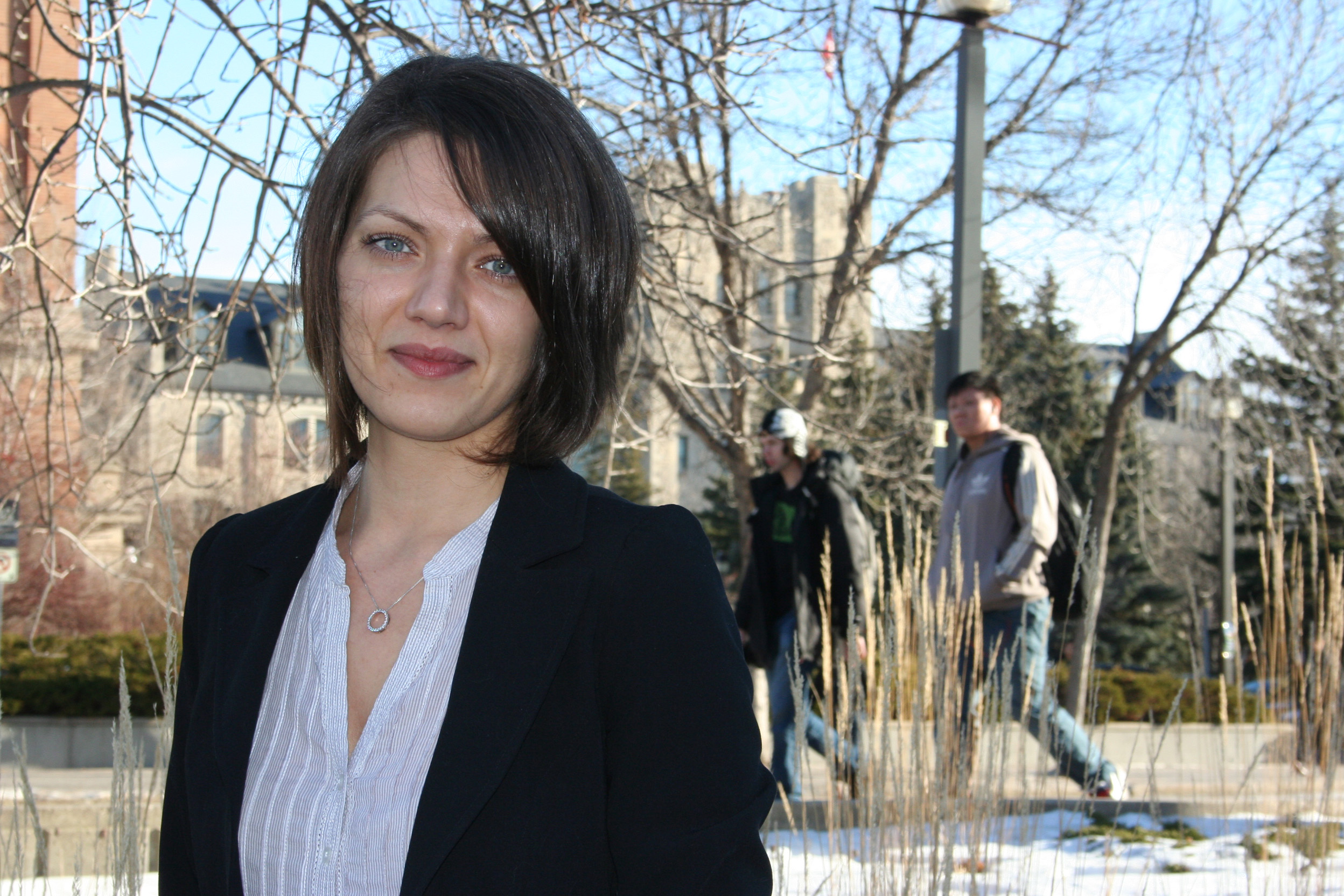 Irina Volchok is a University of Manitoba graduate student studying linguistics. Moving into the second year of her graduate studies, she has shifted her focus to Algonquin languages after stumbling upon them during her undergraduate degree.

“My first exposure to Algonquin languages, just to the fact that they exist, was when I was working on my bachelor’s. I had a course called ‘Canadian Languages’ and it’s through the department of linguistics. We looked at what kind of languages are being spoken in Canada: Ukrainian, French, English, sign language, and Aboriginal languages.”

“We looked at a lot of historical events, too, that are so important to the history of Aboriginal people. You can’t talk about a language without knowing a history of the people who speak it. Last year, during my first year of graduate studies, I was enrolled in a course looking at the structure of languages and it just so happened that we were focusing on Cree. I fell in love.”

Volchok, who speaks English as a second language and Russian as her first, immediately noticed a difference in the grammatical structure of Cree when compared to English, and found the structure of Cree similar to that of her first language.

“In Russian, word order is free. So basically you can put ‘I’ anywhere you want in a sentence and people will understand you. However in English, if you’re talking about ‘I,’ it needs to be an initial part of the sentence because word order in English is fixed. If you put ‘I’ somewhere else in the sentence, you might not be completely understood,” she explained.

“When I was looking at Cree, word order is basically free too; it doesn’t really matter where you put nouns because the verb is always the core of the sentence. If you communicate with the verbs, and a couple nouns, you will be completely understood.”

Cree, said Volchok, has another significant distinguishing factor when compared to English.

While English tends to be centred on nouns, the core of the Cree language is verbs. The complexity of the verbs is likely a function of the importance of action within the culture, whereas in English, the focus is more individualistic.

“Most fascinating to me is that in Cree, the action word is a very sophisticated part of speech. The verbs can get super long. What they do is they communicated by means of verbs, which is so interesting. In one verb, there can be an entire sentence, whereas in English, you would have to have several words to express what you are trying to say.”

In Cree, prefixes and suffixes are added to the verb to communicate who is talking, to whom they are referring, and whether or not the action is continuous. Similarly, adjectives do not exist in Cree – they use verbs.

“Cree does not have adjectives, like ‘beautiful’ in English. What they do is they have a word that means ‘be beautiful’ instead. Lately I’ve begun to use adjectives in English as they do. So the other day I said, ‘that happied me.’ That’s my Cree slipping through,” she said.

Volchok’s primary focus in her research is obviation, which is the means by which multiple third-party individuals are distinguished when more than one of them occurs in a sentence. Algonquian languages, including Cree, are of particular interest to linguists studying obviation because these languages impose a proximate/obviative distinction in their speech.

In this system, one third-party individual in a sentence is unmarked, while the rest of the individuals are marked with a suffix to differentiate them from the initial subject. The verb is also marked with the same suffix. In a sentence such as “Josh saw the bears,” “Josh” would be unmarked, while “bears” would have an obviative suffix added because it co-occurs with another subject (“saw” would have the same suffix).

Volchok, through her study of Cree and her experience of being bilingual, wishes that others would see the benefits learning another language has on one’s cognitive abilities and worldview.

“I wish people would be interested in learning an additional language just for the sake of it, because it challenges the way you think of culture, the way you feel culture, and it opens up your mind so you can think outside of the box. A language opens up your brain to think of things in a completely different manner – it allows you to be more innovative and creative.”

A falafel with a side of art

Talking through the flower