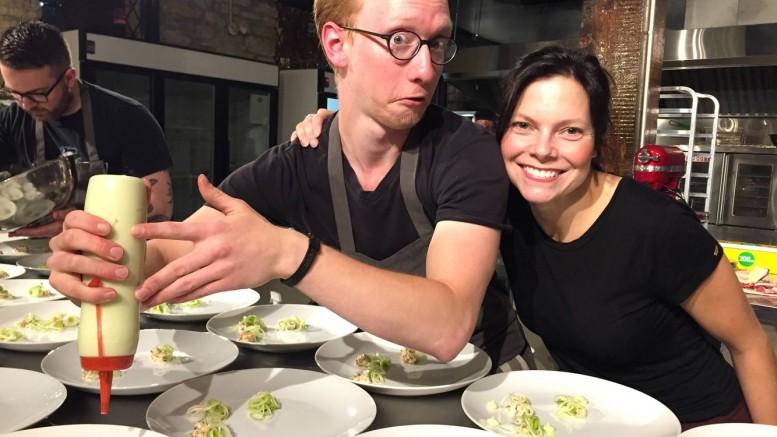 Photo provided by the Sentruhl Project.

Central [sen-truhl]: In, at, or near the centre. Example: Winnipeg, Manitoba.

Gordon Bailey has been involved in the restaurant business since he was 13 years old, when he got a job in the dishwashing station at a local restaurant to buy a “super cool remote control car.” He quickly moved up to cooking breakfast and became hooked on the culinary arts, travelling all over the world to work with different chefs.

“Once the bug bit me, I never shook it,” said Bailey.

He and his wife eventually settled on Prince Edward Island where the two opened up a restaurant, Lot 30. The two lived there for roughly 16 years before deciding to return home to Winnipeg to be closer to family.

Upon moving back home, Bailey’s plan to make a living through his passion was obvious : open a new restaurant. The two packed up the Lot 30 kitchen into a tractor-trailer, which Bailey jokingly describes as an “IKEA-style restaurant in a box,” and headed to the centre of Canada. Prepped and primed with experience, only one thing was missing: space.

“When I couldn’t find a spot right away, I actually looked into where Sean Audet  was at the time – a restaurant in Kelowna, Mission Hill Winery. So I sought him out and asked if he would want to be partners in a restaurant in Winnipeg, and he said yes,” explained Bailey. “I thought he was going to take some time to think about it, but he actually took about five minutes before agreeing to it.”

Audet made the move to Winnipeg and the pair continued their search for a location.

About a month and a half into their search, they stumbled upon Shelia Bennett’s new venture, Kitchen Sync. Bennett’s business essentially offers a rental kitchen for those looking to gain experience in the restaurant industry or host a private event such as a cocktail reception or wine tasting.

“We thought if we can’t get a spot right away, let’s get the ball rolling and feel out what the Manitoba marketplace is looking for, what the diners are doing, what the producers are producing,” said Bailey.

“We’ve been away from this province for so long that I wanted to get my hand back on the pulse. In order to do so, why not use this space on weekends and create something really unique and different.”

The partners struck a deal with Kitchen Sync, booking the space exclusively for Saturdays and Sundays to start their culinary project.

Each weekend, the restaurant takes on a new persona – new theme and new menu included. The temporary restaurant then opens its doors to roughly 40 people, who have made reservations in advance.

“We strive to come up with a completely new concept every weekend. Whether it’s the menu or the dining experience itself, we want to bring forward something unique and this is what our situation is allowing us to do. It’s really exciting for us, and we hope it’s exciting for the community as well,” said Audet.

The process of coming up with a theme and corresponding menu comes very organically for the Sentruhl Project team, according to Audet.

“It’s a lot of little ideas that expand one way, and then another. We’ll have an idea and we’ll all feel really good about it so we start reading and looking up material, reading old articles, looking up posters. From there – and I know it sounds really abstract – but we can pull concepts,” he said.

“The whole reason this has been successful, and continues to be, is that we let it come organically to us. We don’t try and force it; we try and come up with really cool concepts, make sure we can tie the food to it, and make sure it is something that we’ll be interested in. Once you start putting all those things into the pot, the ideas just start bubbling out,” added Bailey.

The first series was a journey across Canada, focusing on the East coast, then the Canadian Shield, the Prairies, and finishing with the West coast each subsequent weekend. About halfway through the series – after consistently selling out each weekend – Audet and Bailey knew they were onto something.

“We basically did our first four weeks with the first series and realized that we could keep this going. The whole thing started out with us wanting to get the ball rolling and – for lack of better words – keep busy while we find a space, and it exploded into something with a lot of dimension and a lot of intriguing elements to it,” said Bailey.

“I know there’s going to be a point in time where we have to sever ties with the weekend deal and do it full time, but I feel at that point we’ll know exactly what we want to do, what Winnipeg needs, and what’s going to keep us motivated and having fun in this industry.”

Veganism is both personal and political