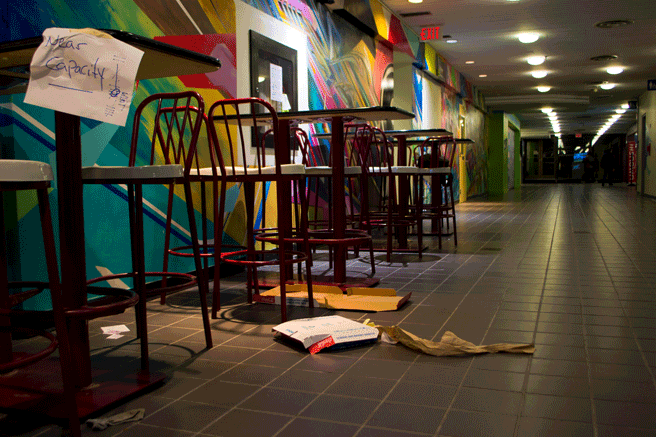 In a full-page trumpeting of the University of Manitoba Students’ Union (UMSU) executive’s accomplishments, UMSU president Jeremiah Kopp refers to the renovations begun and planned to the hallway on the third floor of University Centre as a “marquee, $1.4-million, world-class capital project.”

That’s the kind of hyperbole (some might call it bullshit) that makes me blush, and then write an article about it.

We’ll skate over the things that might go into making an actual world-class hallway; they involve a subtle understanding of design and purpose of location I suspect would be lost on the group of students that sees the defining purpose of an institution of higher learning as getting the best acts for Frosh. Having a world-class hallway would involve having a world-class understanding of the function of that hallway; it would involve the understanding that what would be a good addition to a mall might not be the best thing to replace quiet study areas at a university. People come to university to study, not to consume.

What are we getting, that UMSU Street will be considered world-class? An expansion of Degrees, and remodeling of IQ’s have both been mentioned; the addition of a patio to the Hub was previously in play. They’re all UMSU businesses, and it’s in the interest of students that they do well, but one has to wonder if lack of capacity is really what’s holding them back.

Lacking architectural renderings , it’s difficult to acquiesce to a “world-class” label. There is some really beautiful architecture out there, in the world. What evidence do we have that the planned expansions will hold a candle to it – or for that matter, even be of the same quality of the current spaces?

A “fresh coat of paint”, which “showcases student artwork” was mentioned in the Your UMSU policy book – nothing against said artwork, but the mural they’re talking about (already completed) doesn’t strike me as world-class. There was also mention made of improved lighting; I suppose you do need good lighting, if you want a marquee. Some tables and chairs outside of Degrees; too few, and too cheap, to make much of an impression or difference.

So far, none of the changes mentioned add up to world-class. They add up to the kind of minor improvements that might be expected as routine to a building in constant use since 1970. This leaves us with the campaign promise to bring in local businesses Shawarma Khan and Green Carrot as the only thing that Kopp could mean when he uses the phrase world-class. Apparently, for the UMSU executive, world-class is synonymous with “slightly increased options for spending money.”

That attitude is unpleasant as a personal position; it’s the kind of attitude that ascribes “world class” to “biggest” and “newest,” that sees no irony in calling a cookie-cutter suburb built on virgin prairie “world-class” if it has the same colour palette as suburbs in wealthier places. Any business, according to this attitude, is better than no business.

But this isn’t a personal position. UMSU collects money from every single student, every single semester. That’s the money it’s using to bring about its vision of world-class. Students that cannot afford the luxury of Shawarma Khan or a smoothie or whatever other minor luxury ends up replacing study space will be involuntarily subsidizing the purchases of those students who can.

One year, I went hungry for two weeks before the start of school – I had enough money in my bank account to pay tuition, and nothing else. I was not alone; there is a food bank on campus, and for good reason. I could not afford Mr. Noodles, let alone a smoothie.

Then, as now, it was a source of great bitterness that certain students used the money that was levied on me to support pet projects that benefit only the wealthier, indolent segment of the student body, while adding nothing to the intellectual and academic life which should be the sole reason for attending university.

UMSU Street is not, and will not be, what Kopp claims. The $1.4 million of our money that he seems eager to tell us he’s spent will go towards making the third-floor hallway (I’m sorry – UMSU Street) a little bit more like any mall food court, and a little bit less like a university – not a good thing, and certainly far short of world-class.

Self-order kiosks — the future of food on campus