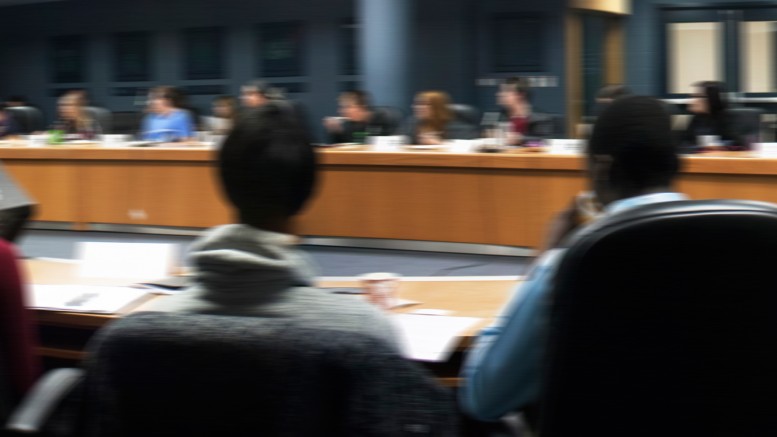 The University of Manitoba Students’ Union (UMSU) has approved an omnibus motion which includes plans for several new projects, a restructuring of fees, as well as an increase to student fees of $32 per semester to pay for the projects.

The motion, which was passed at UMSU’s Nov. 19 council meeting, makes plans to fund child care on campus, bursaries for indigenous students, undergraduate research, and renovations of UMSU-owned space on the first floor of University Centre (UC).

The motion identifies how the additional money will be spent: $2.4 million toward a child care facility, $3.5 million for renovations to UMSU spaces on the first floor of UC, $5 million for scholarships and bursaries for indigenous students, and $5 million for undergraduate research grants.

UMSU president Jeremiah Kopp spoke passionately to council about the significance of the four pillar projects, starting with the funding for child care for student-parents at the U of M.

“Since the beginning of the year the executive team, the student body, the administration, the province of Manitoba have been working together to try to rectify the desperate child care situation we have. We have 3000 student-parents and only 16 spots for those parents at the Fort Garry campus. That is only the start. Then we have to look at Bannatyne campus which has zero spaces. Inner city social work has a higher representation of childcare spots but there’s still much more that needs to be done,” Kopp said.

“So when we’re looking at UMSU as an organization and throwing music events and doing advocacy and a speaker series – all things that take a good student experience and make it great – it all kind of seems a little trivial when you compare it to somebody who is unable to attain an education because of their family situation.”

Kopp went on to speak about the increased funding for indigenous students, who he identified as “our most vulnerable population here in Manitoba.”

“When you look at the social fabric of Winnipeg and Manitoba, there is a great chasm that exists between our indigenous and non-indigenous people. And for most of my life – I can only speak for myself – I have not been a friend to the indigenous community. My education on a personal level was not at that point,” Kopp said.

“Looking now at the impact that we could make by funding scholarships and bursaries to pay students who [with] everything that they’ve gone through in life would say they shouldn’t be in university and yet here they are, having an opportunity. And I believe that it’s our responsibility to make sure that they are supported through it, that they get through it. And it’s not about giving them a leg up, it’s about evening the playing field.”

UMSU Aboriginal representative Wabshkigaabo (Will Landon) said he hoped the motion would help to stabilize the organization and suggested the funding for bursaries for indigenous students represented a positive step for the union.

“Most indigenous students that I talk to suffer a lot of stress due to finances. This is added on top of school stress, family, etc. At the end of the day indigenous students are one of the most vulnerable populations that rise above extraordinary circumstances that most non-indigenous students will not face in their lives and they should be supported by UMSU in any way they can,” Landon wrote in an email to the Manitoban.

“Despite the popular belief, we do not get education free or get paid to go to school. Most indigenous students barely have enough to pay for rent, utilities, and food. I am one of these students. I know it will mean a lot for the indigenous population, it also shows that we as a union recognize the economic inequality that exists in this country and are implementing steps to solve it.”

Beyond the increase in fees, several fees are also being tied to inflation. They include all fees managed by UMSU – such as UMSU operating fees, UMFM fees, UMREG, and fees for Engineers Without Borders’s U of M chapter – but exclude fees collected for the U-Pass and UMSU’s health and dental plan.

A number of other changes were included in the motion, which contained eight subcategories: financing, fee structure, accounting and budgeting, fund management, accountability controls, transparency and reporting, financial planning, and governance.

Some of the other less notable changes included separating UMSU businesses’ revenues and expenses into a separate fund titled “business operation,” moving service group funding from the endowment fund to a separate service group fund which will be financed by a service group fee, and creating an UMSU contingency fund. However, none of these aspects of the motion were discussed during the meeting.

Despite the breadth of content most of the meeting’s discussion centered around the four main pillars as well as concerns from a small group of councillors that there hadn’t been a sufficient amount of consultation for such a major motion.

While some of the councillors questioned whether a referendum would be necessary, no one raised concerns about the actual content of the motion.

Kopp explained the consultation process to council, which included meetings with individual UMSU councillors and senior sticks as well as an email survey sent to students (which received 3000 responses), all of which took place in the weeks prior to the meeting.

“Shouldn’t something as big as this be put to a referendum? Let the students that are part of this union vote on this instead of 42 members representing 26,000,” said Andy Fenwick, UMSU’s students living with disabilities representative.

Kopp responded by arguing that the council had been given the authority to make these decisions and pointed out that historically referendums are very rare at the U of M. He suggested that referendums have been reserved for controversial issues, and cited high levels of support from surveys and meetings with student leaders as proof of support for the principles of the motion.

A motion to delay the vote until the following meeting was defeated 12 to 16 and a subsequent motion by Fenwick to divide the motion into multiple distinct motions was ruled out of order by the chair.

The final vote had 25 councillors in favour, two against, and six abstentions.

Harrison Katz, UMSU representative for the St. Paul’s College Students’ Association, voted in favour of the motion and agreed with Kopp that the council was within their rights in passing the motion without a referendum.

“I believe that we, as UMSU councillors, were voted in to do a specific job, and that is to vote on motions that are brought to UMSU council,” Katz said.

Katz pointed out that the UMSU survey went out to every UMSU member and 3,000 responded.

“I think that gives UMSU councillors, not necessarily the right, but definitely the courage to represent their students. Because if the individuals during our council meeting were saying ‘Oh, I would like to talk to more students about this.’ It’s like, okay, you can do that. But these students already had an opportunity to see them – to see what’s going on. They always have an opportunity to come to these meetings. It’s not like it happens behind closed doors – none of this [does],” Katz said. “And ultimately, you as an UMSU councillor were elected into this position because of your political ideologies and beliefs and how you intend to represent your students.”