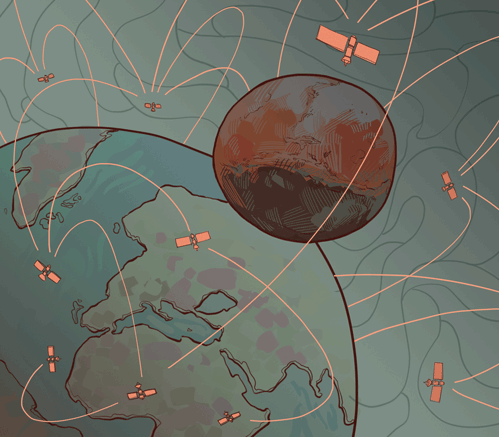 It is estimated that in 2015, only 45 per cent of the world’s population is connected to the Internet. For those of us in more privileged areas of the world, being without Wi-Fi or LTE access is an inconvenience that deprives us of access to Instagram or Snapchat.

The remaining 55 per cent of the world remains without the benefits of instant communication, instant information access, or the ability to share and spread ideas or information.

However, there are many plans being proposed by big companies to change this in various ways, including Facebook, Virgin Galactic, SpaceX, and Google.

So what are some of the plans and challenges lying ahead?

Facebook’s Internet.org initiative targets the obstacles to Internet access in developing nations relating to cost, perceived value, and infrastructure. Not all people understand the benefits of the Internet, and creating the infrastructure to deliver Internet access can be a costly and lengthy process.

The initiative considers Internet access to be on par with necessities such as food and water. The focus is on developing innovative data transfer methods to allow more data to be sent more efficiently, and business models that will help connect more people.

Internet.org does not attempt to tackle this objective alone. Several high profile tech companies, including Ericsson, Mediatek, Opera, Samsung, Nokia, and Qualcomm are also part of the effort.

Their current efforts include the Free Basics service, which is a service that allows users to access local websites with employment or health information for free from any device used in parts of Africa, Asia, and Latin America.

Internet.org also provides an Innovation Lab service, which allows app developers to test if their apps will work in remote regions of the world, where the infrastructure might be different.

The Challenge: Some critics say that, despite Facebook’s seemingly good intentions, it takes advantage of poverty as an excuse to violate the principle of net neutrality – that all Internet traffic should be treated equally. This is because Internet.org selects which services and websites are accessed for free, and could confuse incoming users into believing Facebook and the Internet are one and the same.

Facebook’s privacy policy and Internet.org’s banning of secure connections have also come under fire. New Internet users may not be aware of the implications of these policies.

OneWeb is a company that intends to launch the world’s largest constellation of satellites into low Earth orbit to provide non-stop global Internet access. Virgin Galactic and Qualcomm are major investors in OneWeb’s project.

OneWeb relies on the development of Virgin’s LauncherOne, a small satellite-launching rocket, which will bring down the cost of launch and become a dedicated launch vehicle for small satellites.

In June 2015, Virgin Galactic signed a contract with OneWeb to launch 39 satellites to provide Internet access, which is one of the largest commercial launching agreements to date.

Similarly, SpaceX has also announced its own plans to launch a constellation of 4,000 satellites to provide global Internet access. Additionally, Elon Musk, CEO of SpaceX, has made statements that suggest Internet coverage would eventually be extended to Mars.

The Challenge: Currently, launching enough satellites into orbit to ensure continuous, global coverage is an expensive task. While Virgin Galactic and SpaceX are actively working to bring this cost down, their plans would still launch more satellites into orbit than are currently there today. There are just over 1,300 active satellites in orbit, with about 700 of those in low Earth orbit. Together, Virgin Galactic and SpaceX want to launch nearly 5,000 additional satellites.

There is also the problem of eventual overcrowding of orbits. Space traffic management of orbits is an upcoming issue the space industry faces as more companies, research institutions, and private citizens gain access to space.

As for Mars Internet, that is still a long way away. Gwynne Shotwell, president and chief operating office at SpaceX, stated that the company’s satellite Internet plans are currently not a main focus for the company, and that the details reported on to date are speculative.

Google’s Project Loon intends on using high altitude balloons powered by solar energy to provide global Internet access. The idea is that these balloons, which float at the edge of space, use algorithms to determine where they need to be and then use varying wind layers to travel in the desired direction, while emitting a signal to LTE devices. The altitude of the balloons means that airplanes, wildlife, and human populations would remain undisturbed.

The project has already gone through a pilot test in New Zealand.

The Challenge: In an article for the Atlantic, Will Butler points out that the Loon balloons could technically be considered unmanned aerial vehicles, not balloons, and that the regulatory framework in place in the U.S. is not ready for the changes that this technology would bring about.

Additionally, it is still not clear which jurisdiction, if any, the balloons will exist in if they are floating in the stratosphere. Some aviation attorneys say that the balloons will still have to ask permission to enter a country’s airspace.

U of M team awarded grant to study long COVID-19

Study finds 28 per cent of Manitobans diagnosed with mental illness