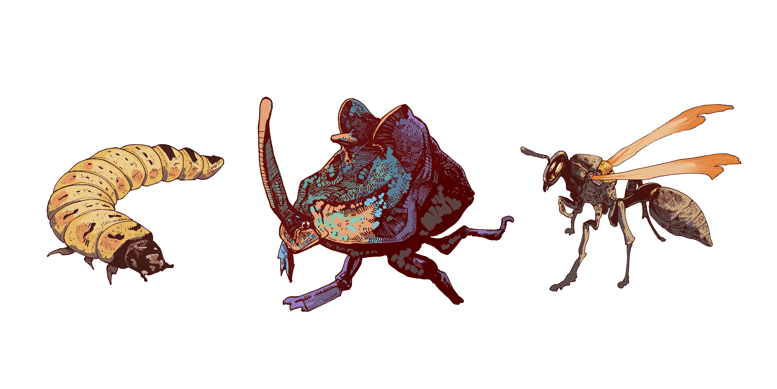 Recent studies on the Brazilian wasp Polybia palista reveal that the venom in their stingers contains what may one day be an effective treatment to fight cancer. The peptide in the wasp’s venom, called MP1, attacks cancer cells by ripping open holes in their membranes. The venom is especially effective because it is selective and only attacks cancerous cells.

Cancerous cells arrange lipids within their cell membranes in a way that leaves them vulnerable to the MP1 toxin, and the cell dies after being punctured.

The venom was tested on model membranes that contained both lipids. MP1 was efficient at breaking open the membranes – the holes in the membrane formed almost immediately. The next step is to continue experimentation with the Brazilian wasp in an attempt to fine-tune the venom into a drug that could be suitable for humans to use as an alternative to our current form of chemotherapy.

Paul Beales, co-author of the original research published by the Biophysical Journal and senior translational research fellow at the University of Leeds, reports that there is still a long way to go before the venom is considered safe for human use.

“As it has been shown to be selective to cancer cells and non-toxic to normal cells in the lab, this peptide has the potential to be safe,” Beales said to the Huffington Post. “But further work would be required to prove that.”

Stanford researchers have presented a possible solution to the mounting plastic waste crisis: the mealworm.

It has been shown that mealworms, which are the larvae of the darkling beetle, can survive on a diet of Styrofoam and other plastics. Plastics, which are considered largely non-biodegradable, have been accumulating in landfills and oceans for decades.

While there are other animals that are able to consume plastic – cockroaches, for example – they were not considered as an option for landfill management because they did not result in by-products which are biodegradable.

The mealworm can not only consume plastic healthily, but also converts the plastic into biodegradable waste.

The researchers, who published their findings in Environmental Science and Technology, fed 100 mealworms between 34 and 39 mg of Styrofoam for a month. Bacteria within the larval gut of the mealworm were shown to have broken down the Styrofoam within 24 hours of consuming it.

They were compared with larvae that were fed a bran diet and had lived alongside them for the month, and found no difference in overall health of either group of mealworms.

The droppings of the mealworms that ate plastic for the month appeared to be safe to use for crops, although further research is needed.

The second study took the gut bacteria of the mealworm and applied it to polystyrene (a form of plastic used for Styrofoam). The bacteria also degraded the polystyrene, but at a slower rate than the mealworm.

Scientists hope that this research will be a stepping-stone to discovering the exact microorganisms that give mealworms this digestive power, which could give scientists the ability to replicate these enzymes.

Along with further studies on the mealworm, the researchers are also looking for a water-bound equivalent to the mealworm to study to combat the huge amount of plastic waste found in the world’s oceans.

Dung beetles and humans have a symbiotic relationship. The humans provide the cattle, who in turn provide the dung from which the beetle gets its name. The dung beetle uses the dung for everything from food to a place for mating, and in turn make the dirt that the farmer uses richer in nutrients.

The extent of this relationship’s impact was not known until recent research in the journal Ecological Entomology reported that the dung beetle’s work could be saving the United Kingdom cattle industry an average of £367 million per year.

The benefits are the result of the dung beetle’s positive impact on cattle. These include less pasture fouling, improved grass growth, fewer parasites that could harm the cattle, and fewer pest flies.

The study goes on to suggest that as much as £40.2 million more could be saved each year if further action was taken to protect dung beetles through agri-environment schemes – financial benefits for farmers who work with methods that preserve the environment.

Cattle are currently treated with anthelmintics, which are drugs that kill or stun parasitic worms. Anthelmintics also affect dung beetles.

The study, which refers to anthelmintics as unnecessary, concludes that ending these regular treatments could save U.K. farmers an additional £6.2 million a year, not including the additional savings from not purchasing anthelmintics.