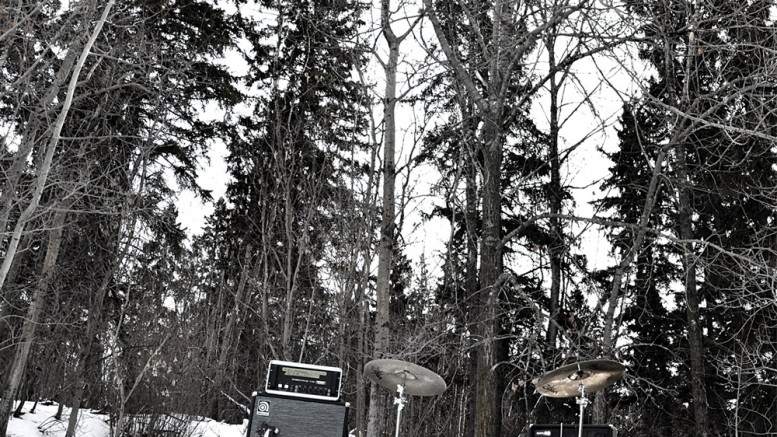 Edmonton’s Black Mastiff is a sneaky band. Their name evokes heavy metal forefathers Black Sabbath. The front cover of Music Machine is stark and monochromatic, featuring a winter forest and a wall of refrigerator-sized Ampeg and Traynor amplifiers with an imposing Rickenbacker bass prominently featured.

These few superficial aspects, coupled with the fact that the band is signed to impeccable Canadian heavy metal label New Damage Records, leads the listener to anticipate a fuzzy, overdriven aural assault in the traditional doom metal fashion of groups like Electric Wizard, Candlemass, the aforementioned (and ever-almighty) Sabbath, or even Down.

In actuality, Black Mastiff are much more “rock ’n’ roll” than all that. What you have here is essentially really, really heavy blues-rock. In that way, it actually does remind one of Black Sabbath, particularly their debut.

The guitar riffs are huge, monolithic, and dominate the majority of the album, but each one has a certain “swing” to it. Couple that with singer Clay Shea’s shockingly sultry-smooth vocals, Music Machine is far more groovy and sexy than metallic and punishing.

The album’s fourth track, “Pariah,” is the best example of this. A quirky, climbing bass riff and thunderous drumming guide Shea’s crooning verses before the song drops into a slow, instantly headbangable chorus at Shea’s Ozzy Osborne-esque cry of “Here I go.”

Other standout tracks include the feedback and guitar effects-laden “Neolithic Grove,” as well as the slow-burning opening track “Near North.”

Unfortunately, this album’s greatest strength is also its most immediately apparent weakness. The band’s riff-driven approach to each song works great overall but because of this, the vast majority of the songs feel like they’re around the same tempo.

Music Machine also sports a crystal-clear, polished production. It’s great to hear every instrument so perfectly, but also detracts from a sludgier, fuzzier 1970s vibe that the record could have had.

If you come at this album expecting these guys to be the next High on Fire or Sunn O))) based on the ominous artwork, you’re going to be severely let down.

However, if you dig proto-heavy metal the likes of Black Sabbath’s earliest work or the lazy stoner rock of Corrosion of Conformity’s Deliverance, pick this bad boy up and let the power of the riff compel you.

Quebec protestors are no heroes