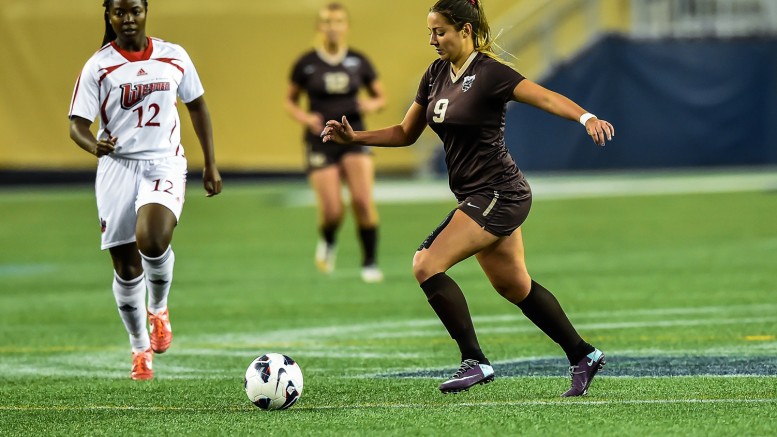 Selina Speranza scored the lone goal in a 1-0 win against Regina on Saturday and then scored again in a 2-1 loss against Saskatchewan on Sunday, as Manitoba concluded their regular season at home with three points.

The winger is the last Bison to score in the regular season, having also tallied their première goal against Thompson Rivers back in September.

Although the match kicked off with a slower tempo, chances were still created by both sides. Regina goalkeeper Savannah Williams smothered an early one-on-one chance by Speranza, while her opposite number Madison Wilford acrobatically held onto a chance in struck from close range.

A minute after Wilford’s saviour moment, she was in trouble with a dipping shot from distance that just skimmed over her bar.

Manitoba was awarded a free kick from a dangerous distance midway through the first half. The set-piece tactic – inspired by Notts County Ladies FC who performed a fake argument of who was to take the free kick in order to psyche out the opposition – nearly gifted the Bisons a cheeky goal.

Defender Robyn Coffey made a crucial challenge late in the first half when she poked Karlee Vorrieter off possession, preventing a Cougars breakaway.

Just one minute into the second half, Speranza provided relief for the Bisons. Sent in on a one-on-one, she kept her composure and finished to the near post for the breakthrough.

“Especially with a breakaway against the goalkeeper, you have to execute and finish for the team so we could get the win to finish the season on a positive note,” Speranza said about her goal post-game.

The Bisons kept the Cougars at bay for the entire second half, with Wilford making a crucial one-on-one save in the 75th minute.

Heading into injury time, Manitoba’s defensive tactics began to crack when Alyssa Daley and Camille Plett took undisciplined yellow cards. The bookings summed up a spell of questionable calls made by the referee during the 90 minutes, but ultimately it didn’t change the result.

During their two previous meetings this season, the Manitoba Bisons lost a preseason and a regular season match to Saskatchewan by 1-0 and 3-2 respectively.

The Bisons got off to the perfect start when Speranza struck just 13 minutes in to their final matchup game of the regular season.

However, Manitoba was not in celebratory mode for long. Seven minutes after the half, Huskies midfielder Erica Hindmarsh scored her fourth goal of the season to draw Saskatchewan level.

Hindmarsh proved difficult for the Bisons to deal with in the first 45 minutes, producing a total of six shots at goal. Wilford saved three of her attempts and two were blocked by defending Bisons.

While Manitoba would have considered a draw a positive against a team that had beaten them twice already, fate just wasn’t on their side.

Hindmarsh scored right at the depths of injury time to clinch a hat-trick of wins by the Huskies against the Bisons during the 2015-16 campaign.

The loss keeps Manitoba fourth in the Canada West table, which means they face MacEwan on the road on Oct. 30 to open up the playoff season.