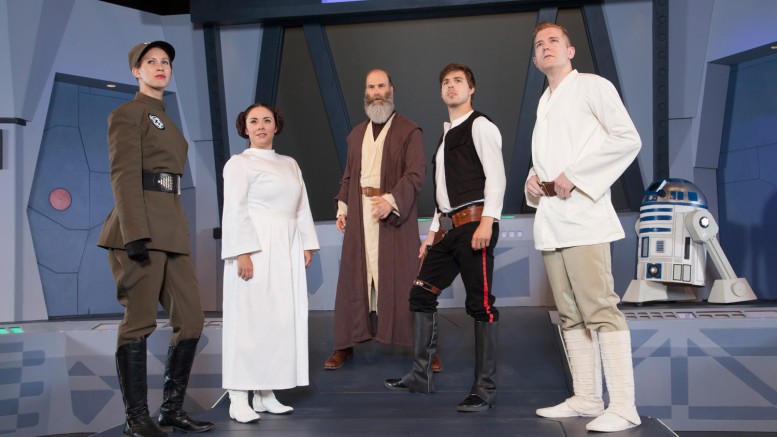 If you’re anything like me, you’ve spent countless hours over the past year scouring the Internet for new tidbits about Star Wars: Episode VII. A teaser-trailer here, a leaked image of the Millennium Falcon there. The wait for the release of The Force Awakens on Dec. 18 has only gotten harder as the date grows nearer.

In an attempt to mollify my building need for anything Star Wars, I decided on a change of course – after all, a person can only spend so much time staring at a blurry image of a bearded Luke Skywalker. I pulled myself away from my computer screen and headed over to Celebrations Dinner Theatre to see their production of Star Warz: A Galactic Rock Comedy.

When I entered the theatre, a giddy smile was glued to my face. Rom Fantini and Jamie Cooney’s set design was gorgeous. The stage had been turned into the interior of one the Galactic Empire’s Imperial Star Destroyers. If an image doesn’t immediately come to mind, think sci-fi spaceship set.

Everything was made of high-tech-looking metal panels. Sliding doors stood on either side of the stage and multi-coloured, brightly lit buttons covered nearly every surface. At the centre of the stage, a ramp led up to an upper platform and the “window” of the ship. Through the window (with the clever use of video projection), one could see the starry expanse of space and – in the distance – the Death Star.

After some tasty soup and salad to start, the Empire’s new PR man Kristoff came up on stage to introduce himself. Then, with no explanation other than that he enjoyed dancing, he began to sing “My Sharona.” Don’t worry, it made as little sense as it sounds like it did.

Off to the side, a screen began to show the traditional text scrolling off into space. “In a galaxy far, far away…” it said, followed by, “Yes, even further away than Transcona.”

If you found that funny, then this show’s humour is for you.

The show’s greatest weakness was its writing. Now, I wasn’t expecting a Galactic Rock Comedy to be Shakespeare, but I was hoping for some clever parody.

The main character was NASA astronaut Luke Skyrocker. He appeared in the galaxy through a strange wormhole while searching for his lost lover. He bumps into Obi-Wan Kenobi and Han Solo (who oddly don’t have parody names), who take him on a journey to destroy the Death Star. At that point, the plot more or less follows that of Star Wars: Episode IV.

Most times, the songs were tied into the plot by a single line. For example, when asked who he is, Han Solo sings the Steve Miller Band’s “The Joker,” which begins with the line, “Some people call me the space cowboy.” Perfect. Very fitting, until the song continues and it’s just a guy dressed as Han Solo singing a cover. Sadly, that example is one of the better ones. Many of the songs were forced into the show for no conceivable reason other than that they were popular rock songs.

Thankfully, all of the performers were quite strong. Brad Zacharias as Luke Skyrocker and Kesinee Haney as Princess Leia had the standout voices, while Corey James’s charmingly over-confident Han Solo and Len Harvey’s wacky old man Obi-Wan gave the strongest acting performances.

So, is it worth seeing? Well, for the student price of $46, and accounting for the fact that you get a four-course meal with the show, it’s not a horrible value. If you enjoy over-the-top silly humour, classic rock covers, and of course Star Wars, then it’s certainly not the worst way you could spend your money and your evening.

But, did it satisfy my Star Wars cravings while I wait for the new movie? No, it didn’t. But in all fairness, until I’m sitting in that theatre on December 18, I doubt anything will.

If you’re interested in seeing Star Warz, the show runs until Oct. 10. For details and tickets, visit www.celebrations.ca.

The Lovers of Valdaro

A look through the horror genre