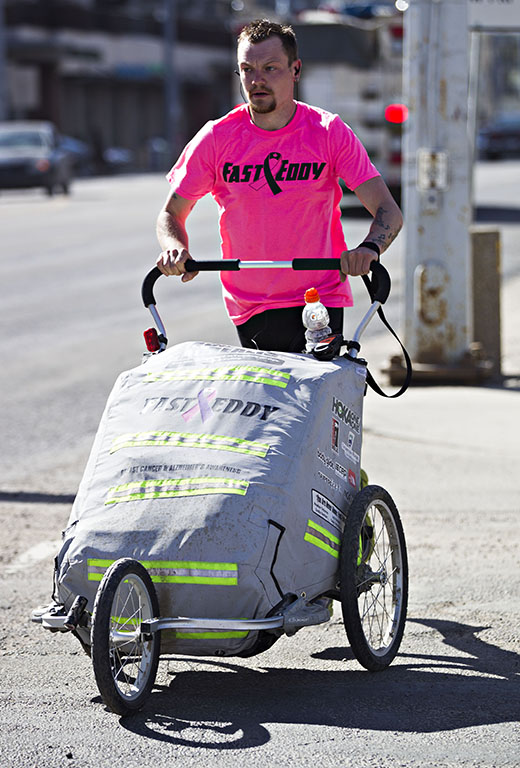 "Fast Eddy" Dostaler is seen at Jasper Avenue and 117 Street in Edmonton, Alta., on Thursday, April 9, 2015. Dostaler is running across the country and back with no support team to raise money and awareness for Alzheimer's and breast cancer. Dostaler, who began this journey on March 1 and has logged 1694 kilometres so far. Codie McLachlan/Edmonton Sun/QMI Agency

Edward Dostaler, also known by “Fast Eddy,” is currently pushing himself on a journey never done before. He is attempting to run across Canada and back in a single trip to raise money for breast cancer and Alzheimer’s.

Dostaler is running solo and unsupported. He is accompanied only by a stroller weighing over 100 pounds, which holds his supplies for the run and his camping equipment.

Dostaler was originally inspired by the stories of Terry Fox and Rick Hansen, who went across Canada (Fox on foot, Hansen by wheelchair), in support of cancer research in 1980, and spinal cord injury research in 1985, respectively.

Dostaler, a native of Hinton, Alta., opted to support Alzheimer’s charities due to his grandmother’s diagnosis with the disease. About three months into his training, he decided to add breast cancer charities in memory of the late Tom Owen – a former professor of his at Thompson Rivers University, who was an advocate for breast cancer research.

Dostaler began his run on Mar. 1 at Clover Point in Victoria, B.C., leaving with $2000 for the entirety of his run. By the time he reached Winnipeg in mid-May, he had racked up a total of 3800km. He hopes to make it to the east coast by Aug. 21.

While there’s still plenty of distance to cover, Dostaler is looking forward to the challenge.

“I’m not coming out of this with anything. I gave it my best, and I quit my job. I’ve literally put all the eggs in one basket, and said, ‘you know what, I’m going for it.’”

Another interesting facet of Dostaler’s run is his plan for distributing money. All donations that he receives from residents will stay within the province that he is in at that time he receives them.

“I want to see my money stay in my province, where I am, that kind of thing. That is very, very important for me. I wouldn’t have it any other way.”

As someone who wasn’t a distance runner growing up, Dostaler’s mental toughness has also been tested, but he said that things get a little bit more natural the further he continues to run, despite sore muscles here and there.

“I feel well adjusted. I run as far as I can, I break a little bit. I run, I break, and do those sorts of things. I realize now it’s not a race. I’m going to get behind,” Dostaler said.

“It’s a great feeling to be sitting there, and feeling well adjusted.”

Along with his official distance of 18,885km, Dostaler will also be stopping in each of the 10 provinces he crosses to incorporate a 24-hour run. These runs will not be added to his total, and he says that he is doing so simply to stand out, which will hopefully help people notice his cause.

“I will take it as it comes, one step at a time, whether it’s an inch, foot, or mile. I will keep moving forward,” Dostaler said. “It may take me a little bit longer, but I won’t stop, I’ll keep going every single day.”

To donate or learn more information about Dostaler’s run, go to www.fasteddycanada.com.

Take Back the Night

Idle No More: an overview