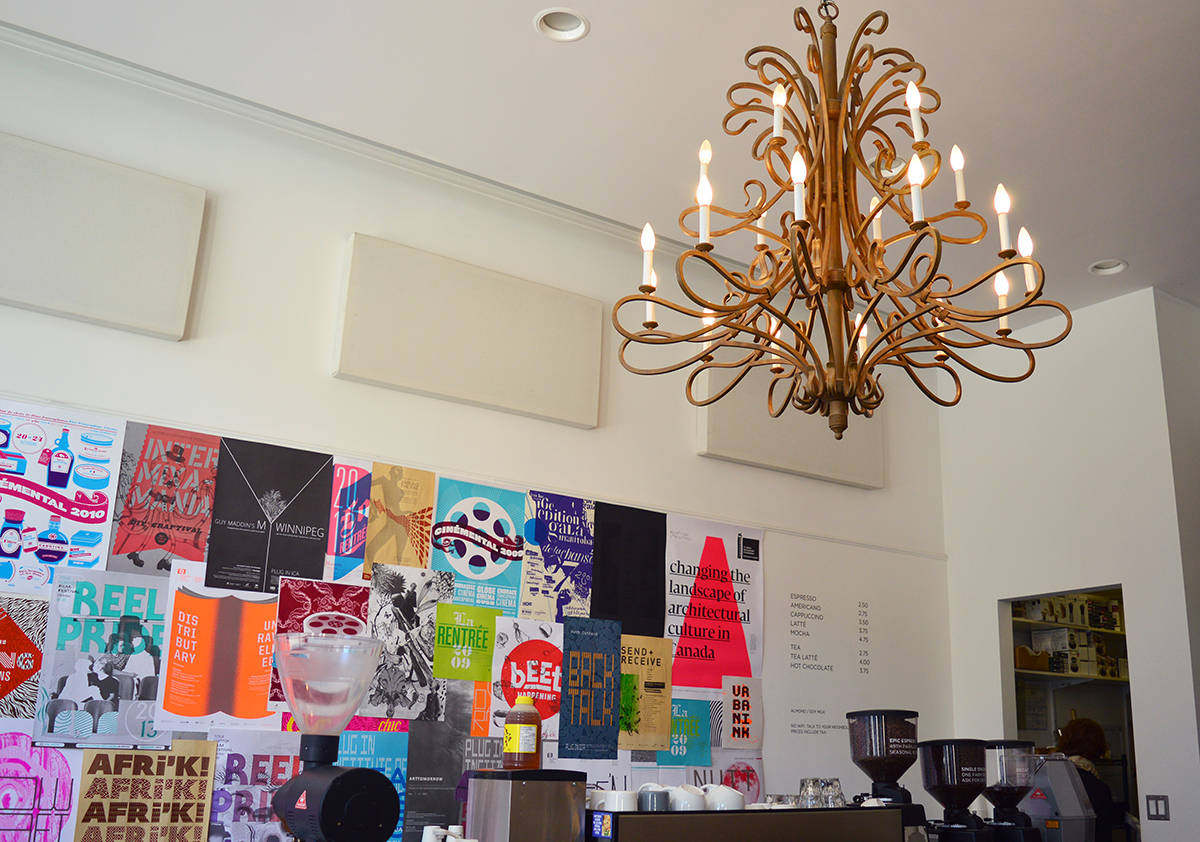 If you want a summary of events that took place in Winnipeg in the last decade, you need only to go as far as Parlour Coffee on Main Street. Besides excellent coffee and quaint decor, visiting the shop now has the added perk of a view of Urban Ink’s latest exhibit, Dix ans d’affiches (10 Years of Posters).

On until April 2, the exhibit has the same effect as reading a cereal box while you eat breakfast. It gives your morning (or afternoon) coffee a touch of inspiration. Taking up the entire back wall, it’s impossible to ignore, and the burst of colour feels like the only bright thing in the middle of winter.

The posters tell the story of what has taken place in Winnipeg over the last 10 years. Film festivals, craft sales, and lectures compete with one another for attention. On their own, each poster would stand out with expertly chosen colours and eye-catching graphics. Together, the prints form a collage of vivid aesthetics that flows cohesively across the substantial space that it inhabits.

Winnipeg filmmaker Guy Maddin’s My Winnipeg poster is notable among the Urban Ink collection. Maddin’s film, released in 2007, was met with both critical and audience praise. Writers and artists of Winnipeg seem to enjoy portraying their version of what it is to live in this city, an aim that may have gained popularity following Maddin’s highly personal, yet relatable, account of the experience.

What it means to be a Winnipegger is defined anew in every song, text, and image that is produced here. Maddin’s discussion of sleepwalking calls to mind the idea that while being surrounded, having an isolated experience in Winnipeg is common for many of us.

Several years of Reel Pride Winnipeg posters are thrown into the mix. The not-for-profit organization has seen many successful years in its endeavours to showcase queer artists and stories. In 2014 the festival screened at the University of Manitoba as well as the recently opened Canadian Museum for Human Rights, and drew submissions from Toronto and Vancouver. One Gay City, an in-depth look at Winnipeg’s LGBTTQ* community, made its world premiere at the festival in 2014.

The exhibit put on by Urban Ink does more than showcase the company’s eye for design. It reminds us of the vibrant, hardworking, and talented city in which we live. Although months pass that may look and feel grey, the artists, writers, and human rights activists of Winnipeg are sitting in coffee shops, basements, studios, and wandering the streets creating art that replaces the steely cold with warm and lively ideas and concepts.

It has been said before, but it is worth repeating: the cold which we spend so much time hating may actually be the thing that makes this city home to so many, and pushes us to rely on more than sunlight to feel accomplished and successful. It pushes us to connect with each other and the city around us.

Dix ans d’affiches by Urban Ink is on display at Parlour Coffee (468 Main Street) until April 2.

Front and Centre zeroing in on $500 million, province non-committal on $150 million commitment